Integrated into a heritage wharf, the new open-plan offices of BlueScope Steel contrast rough materials with smooth and encourage open interaction among staff

Creating new offices within a rough and ready heritage wharf environment requires a bold design. One option would be to attempt to assimilate the old with the new. Another way is to celebrate the contrast between the heritage and the here-and-now.

The challenge of the project shown on these pages was to relocate BlueScope Steel's Asian Building and Manufacturing Markets division and its building products business BlueScope Lysaght into new headquarters at Sydney's Jones Bay Wharf. The new premises had to showcase the company's products and encourage a sense of team spirit and interaction .

The heritage site is owned by the Sydney Harbour Foreshore Authority and leased as a joint venture to developers Multiplex and Toga. Interior design company Geyer undertook analysis of several sites before finally recommending this space for its dramatic interior which would be conducive to a collaborative and contemporary office space.

"BlueScope Steel has the ground and mezzanine floor, with another floor leased independently above," says Yoon. "One heritage constraint on the fit-out was that there could only be a minimal introduction of interior walls. This worked in well with our open-plan objectives and to some degree directed the course of the fitout." 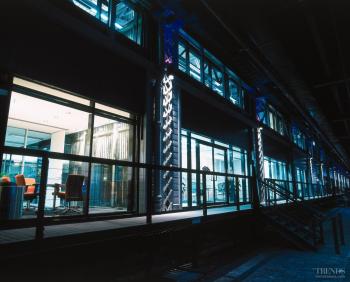 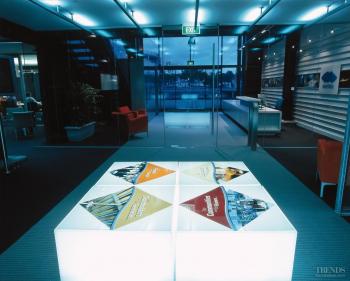 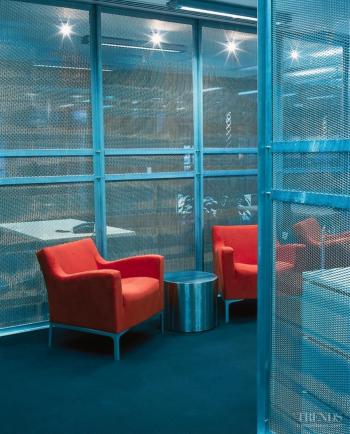 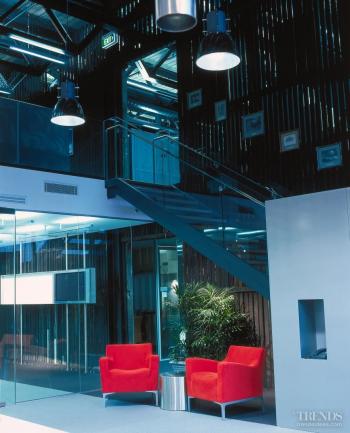 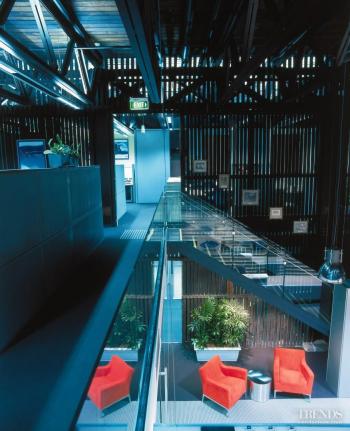 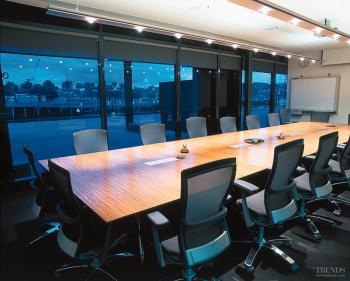 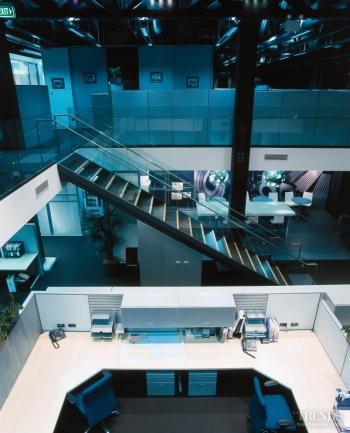 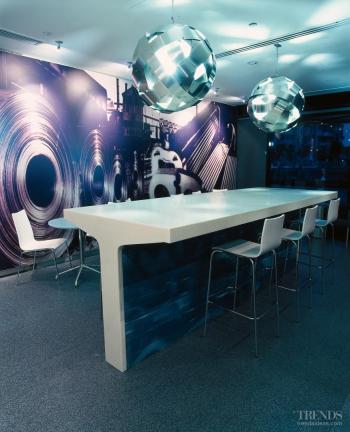 Existing interior slatted walls and exposed steel girders are made into features, contrasted with both high-technology and refined steel elements.

"From first entering the reception area these contrasts are apparent," says Yoon. "On the right is a soaring wall of slatted timber, on the left is the reception desk, coated in metallic Colorbond sheet."

Much of the joinery is finished in steel rather than traditional timber or veneers. Unusual treatments of the company's products are intended to surprise and stimulate visiting developers, architects or clients into considering steel for use in alternative ways. For example, behind the reception desk the company'sLysaght Longline 305 made from Colorbond steel is put to an interesting use as vertical cladding.

Various gathering and waiting areas are partitioned off by expanded steel mesh panels. The coarse, industrial texture of these partitions finds a link with the rough timber slatwork and is an eye-catching use of the material. Occasional seating and stainless steel side tables provide a sleek contrast.

"Features in their own right, the mesh screens are also semi-transparent," says Yoon. "Their use enabled us to retain an open ambience in the office space and adhere to the heritage requirement of not introducing solid interior walls."

Glass is used in a similar way to provide balance and contrast. A more refined metal mesh fronts the office workstations.

Another thoughtful element of the fitout is a security control station opposite the reception desk. This provides a buffer between the reception and secure areas above and houses less attractive practicalities such as a fire hose.

The dramatic volume of the building was already in place, with the mezzanine floor introduced by the developers. Most work stations are situated on this mezzanine and the fitout employed physical and visual connections to draw the space and its workers together, says the designer.

"From almost anywhere in the space it is possible to stand and make eye contact with another worker – be they a junior clerk or a company manager," he says.