Secondary bathrooms are often thought of as less significant than master suites or family bathrooms, with design dictated by function rather than form.

When the owners of this family home decided to renovate the bathroom attached to their son's bedroom, as well as upgrade their guest facilities, both function and aesthetic appeal were of paramount importance.

Robert Reid, of architectural design firm Brooks Reid Studio, says they were asked to design the first bathroom for the client's five-year-old son. It needed to be appropriate for him while he is young, yet sophisticated enough to adapt to his developing tastes.

"The son was an integral part of the design process. He was involved at every design consultation, and actively contributed to the creative process," says Reid.

Reid describes the child's originalbathroom as very dysfunctional, with little usable storage space. A large, built-in, L-shaped cabinet stretched from one corner to another, leaving only a small space for a shower – a mere 30sq in – with a narrow 18in door. Subsequently, the shower was seldom used. 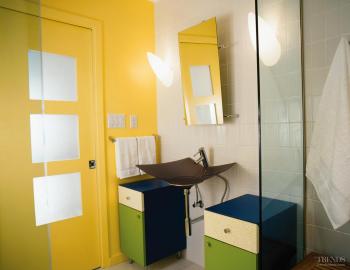 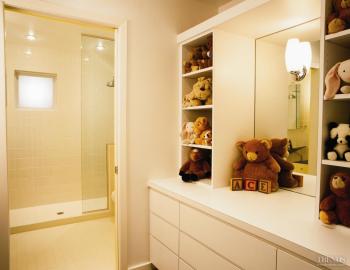 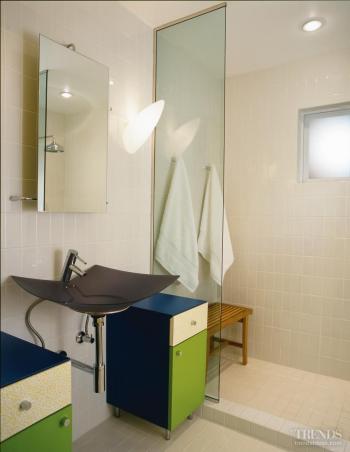 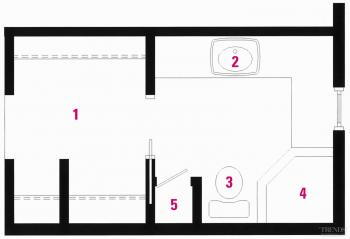 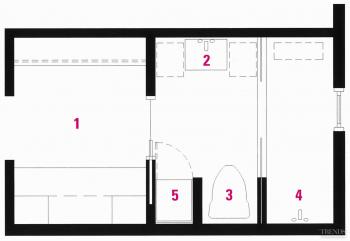 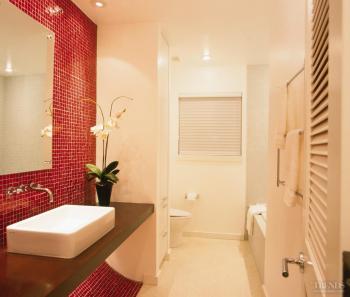 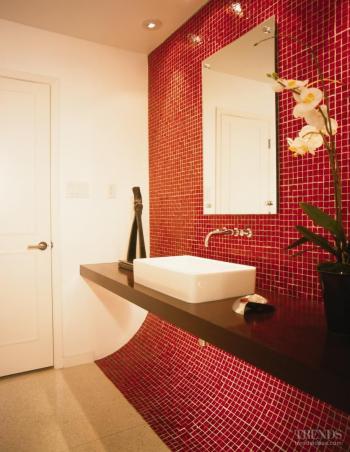 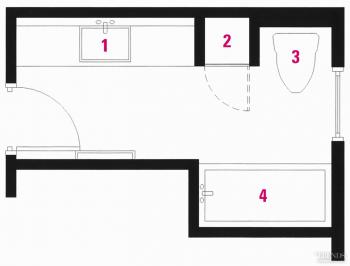 "With two other full bathrooms in the house, the clients knew they didn't want a tub added to this room, but they did want a shower that was actually accessible. We retained the room's existing footprint and stripped existing fixtures and fittings to allow for greater use of space," says Reid.

The new shower unit is a fully tiled space, almost 8ft long and 32in wide. The shower has a rain type head and aseparate hand-held spray head.

A teak bench allows the son to sit while showering, and also provides space to store toys underneath.

The new sliding door between the bathroom and walk-through closet is painted yellow, currently the child's favorite color, but can easily be changed as he gets older. Two mobile pedestals, and a built-in linen cabinet, can also be re-coated with colored laminates.

The guest bathroom is designed to be a feature room, with red glass tiles used as a three-dimensional sculptural element. The curved base creates a focal point that gives a carved quality.

"The curve of the red glass tiles came about almost by accident," says Reid. "When we removed a built-in vanity, we discovered a 3in recess caused by the pouring of the terrazzo floor around the existing cabinetry. Faced with two floor levels, we built up a curve at the back of the wall, bringing the tiles into alignment with the existing floor. The new curve solved the problem, plus added visual interest and an aura of unexpected drama."

A 7ft wenge wood counter, suspended from the two end walls, appears to float above the tiles. The effect is enhanced by a gap between the wall and the shelf, allowing the overhead lighting to cascade past the counter and onto the curved base.

"Lighting can make or break a space," says Reid. "In this case, the red tile wall is lit from above with directional lighting. Light washes over the wall, grazing the back of the wood shelf, illuminating the arc. This causes a shimmer that highlights textural nuances."

The original oversized steel tub was removed, as one of the owners felt uncomfortable in the large bath. A standard size combination air-and-jetted tub was added. White glass mosaic tiles surround the tub and act as a textural detail.

"There's a clean simplicity to this bathroom," says Reid. "It has an almost machined precision, without feelingmanufactured."