Stealing a little space from an adjoining room is a common way to expand a bedroom suite, but the architect of this beach house remodel looked up to find his inspiration.

Architect Jeff Tohl of The Architecture Studio says the floor of a disused loft above the suite was removed to open up the entire space to a high vaulted ceiling.

"Most of the attic was positioned above the guest bathroom, but it also extended over the bed, so the ceiling was lower in this part of the room," Tohl says. "The loft did have novelty value when the owners' children were small, but was no longer required. The roof in this part of the house was also in a state of disrepair – the loft had old birds' nests and vines creeping through cracks."

The roof, ceiling, exposed beams and cross ties were repaired, and painted white to create a light and airy feel, and to make the space seem larger. Two porthole windows were added to the gabled ends, providing an appropriate nautical reference and letting light into the top of the room.

"We could have split this floor into two rooms, but chose to have one large open space running the entire width of the house," says Tohl. "It provides plenty of flexibility for the owners, in terms of accommodating guests." 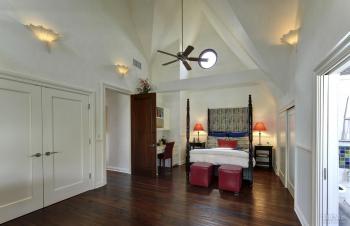 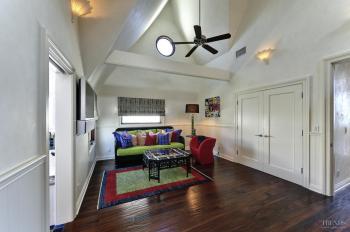 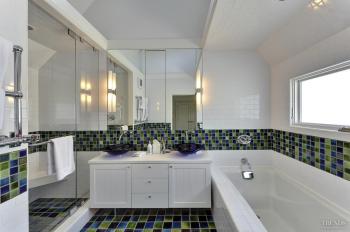 The guest bathroom also features exposed, white-painted rafters and ties. Symmetrical vaulted niches on either side of the room are fully lined with white tiles. For contrast, a band of sea green and blue mosaic tiles wraps right around the perimeter, matching the floor tiles.

"Fitting everything into the relatively small space was a challenge," says Tohl. "For this reason, the vanity cabinet is lower than standard, and cantilevered to minimize its impact. Vessel basins that sit on top of the vanity bring the height back up for guests' convenience – the blue glass also works with the setting."