Commuters heading into Auckland have sped past an undeveloped, unremarkable area of Parnell for years – with no pedestrian links and no railway station, there has never been a need to stop.

But the potential of the city fringe location – the site of the former Carlaw Park stadium facilities, is undisputed. The site borders the leafy green Auckland Domain, is close to the Parnell retail centre, the University of Auckland and key arterial routes, including motorways and rail links.

Joint venture developers McDougall Reidy and Haydn & Rollett Construction, who had already developed other parts of the site, commissioned Warren and Mahoney to design new community-oriented student accommodation for the University of Auckland.

Design architect Shannon Joe says the vision for the Carlaw Park Student Village was not just about meeting the immediate needs of the students. It was also about a wider vision for the city.

"For so long this part of Grafton-Parnell has been disconnected from the city centre, with pedestrian links severed by the Grafton Gully motorway. We envisaged this development opening up a new corridor leading to Parnell Road, the future railway station and the Domain in one direction, and the university in the other." 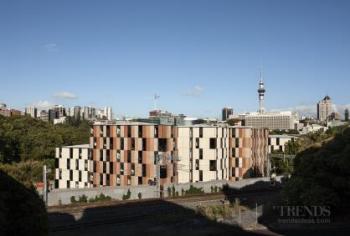 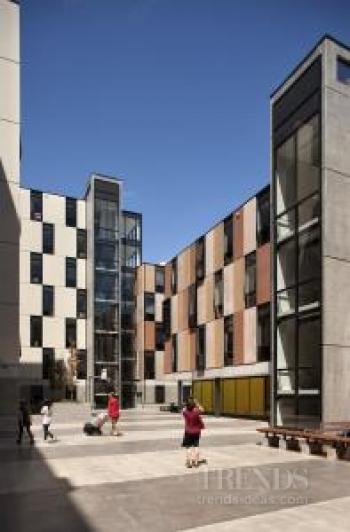 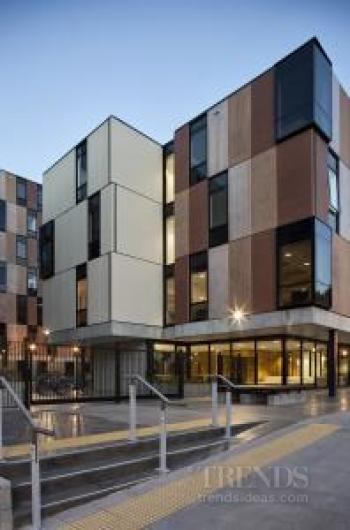 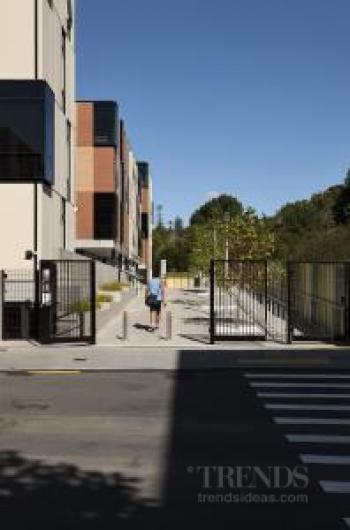 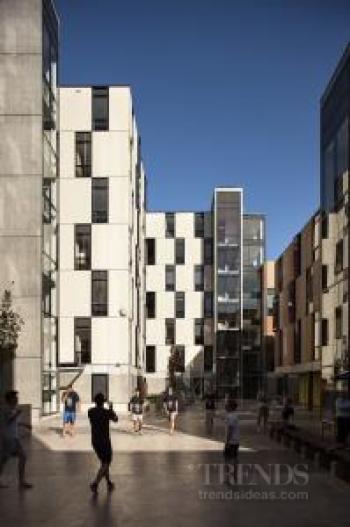 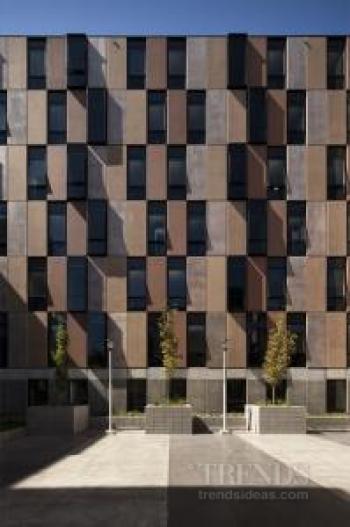 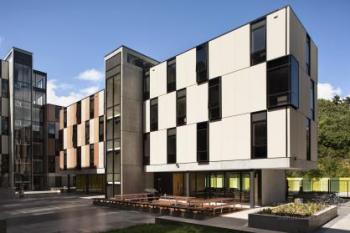 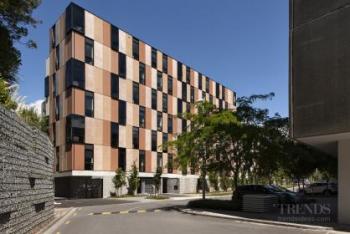 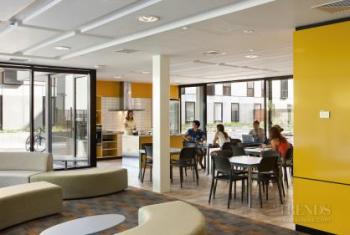 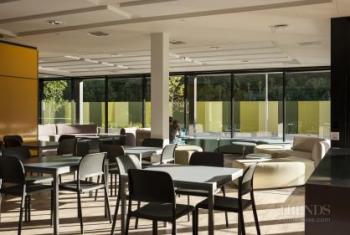 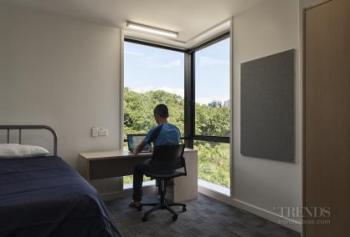 The four buildings in the village are consequently arranged along this axis, providing passive surveillance for the pedestrian route, which is open, by day, to the public as well as residents. The key circulation routes also form courtyard-style gathering spaces for the students.

"The University of Auckland wanted a student-centric project. The village provides apartments rather than traditional hostel-like accommodation, which is a nice transition from University Hall, located at the city campus."

Joe says the site did pose a dichotomy in terms of the architectural aesthetics.

"On the one hand we had the natural, leafy aspect of the Domain, and on the other the gritty, hard-edged urban nature of the rail corridor. We felt a need for natural materials that would reference the park. But there was also an obligation to create a gateway to Parnell and the rail station, so the buildings needed to be extremely robust, low maintenance and of a highly durable design. The pixellated facade, consisting of honed concrete, exposed aggregate and fair-faced concrete panels, evolved from these references."

Joe says the gradient of the textures on the panels provides visual depth and variety, and mimics elements of the natural landscape. The colours will deepen and the stone chip textures become more pronounced as the panels weather.

"The colours bring a warmth to the development. But we contrasted this visual warmth with more urban and bold monolithic boxes."

The exterior is also animated by glazed circulation areas and stairwells. And, although the internal planning of the apartments is regular and efficient, the pop-out windows are manipulated to provide variation and movement across the facades. This ensures each building has a high degree of articulation, with depth and shadow, and a sense of human scale and proportion.

The architect says the development needed to be intensive to be cost efficient. But this didn't mean good design was compromised.

"Intensification has a negative stigma in the city, due to many high-density buildings going up without much thought to design principles," says Joe. "We set out to create a benchmark that would show high-density living can work when it is done well. The buildings have been capped at eight storeys, and all the apartments have plenty of natural light and views of the park and city are maximised through full-height glazing."

Warren and Mahoney recognises that pedagogy learning principles are not limited to lecture theatres, classrooms and libraries – it also takes place in social and living environments. Consequently, there are myriad places for students to group, both indoors and out. The common room has a kitchenette that can be used for MasterChef-style cooking demonstrations, providing another learning opportunity. Communal lounges and study spaces have also been provided.

"The sense of community is very strong, and is precisely what we set out to achieve by creating a campus-style living environment," says Joe. "Students can be safe, comfortable and secure and know this place is home."