It must be one of the most common issues in a home renovation – how to expand the functionality of the interiors for modern living without downgrading the classic facade. One way is to appropriate space wherever you can, and meld the old and new through detailing.

This makeover of a 1900s two-storey villa by Tse:Wallace Architects started out with a modest brief for repairs and maintenance throughout. However, after discussions with the owners on how best to improve the existing interiors, this developed into a comprehensive renovation, says project architect Liz Wallace.

"The two-storey house sits on the edge of an east-facing slope overlooking Wellington, and it was decided to make the most of these views," says Wallace. "At the same time the interiors had to be revamped to better suit the needs of a large, teenage family. Plenty of wall space for artworks and storage was also required.

"A key planning move was to lift a section of the roof and expand the formal living space. Ribbon windows were extended across the new facade to optimise the outlook. We adhered to the existing roof and facade detailing faithfully, so it is quite hard to see where the original facade ends and the new begins. This was important in a character neighbourhood where most homes have a traditional aesthetic."

A side veranda, seldom used due to its small size, was reclaimed as part of the living room interior, which extended the space. 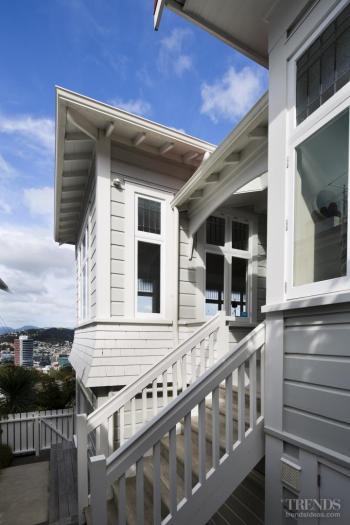 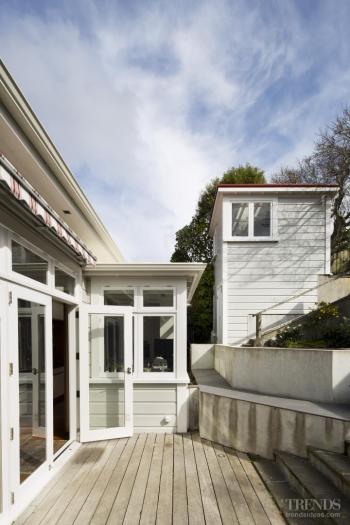 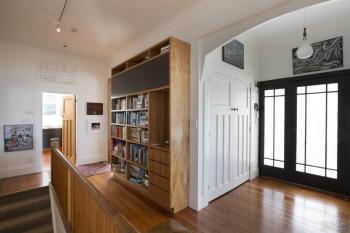 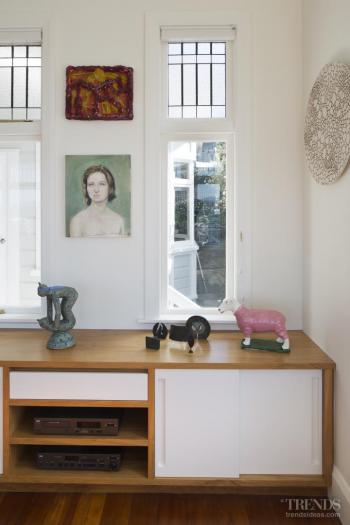 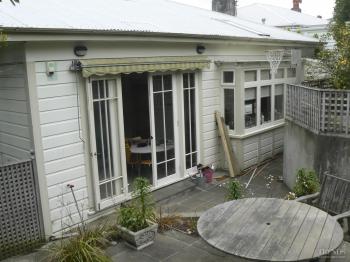 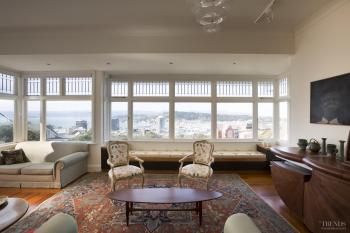 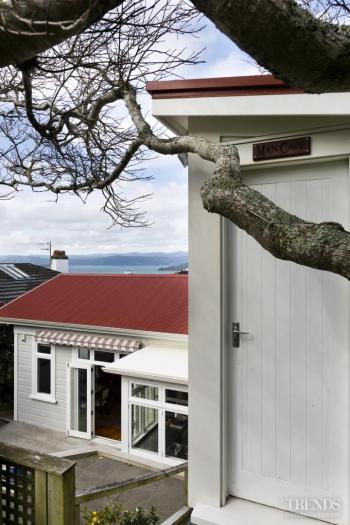 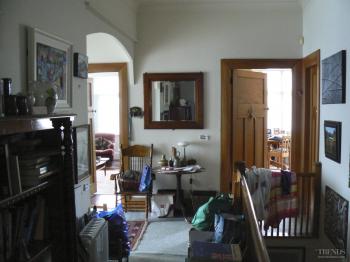 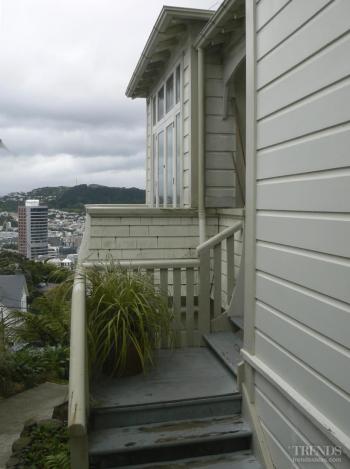 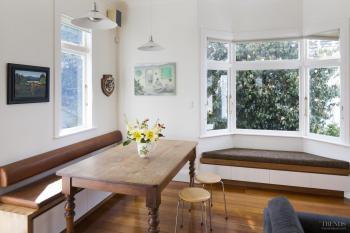 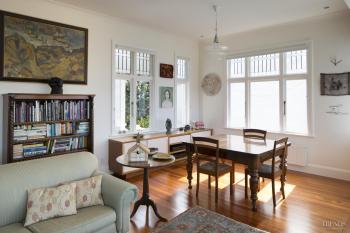 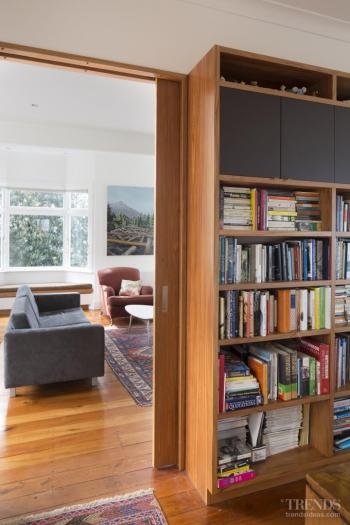 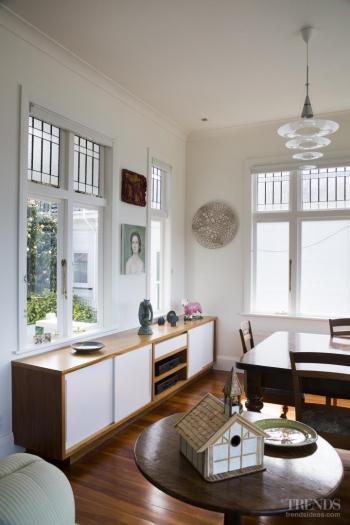 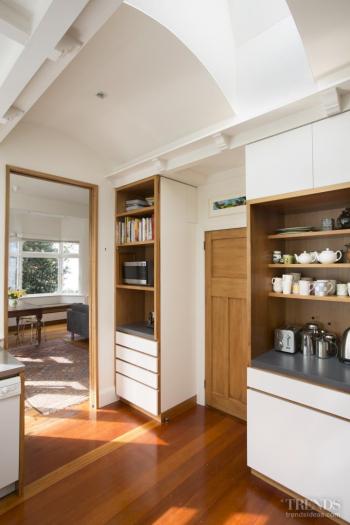 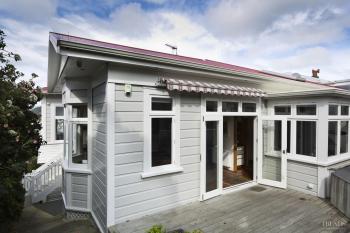 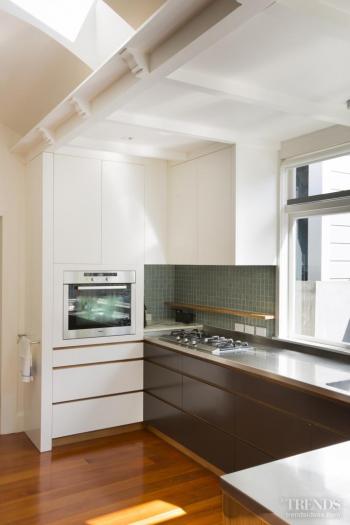 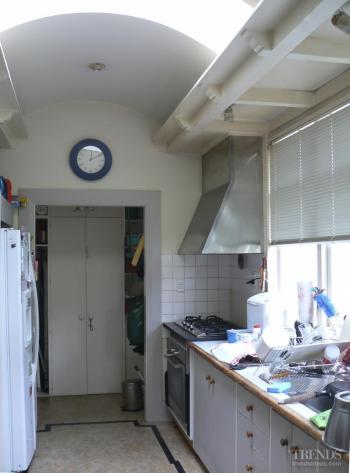 "By raising the roof in the direction of the views, we reconciled ceiling heights and created a more lofty, airy ambience," says Wallace.

All doors and windows were replaced in the renovation, with doorways heightened to add to the sense of light and space. The doorway between the entry foyer and living room was opened up to further increase the feeling of lightness and space. The stairway was updated and bookcases and drawers installed along one wall of the entry area.

"We needed to add sufficient storage for four teenagers and two adults – previously the home had been bulging at the seams," Wallace says. "The answer was to build in cabinetry or shelving elements where we could. However, this was balanced by the need to keep some wall space free for the art."

The family room and kitchen leading off the other end of the hall were also modernised.

"The family room had to act as dining area and media room. To achieve that within the same footprint, we added a window seat and again built-in cabinetry," Wallace says. "The kitchen has been transformed and expanded, with more windows added to flood natural light onto work surfaces."

All light fixtures, cabinetry and finishes in this project are distinctly modern. The approach to the detailing was to consider the materials of the existing house and marry them into the new work in a contemporary way. For example, the recessed pulls on the kitchen cabinetry reference the wider use of wood throughout the home.

Existing architectural mouldings were kept and the original matai floors were retained and matched. The generous use of wood and white surfaces helps draw the spaces together.

Other aspects of the job included reinventing the bathrooms on both levels. The interiors were relined throughout and new heating, electrics and lighting installed. Exterior work included a new deck, shed, outdoor storage and entry path.