A simple material palette, attention to scale and an orientation to the view give this house a dramatic presence and a sense of place

An important aspect of a home's make-up is its setting. This can govern the orientation, its spacial distribution and, in terms of city zoning regulations, even the shape of its roof.

For the house shown on these pages, location was a central factor in the design. Situated on a waterway, the owners wanted to maximize the view at every turn, and at the same time not end up living in a glass box, says Craig Barry of Singer Architects.

"Strict city zoning regulations also played a part, particularly in terms of the exterior," says Barry. "Restrictions placed on the use of finishes and roofs lead to the use of stucco and a sloping roof."

The resulting T-shaped house features sweeping white stucco walls with architectural cut-outs and detailing, and a copper roof. A colonnade of columns at the pool deck adds sculptural interest and also works as a framing element through which to view the scenery.

"A modest entry to the house provides an understated introduction to the entry hall inside the doorway," says the architect. "A soaring, two-story space created from giant slabs of smooth architectural concrete neatly divides the house. Off to the left is a formal living space, and to the right a more intimate wing, which includes a dining room, guest bedroom, and the kitchen." 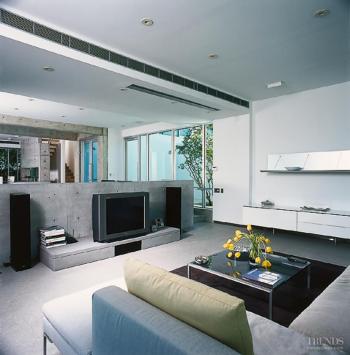 The exposed concrete surfaces that form the finish on the walls feature the remnants of steel placement rods that were integral to their construction. Bearing the resulting pattern in mind, the placement of the formwork rods required careful consideration before the concrete was poured.

"Underfoot, polished ridged concrete complements the architectural concrete overhead," says Barry. "With tiling to the right and carpet to the left, a polished concrete corridor follows the double-height void overhead."

A bridge above the entrance, also fashioned from concrete, connects the two sides of the home on the upper level.

"Opposite the entry, at the other end of the polished concrete strip, there is another, mirror-image bridge," says Barry. "This enables complete circulation around the upper story."

Most rooms in the house have a view over the waterway or the pool. The dramatic scale of the entry orients visitors straight ahead and to the view beyond.

On the dining room side of the open-plan space, concrete walls conceal the staircases. The generous use of concrete in the interior is offset by anodized window and door framework and the widespread use of glass in terms of glazing, work surfaces and table tops.

"The decor has a strong linear element to it and a linear diffuser air conditioning system was chosen to complement this in both the open-plan space and in the kitchen area," says Barry.

While the material palette within the home is kept simple, there are unusual touches as well. The baseboards are created from stainless steel throughout the house.

The kitchen combines this element with a stainless steel backsplash and stainless steel appliances. The kitchen cabinetry is made from pear wood, in a matte finish, chosen by the owners for its rich, warm tones – a contrast to the cooler, metallic materials. Thick glass countertops were specified by the owner – a material that also features on the kitchen table.

The upper floor, reached by two sets of open wooden stairs, contains a master bedroom and bathroom on one side and more bedrooms and a children's playroom on the other.

On one side of the central void, reached by the concrete bridges, lies the master bedroom and master bath.

A glass window in the master bathroom overlooks the central void. A railing wall, much like the bridges also looks down on this open space from the playroom on the other side of the void.

The master bedroom is reached by walking through a pair of corridors flanking this bathroom.