When your main residence is a picture of sleek refinement, it is not too surprising to prefer something less formal for your waterside retreat.

For this remodel, designer Mick De Giulio and interior designer Janet McCann were asked to bring an appropriately relaxed ambiance to what had been a rather small, nondescript cabana. The clients also wanted to optimize use of the available space, which was around 390sq ft, and the views to the water, says De Giulio.

"In contrast to the clean lines of their apartment, the owners wanted this space to have a natural, even primitive, feel, which is just right for a beach house," says De Giulio.

Major changes included extending the mezzanine and kitchen, adding a new staircase and a revamped bathroom.

The designer added small whitewashed beams to the ceiling over the kitchen area and hand-scraped cedar boards, reminiscent of driftwood, on the main ceiling of the cabana. Making the kitchen longer allowed De Giulio to create an extended run of cabinets. These are in a similar pale tone, in walnut wood that has also been whitewashed and scraped to reveal the grain. 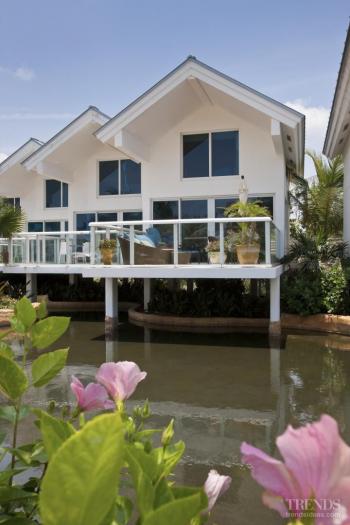 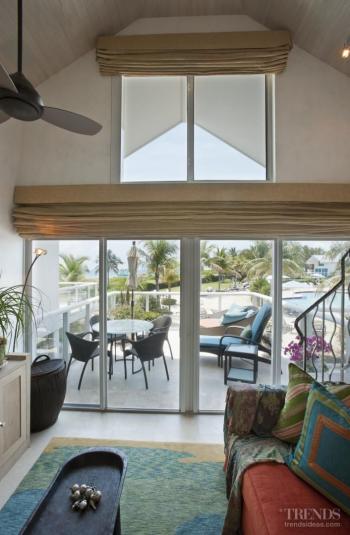 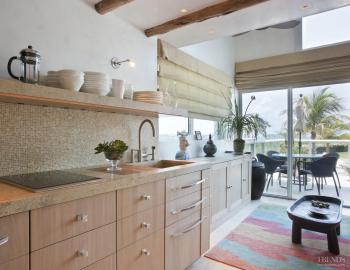 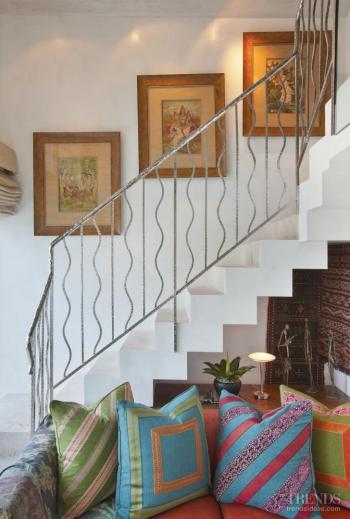 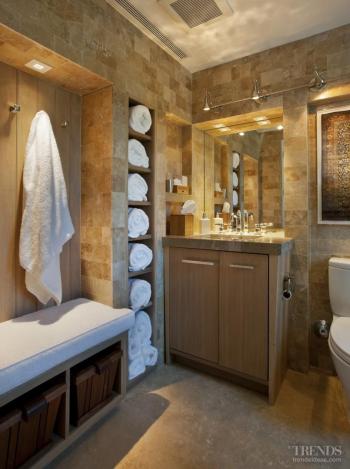 "I created the cabinets on the lower level as two sections, playing down the proportions to avoid a shoe-horned look. Designed to have a sense of individuality, the kitchen block has stepped-out end elements, while the cabinetry in the living area is set back."

One of the most dramatic elements of the remodel is the new staircase, which has an organic, sculptural appeal.

"I plastered the stair to look like part of the wall," says De Giulio. "The treads and risers are limestone, used back side up for added texture and to prevent slipping."

Upstairs, the metal railing transitions into a frameless glass balustrade, so someone lying in bed can still look out the upper window to the pool beyond without obstruction.

The scraped and bleached sloping ceiling here is in similar hues to the cabinets and ceiling beams on the lower level. This element, with its rough-hewn crossbeams, brings a cozy feel to the bedroom.

The bathroom is similarly restful and relaxed in style. The stone vanity top has rough edges, as though broken off, and the tapered leg elements and doors are differing widths.

Interior designer Janet McCann says vibrancy of color was integral to the design.

"An initial cue for much of the decor was the owner's Indian paintings on the stairs. The custom rugs in Afghani style follow this color intensity and have a textured feel appropriate to the emphasis on natural, exotic materials."

The bedspread continues the theme, while the pillows have an embellished, textured finish, a little like the ethnic paintings on the stair.

"While making the most of the sunlight and views, we also had to be able to mitigate them to provide comfortable television viewing.

"I created Roman shades in a gauzy fabric that would block the light and add to the textural emphasis."

McCann configured the blinds so they would sit only on wall space when pulled up, ensuring unimpeded views.

"Texture, color, and crafted pieces create a casual feel, but every element has been closely considered," McCann says.