A fountain, water features, specialty lighting and diamond dust in the decking make this pool and outdoor area more than just a place to swim

In warmer climates, the swimming pool and its surrounds are often a seamless continuation of a home's indoor living spaces.

Achieving this result was the key purpose of renovating the pool and outdoor entertainment area of this clifftop home.

Interior designers Janet Bussell and Barrie Livingstone had already renovated the house, which is often usedas a location for filming movies and fashion shoots. They were then asked by the owners to update and enlarge the pool and spa to make them more inviting.

"They wanted the pool to become a focal point of the outdoor living space, rather than just a place to hang out or swim, " says Bussell.

Dated design elements of the original pool and house were eliminated and the pool was enlarged. Lighting, a fountain and water feature were incorporated to create the focus the owners wanted. 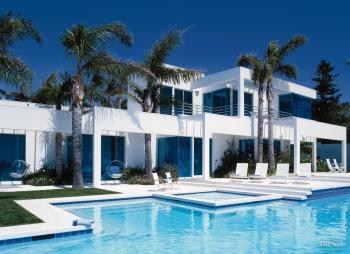 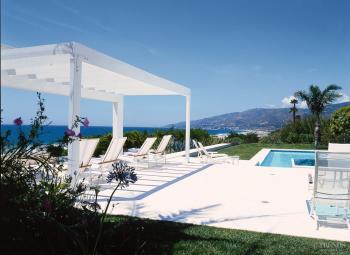 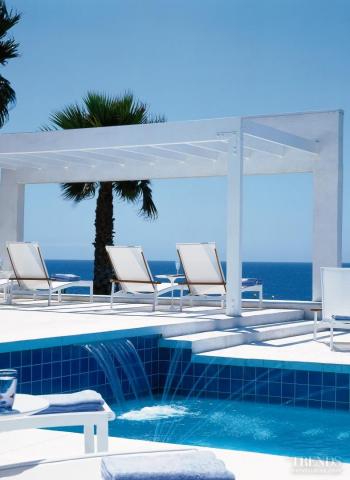 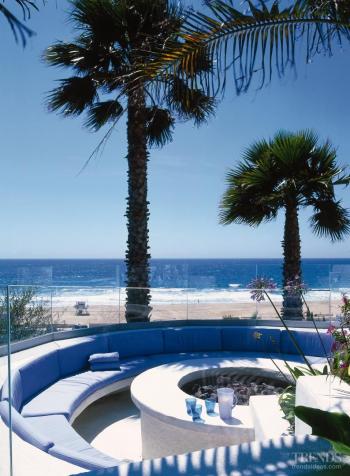 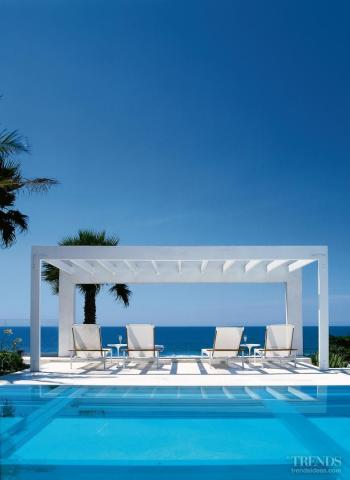 "Lights on a rotating colour wheel can progress from shade to shade, giving the pool the appearance of movement at night. To make it even more spectacular, the fountain can be directed to spray across the pool," Livingstone says.

"The same simple, modern approach the owners specified inside characterises the pool area, so the outside space is really an extension of the structure of the house," he says.

To underline the connection between the inside and out, the designers chose the same frosted Azure-lite glass doors for the cabana as were used in the house. Glass tiles in the pool match with the lilac blue theme used through the house, and the ultra-bright shade of white chosen for the stamped concrete deck was specified to create a connection with the pure white Thassos marble flooring inside. The deck is honed with diamond dust and Thassos powder to give it an extra sparkle.

Built-in circular bench seats overlooking the ocean are made from the same ultra bright white concrete as the deck. This material also appears on the floating catwalk that separates the spa – which can accommodate 15 people – from the pool.

Blue and white planting continues the colour theme around the pool.