Renovating a kitchen often goes hand in hand with renovating the open-plan living space that surrounds it. In this scenario, the two renovations can be mutually beneficial – the house renovation providing a spacious, contemporary setting for the new kitchen, and the kitchen providing a visual feature for the greater space.

Such was the case for this home. Architect Roger Walker opened up and extended the back of the house, and kitchen designer Simone van der Plas created a new kitchen where the home's original dark, narrow galley workspace had been.

Walker says that the home was extended out to maximise views and to increase the size of the living spaces. Comprising an additional room that steps down from the original kitchen, dining and living area, the renovation features extensive glazing and bifold doors that open onto a new deck.

"This design is mindful of the new kitchen in several ways," says Walker. "Firstly, a realignment of interior walls provided the kitchen designer with additional space; secondly, by stepping down to the outermost room, occupants of the kitchen can look out and over the entire space. Thirdly, banquette seating by the windows encourages people to occasionally sit with their backs to the scenery, and instead look towards the shiny new kitchen."

The kitchen itself is also a direct response to the needs of the family, says van der Plas. 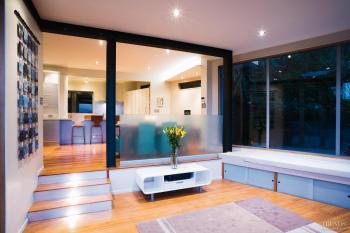 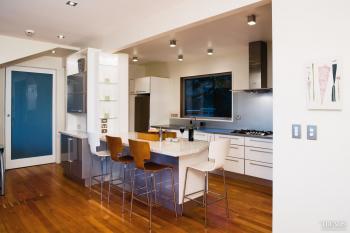 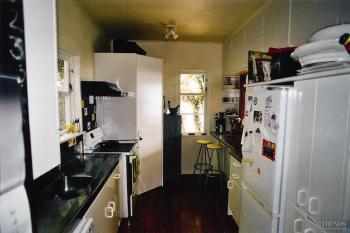 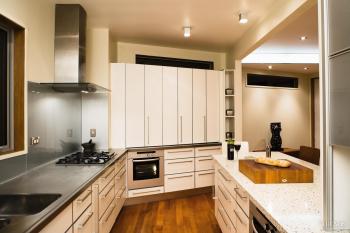 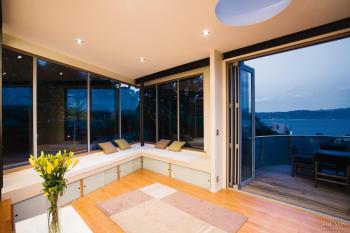 "The father of the house is a keen cook and to this end the island countertop is basically one large work surface," she says. "He specifically wanted the surface to be clear, hence the sink is in the main preparation area at the rear of the kitchen."

The new kitchen is also designed for two to use at once, says the designer. The ovens are set apart, with one in the island for cooking needs. And there is ample space between island and wall cabinets for two to move comfortably.