Good fences make good neighbours as the saying goes. But what if your neighbour is a family member? Is there even a need for a fence?

In the case of these bungalows, a family relationship between the two owners meant that the design of the houses, while needing privacy from the street, did not need to be completely closed off from each other. The result is an efficient use of space on two relatively small urban sites.

Designed by architect Han Loke Kwang of HYLA Architects, the houses appear symmetrical from the front, though they have variations in window size and placement. A mix of materials used on the exterior also adds visual interest.

"There is an intrinsic play between solid and translucent objects which connects them despite their contrasting attributes. But there are also practical reasons behind their use. For example, the solid mass at the front of the house is there to protect it from the extremities," says Han.

Two separate carports at the front of each house have wooden slat doors that slide across to reveal the courtyard beyond. 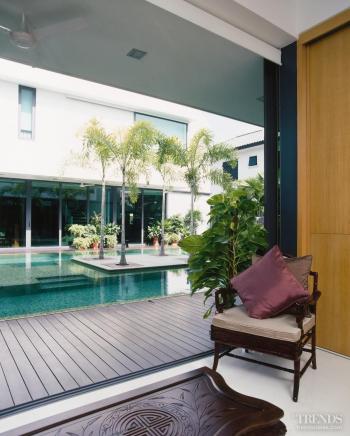 "The courtyard was central to the brief in that it was something the two houses should be designed around and all the main living spaces should point towards," says Han.

The area is dominated by a 15m-long swimming pool that is surrounded by hardwood decking. The pool has a shallow strip running through it delineating the boundary line of the two sites.Along this strip a wall or fence could be built to seal off each property if either house were to be sold.

Part of the shallow section is raised above the waterline and appears like a island. Palms here, and other lush tropical plantings, add a resort feel to the outdoor setting.

Each house spans three levels, with the main living areas on the lower storeys. A series of sliding doors along the decking allow a number of entrance points.

The doors can also be folded back against the wall opening up the entire floor to the pool.

Beneath the stairwell, a pond continues the water theme and with the light-coloured tiling adds a cooling element to the interior. An internal void extends the full height of the house allowing natural light to flood the interior and also creating sight lines between floors.

"The void acts as a visual connection for everybody in the house. You can be on the top floor and still feel part of what's happening around the pool," Han says.