Cloud busting smokestacks and steel skeletons encased in brick and concrete are the compelling features of iconic industrial architecture from mid-last century. Protected from demolition and modified for contemporary use, these structures add drama and complexity to the urban environment.

With Bankside's Tate Modern and Battersea's Power Station, London is home to two of the most instantly recognisable examples of this building style. However, other European cities, such as Helsinki, have also moved to protect similar heritage structures, earmarking them as critical components in plans for urban rejuvenation.

In this instance, the former home of Finland's state alcohol monopoly – the Salmisaarentalo Building – was converted into a courthouse and office complex. Owned by property investment firm Kapiteeli, the renovation was carried out in association with Finland's National Board of Antiquities, who recommended the building's monolithic facade and mushroom columns be preserved. The question for architect Tuomo Siitonen was how to bring a contemporary aesthetic to life within the existing structure.

"It was clear from the outset that the conversion would require some interference with the existing structures, as well as a radical change to the interior," says Siitonen.

"At the same time, the rationality of the dimensions and the clarity of the old industrial building provided the inspiration for the design. Our objective was to establish a congenial dialogue between the old and the new, so the new elements also follow principles of authenticity and simplicity." 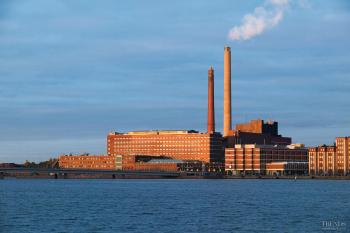 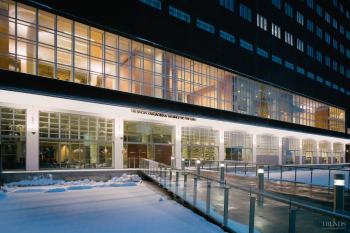 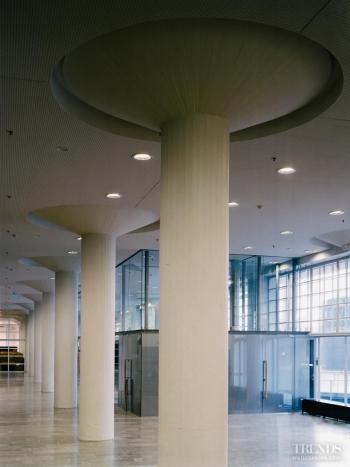 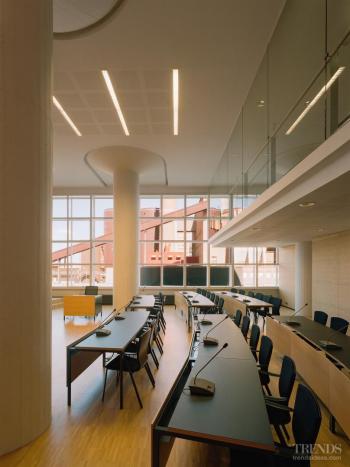 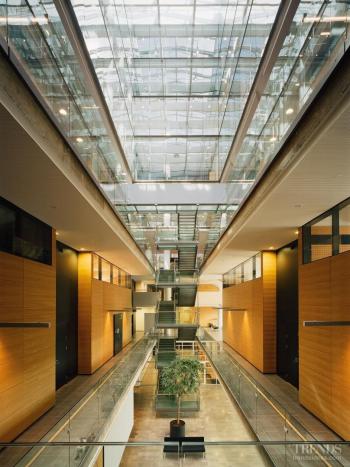 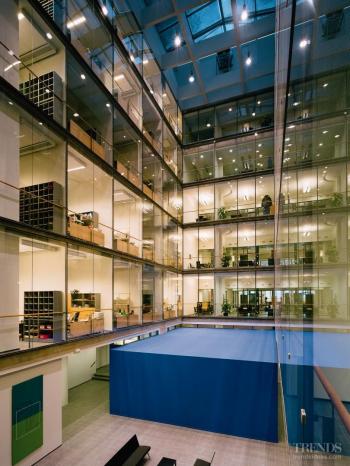 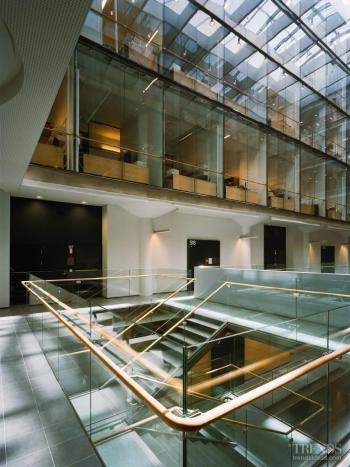 One special problem posed was the need to establish a working environment that would meet requirements for natural light in the workplace.

"The placing of new apertures in the seaward facade follows the original principle of creating a counterpoint to the volume of the building: vertical in the lower wing and horizontal in the taller, central building," says the architect.

"No changes were made at the corners of the building, or at its southern end, to avoid compromising the solidity of the brick volume."

To counterbalance the brick surfaces, lightweight steel window structures were retained, with the only change being the addition of heat control glass. Inside, the floor heights increase from the top down. The courtrooms, with their need to accommodate large numbers of people, were located on lower floors, with office space positioned above.

"Some surgical measures were needed to bring natural light into the small offices and to aid orientation in the public spaces," says Siitonen. "Two light wells were cut into the body of the building. To make the best possible use of natural light, the main staircases rising in these light wells were constructed from suspended steel frames, with the horizontal planes made of sandblasted glass."

Besides the large volume of brick, which conveys a sense of reliability, the architecture of the building has other features which were deemed a good fit with the public image of the judicial administration. One such feature is the concrete mushroom pillars, designed to withstand loads of several tonnes.

"In the courtrooms the interior wall lines are not adjacent to the pillars. The pillars stand freely in the courtroom, lending structure to the space and emphasising verticality," says Siitonen. "In contrast, the office walls are located on the pillar lines or between them. The resulting 6.5m modules provide pleasant 3m2 offices."

Retaining the pillars as visible parts of the interior required the installation of new technology without the camouflage of lowered ceilings to cover ducts. Dispersed from two plant rooms on the roof, the ventilation system features vertical ducts running directly to the required areas.

Another design problem was establishing internal traffic arrangements to comply with security requirements. The main public entrance is positioned on what was a spacious loading dock, while people brought to court from police custody enter through an old bottle return station, and continue to courtrooms through an isolated series of passages.

To acknowledge the building's heritage, materials and colours were selected with regard to authenticity: natural materials in natural colours. The restricted colour scheme leaves scope for artwork. Impressions left by batten moulds on the concrete and through-holes made for distillery piping were also retained.

"Historical layers and the existence of the time dimension are basic prerequisites for an engaging urban milieu," says Siitonen.