In the mid 1920s Spanish Colonial Revival architecture was prevalent throughout California. This new house reinterprets the revival style – and better equips it for the 21st Century

Looking to the past can often provide the inspiration for the present – especially in respect to house design. After all, you can be fairly sure the architectural style adopted by the locals a hundred years ago was a direct response to the climate.

In Santa Barbara, California, it was the Spanish Colonial Revival style that made its mark in the 1920s. As the people of southern Spain had discovered centuries before, the thick-walled, white-washed houses with their high vaulted ceilings and cool courtyards were the perfect antidote to the long, hot, dry summers.

It was this style that architect Mark Kirkhart adopted for his own house – a design he describes as a reinterpretation of what had been reinterpreted before.

"Santa Barbara has a Mediterranean climate, very similar to the parts of southern Spain where this architecture has it roots," Kirkhart says. "And while we have incorporated many of the features of those traditional European farmhouses, we have also introduced elements from the revivalist era, such as the steel mullioned window systems that allow for large windows that maximise the views."

Kirkhart says the L-shaped house was positioned in one corner of the triangular site. This siting provides a private, sunny, wooded outlook, which includes borrowed views of trees in neighbouring properties. 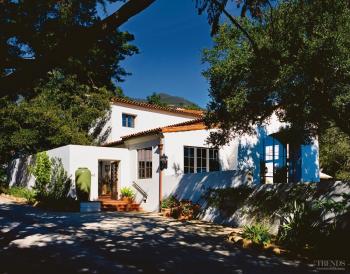 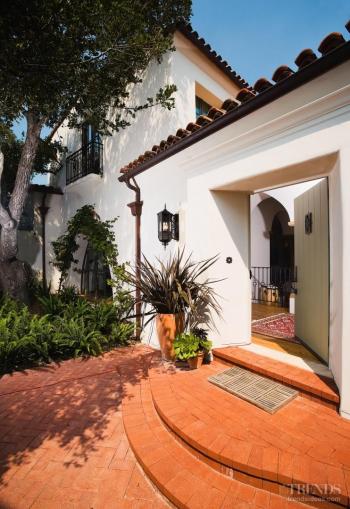 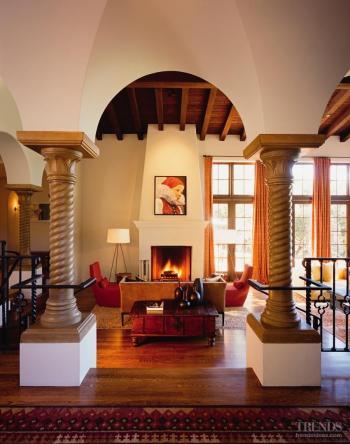 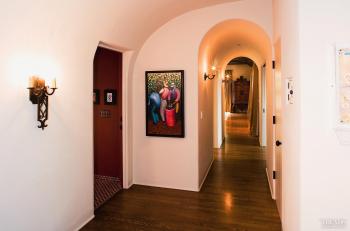 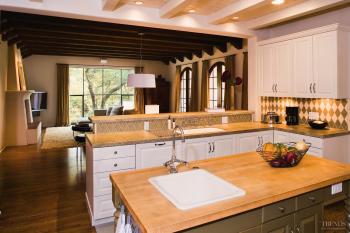 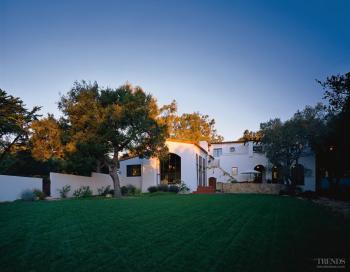 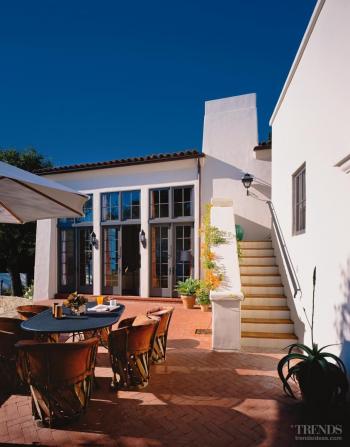 Because the driveway is shared, a traditional Moorish walled courtyard entry proved ideal on a number of counts.

"The courtyard, with its fountain and existing oak tree, is an intimate, transitional space that prevents the front door opening straight onto the driveway. It's a typical Spanish design that also has the advantage of acting as a decompression zone, providing a calming influence as you move from a public area to a more private space."

Inside the house, Kirkhart's desire for authenticity is further in evidence with the strong attention to detail.

"The proportions of the rooms and the elements within these spaces have been very carefully thought out," he says. "For example, all the window panes, including the large windows and the smaller panes on the French doors, are the same proportion – a vertical golden rectangle. It's a very calming proportion that works well on a design level."

Plastered walls and ceiling treatments also reflect the Spanish Revival influence. As well as heavy wood-beamed ceilings in the living areas, there are vaulted ceilings, triple arches and spiral columns in the transitional spaces – similar to traditional European cloisters. The formal dining room, which looks into the entry courtyard, also has a vaulted ceiling, which helps to create an intimate ambience.

The fireplace in the formal living room has a tapered, plastered chimney – its verticality and proportion designed to balance the 4.5m-high cathedral ceiling.

Traditional Moorish pointed arches are another leitmotif that appear in key areas – notably the dining room, master bathroom and a fireplace in the loggia.

"Also known as a Saracen arch, this design appears in mosques and churches throughout the south of Spain," says Kirkhart. "The Moorish connection was the springboard for ceramic tile motifs throughout the house."

"Part of the success of a Spanish Revival house is to be able to provide an immediate sense of history," says Kirkhart. "You can almost believe other people have lived here and had their hand in how it looks. It's about not being too predictable, but giving the house a life of its own, creating something a little quirky, with plenty of character."

In keeping with this approach, the ceiling in the family room is plastered between heavy wood beams, while the adjoining kitchen ceiling is lower and painted white.

"The kitchen is an interior room. It would have been too cavernous to make it high and dark," says Kirkhart.

"We wanted a highly efficient, gourmet kitchen. A separate 3m x 3m butler's pantry becomes the command centre when we are entertaining. It accommodates a wine closet and audio centre, as well as additional dishwashers and food preparation areas."