Looking out to the thriving urban hubs of downtown and southern Perth, The Peninsula creates a new denizen attraction just across the Swan River to the south

Historically, Apartments have been viewed as a poor cousin to the freestanding family home – the state housing complex traditionally providing a poor advertisement all on its own. But apartment life today offers urban proximity, diverse living options – be it child-free or familial – and grouped social environments akin to a small, central country village.

The Peninsula residential complex from developer giant Mirvac is at the cutting edge of this modern take on apartment living, consisting of a variety of flexibly designed apartments and contemporary residences, grouped loosely round a central village green. Buyer options include tower apartments of varying sizes, podium apartments at the base of the towers, large three-storey terrace homes encircling the village green, and ‘courtyard' houses. Construction is also well under way for additional residences fronting onto a bordering golf course.

Central to the ethos of the project is a diversity of living options, uninterrupted views across the city, Swan River, and golf course and an intimate lifestyle environment, right down to in-situ retailers. To this end, a health spa and a restaurant/delicatessen can be found at the base of the central towers, The Allegro and Axis.

Market response to The Peninsula has been immediate and ongoing since its first release two years ago. Beyond the above incentives, there are several other reasons behind the residences' off-the-plans popularity.

Mirvac's sales and marketing director in Western Australia, Peter Gianoli, says appreciation of luxury apartments in eastern Australian and around the globe has contributed to the growth in interest in the west. 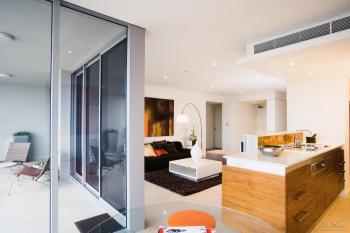 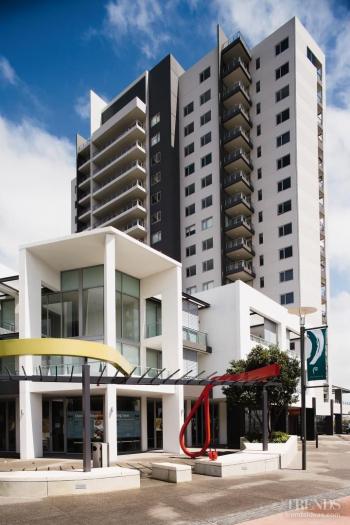 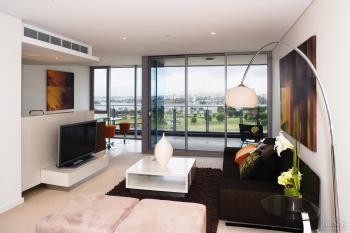 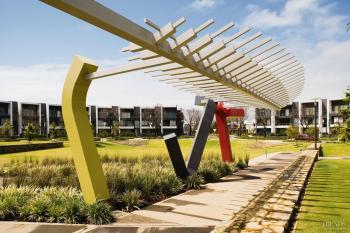 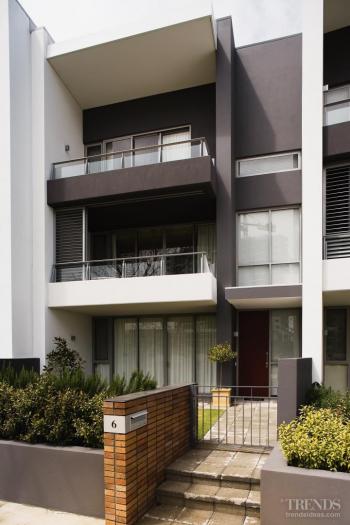 "It has taken five to six years for the phenomenon to gain acceptance in Western Australia," he explains. "A rise in the prosperity of the state, low unemployment and an influx of people from other more apartment-hungry cities are all factors in this strong buyer's market."

The interest in village-style apartment living is also tied into security, he says. This means security in terms of living in a safe environment, away from the inner-city press, and security in terms of appreciating value of their investment. The latter seems to be a self-fulfilling prophecy if Mirvac's plans for additional residences in the complex is anything to go by. Even the reassurance of a comprehensively planned residential environment by a ‘name' developer today seems to contribute to financial future-proofing of the individual apartments.

Location is another key factor in The Peninsula's popularity. The Peninsula overlooks the city without being choked by it; has a railway station within a leisurely five minute stroll; and the international-class Burswood Resort Casino is minutes away, as is an array of hotels, restaurants and retail venues. Then there is the Burswood Park Golf Course, forming a boundary of the development, and a major tennis stadium nearby. A city freeway and airports are also in close proximity and, if all this wasn't enough, the complex also incorporates well-designed access to the slow-flowing Swan River, the trade and communication artery that Perth grew up from.

Conceived and designed by Mirvac's in-house architectural practice HPA, project leader Chris Maher explains how The Peninsula's design responds not only to potential clients, but also to the greater Perth landscape.

"The Peninsula is a visual response to the urban nodes of south Perth and the city's inner-city high-rises across the river," he says. "Developed on a brownfield site, we have sought, through the centrally grouped apartment towers, to create a residential centre that brings additional focus to this side of the river, placing the Swan River back at the heart of the cityscape."

Maher says that in terms of urban-planning, utilising a brownfield site in this setting also made sense because vital infrastructures, such as public transport, are already in place. Building on the outer edge of the city would have been hugely expensive and put additional strain on infrastructures already under siege.

Being close to but stepping back from the city provides for another prized residential luxury – space. This is put to good use throughout The Peninsula, from well-set-out architecture to the generous green spaces in between.

A key motivator in the development of British theories of urban design in the post-war period, Gordon Cullen, wrote that urban design is an "art of relationship that seeks to weave together environmental elements like buildings, trees, landscape and traffic." Mirvac's architectural planners have taken this concept to heart, creating an environment to be lived in, not just resided at.

"Pathways provide easy pedestrian flow through the development and with towers and townhouses rising vertically, Mirvac has designated areas of ground space for parklands and garden 30% in excess of required statutory allocations," says Maher. "Views at every turn, playgrounds, easy river access and the retailers, restaurant/delicatessen and spa all contribute to a communal village atmosphere."

As well as a comprehensive living environment, architectural diversity plays an important part in The Peninsula's popularity. The towers alone offer two-, three-, four-bedroom and penthouse options and, like the townhouses and courtyard houses, are designed to accommodate a variety of occupant scenarios.

Many of the bedrooms in the tower apartments are separated by living spaces. This way a couple might occupy one bedroom and rent another out – an option not available through the lack of privacy afforded by traditionally adjacent apartment bedrooms. The three-level townhouses offer garaging on the ground floor and ancillary spaces alongside. These can be used as a study or additional bedrooms, being set well apart from the main bedrooms on the uppermost levels, and with the living areas separating them on the first floor.

The courtyard apartments offer study spaces over the rear garaging, which can also be used for a satellite granny flat or guest bedroom. The design also means there is often a watchful eye on the rear lanes of the development, a passive form of crime prevention. A human scale is reinforced throughout the development, with the podium apartments and retailers bringing a sense of animation to the towers at street level.

In architectural terms, a commonality of materials draws the diverse living options together. These include a general use of concrete, facing brick, glass, steel and render. Design cues are picked up from the style of residence in question as well. Terraced townhouses underpin their regimented elegance with letter boxes and tones chosen to heighten a dignified appearance.

"Elsewhere, there is a more relaxed choice of materials and textures to heighten the courtyard homes and golf course residences' sense of individuality," says Maher. "This ties back to Gordon Cullen's words regarding weaving together a total architectural space."

Mirvac has created a development that responds to the greater Perth urban landscape and, on closer focus, is equally responsive to the needs of those who walk its pavements day to day.

"The five-star agenda of an upscale, comprehensively planned, residential environment are all addressed in The Peninsula," says Maher. "Security, amenities, privacy, quality of life and value are all in evidence here and the rapid client uptake is a direct reflection of this."