It's often what you can't see at first glance that spells the difference between a stand-out kitchen and an average one.

For this new kitchen, designed by owner-architect Michael Drescher of DKO Architecture, it's a combination of high functionality and the innovative use of materials that set the space apart.

Drescher says he had plenty of time to plan the new kitchen, as he had rented the house for many years, and only recently bought it.

"The original kitchen was very impractical, and tucked away behind a wall," he says. "It wasn't a place you wanted to be in, and it wasn't at all suited to entertaining. My partner and I love to entertain, whether it's friends over for a casual lunch or massive, formal dinners."

Opening up the kitchen to the main living area was the first priority. And aesthetics were just as important as high functionality. 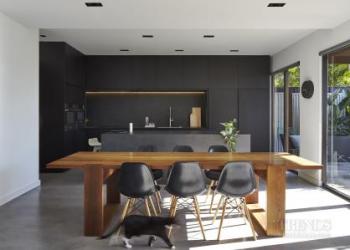 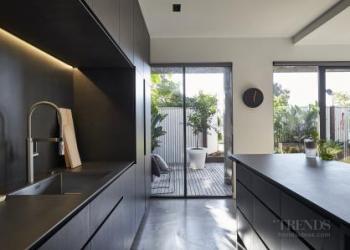 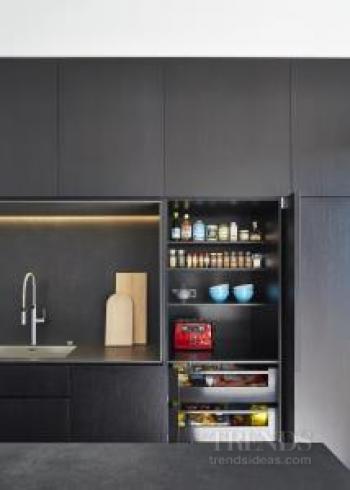 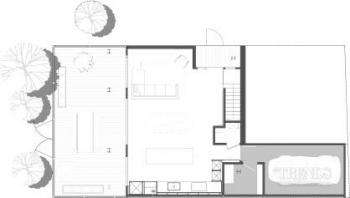 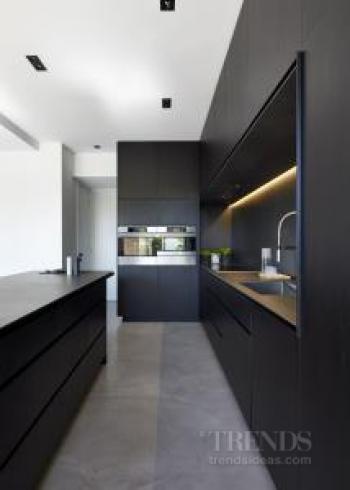 "I conceived the kitchen as a beautiful piece of joinery in the room," Drescher says. "When all the cabinets are closed, it appears very black and monochromatic."

"We also wrapped the porcelain beneath the overhead cabinets above the cooking centre, so the entire niche is in black. The porcelain is very hardwearing – it won't scratch or stain."

Drescher added a strip of LED lighting that shines down on the work surface from the back of the overhead cabinets, providing task lighting.

The perimeter benchtop not only incorporates a flush induction cooktop, but also a massive steel sink that can accommodate large platters and oven trays.

"The tap is of a similar scale to keep it all in proportion," says Drescher. "With the sink at one end, the cooktop at the other and the position of the wall ovens on the side wall, it is possible for three to four people to work in this kitchen at the same time without getting in each other's way."

Social aspects determined other elements of the design as well, notably the position of bar stools at the sides of the island, rather than the front. This avoids having people sitting in rows.

"Guests seated at the dining table can converse with anyone working in the kitchen – the view is not blocked by people sitting on the bar stools," says Drescher.

In keeping with the desire to provide a sleek, uncluttered kitchen, appliances are fully integrated wherever possible. Small appliances are hidden within the pantry, which has a bench and can serve as a breakfast, coffee-making area.

The flooring features latex-impregnated concrete, which is more giving than traditional concrete – items dropped are less likely to break and it's easy to stand on for long periods.