Think of the intricate interiors of the nautilus seashell, then imagine it unfurled into long runs of sectioned elements. This unravelled seaside icon was the inspiration for one of Australia's largest and grandest contemporary homes.

Called Nautilus, the residence was constructed by Sammut Developments and designed by Innovate Architects – together with major input from the owner – with architect Cameron Jones at the helm.

The scale of Nautilus is impressive, says co-owner of Sammut Developments, John Sammut. With a roof area of 3950m2 and sprawled over six stepped levels, the home includes seven bedrooms, parking for 20 cars, a bowling alley, a wine cellar, and a subterranean tunnel that leads to the property's newly built private beach and a restored 123-year-old, two-tier boathouse.

"The house is designed in wings, essentially four self-contained apartments," Cameron Jones says. "The owner wanted a home that felt like a resort so family and friends could come and stay."

Nautilus is designed to nestle within the site, to sit comfortably with its neighbours and not impact the foreshore. From the street, it's hardly seen, screened by extensive landscaped gardens and large trees. There are also two private car tunnels carved out of sandstone leading to the home's two underground garages, while two driveways access visitor parking and the entry. 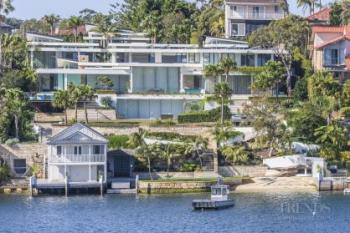 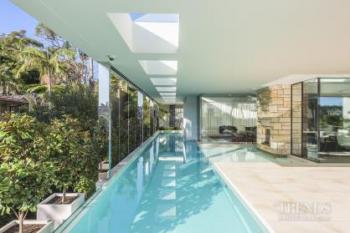 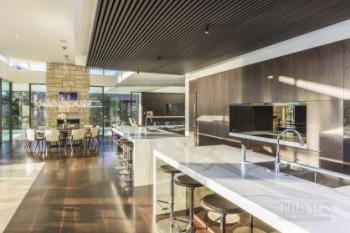 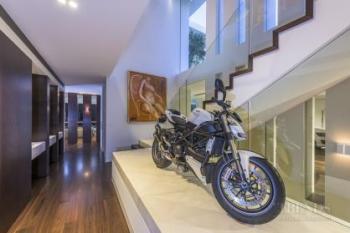 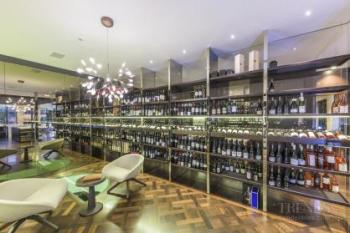 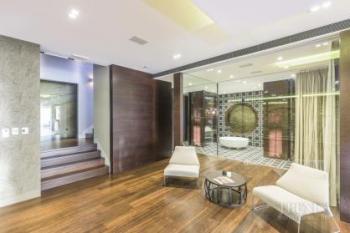 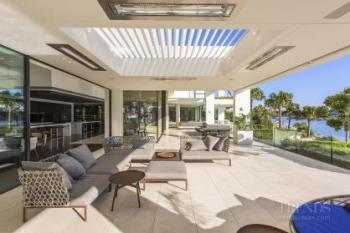 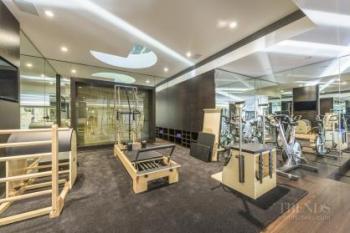 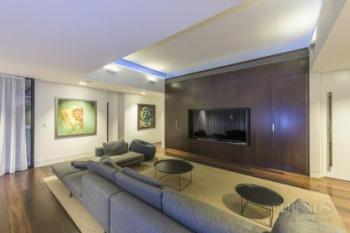 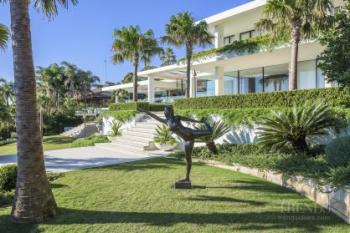 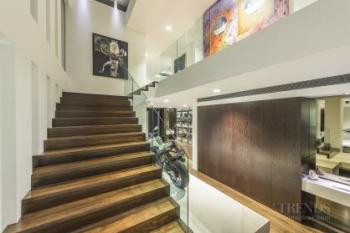 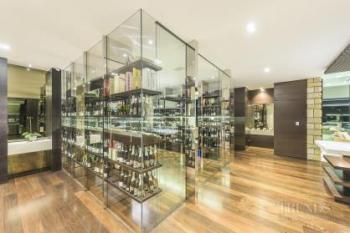 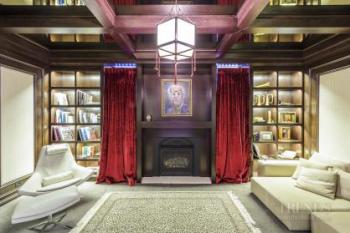 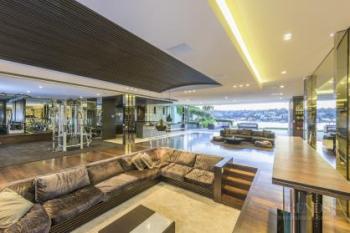 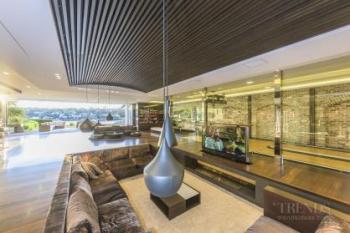 The home spans four blocks of waterfront land and setting it partly into the hill required the excavation of 6500m3 of sandstone, the equivalent to three-and-a-half Olympic pools.

"As well as half of it being essentially underground, the home is constructed almost entirely in slabs of high-strength compressed concrete."

It is testament to the skill of Cameron Jones that the cavernous, semi-subterranean structure blossomed into an inviting, liveable home.

The close collaboration between Innovate, EB Interiors, Sammut and the engineering consultants allowed for the creation of dramatic clear span structures and cantilevers, says Jones.

"This helped break down the residence's monolithic form and allowed the interiors to flow out to the many garden and entertaining areas," the architect says. "The contemporary, linear design is enhanced by the extensive use of natural stonework and feature zinc roofs.

"The owner had many great ideas such as the use of windows looking through the excavated sandstone, which became a highlight throughout. The recurrence of roasted blackbutt timber and limestone, carried across all floors, helps create the resort feel so important to the client."

There are a number of architectural features inside the home. The spiral staircase from the entry to the children's level echoes the Nautilus seashell, with each tread more tightly curved and larger to reflect the golden spiral ratio.

"We also designed a green wall into another staircase to boost air quality and as a feature," says Jones. "There's a wealth of intricate detailing in the custom joinery throughout the house. Our true innovation came in linking each area and level. A strong use of lineal design and materials was needed to bring a project of this scale together and make it feel like a home."

EB Interiors produced a stylistically sleek and refined look, with the choice of finishes bringing softness to the minimalist, linear forms of the architecture. This juxtaposition is taken a step further with the use of reclaimed and recycled building materials in key areas of the home.

"The owner bought hundreds of thousands of reclaimed bricks for the walls of the garage and bowling alley. These were laid with inbuilt arches to replicate an old train tunnel siding. The bricks and the recycled floorboards in the owner's personal garage add another layer of complexity and character to the home.

"As the brief was to create a resort-like destination we had to design many elements not often seen in a home – such as a day spa with steam room, a wine tasting room, a hidden music cave, and a bowling alley," says Jones. "There's also a 25m-long swimming pool. And the intricacy of the design even allows the owner, who has a passion for cars, to drive right up to the kitchen."