A home surrounded by native forest vistas can have a calming and peaceful atmosphere. Yet a remote location is not always necessary for an urban sanctuary. With a carefully considered design, maximum privacy can be obtained from a partially wooded site.

Richard Middleton, from Novak & Middleton Architects, describes this home's site as deceptive. While there are houses in this suburban neighborhood, they are not immediately obvious from this elevated site. Designing the house, Middleton orientated it to maximize views of a nearby park and the hills beyond.

"The site had strong topographical elements. It's situated on a knoll, with only one close neighbor. Essentially, we were able to turn our back on other houses, and open up the facade in two directions. The upstairs box-shaped wing faces the park while the other facade looks out over a valley."

Working with the clients, Middleton's concept was for a low, linear, extensively glazed structure running east to west.

"The site had a huge potential for solar gain. Deep reveals and fins are used to protect the building from the sun, while maximizing views." 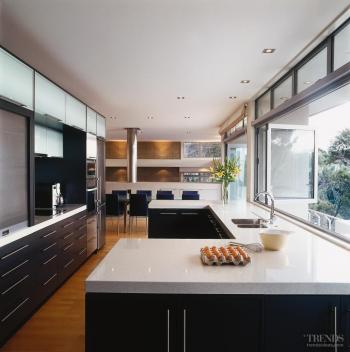 The strong horizontal form incorporates other key design elements. Solid forms are juxtaposed with void spaces and clear definitions between public and private spaces were created. Different techniques were used to break up open spaces without using walls.

The house exterior has plaster siding, creating a look of solidity to balance the transparency of the glazing.

"The box-shaped wing on top, which houses accommodation areas, was designed as an iconic element to contrast with the lower living area," says the architect.

The underside of this box has profiled aluminum siding and features a sheltered deck. It is also detailed with rich colored wood, designed to link with the lower decks. All solid elements go to ground, says Middleton, while the decks float above the landscape. In time, when the surrounding foliage grows, the lower deck supports will be hidden.

The open-plan interior living spaces are centered around the kitchen.

"The kitchen was designed as the hub of the house, an area that is an interface for all the public spaces. Everything hinges around the kitchen, which is a generous space where two people can work."

The open-plan living space runs the complete length of the house, from the living room at one end, through the kitchen to another living space at the other end. This long space is mirrored outside by decking along the full expanse of the facade.

Middleton says a challenge was defining the interior spaces within the open-plan layout, without resorting to the use of walls.

"A lowered floor was created in the living room," he says. "Rather than changing the ceiling height, we decided to float the horizontal plane roof and change the floor. The fireplace surround forms a half-height divide, separating this room from the dining area and kitchen."

To create a sense of proportion between the high ceiling of the living area and the exterior deck areas, Middleton incorporated a horizontal band, which interrupts the glazing and provides a step down from the high ceiling, easing the transition to the exterior. This band also protrudes into the living room, housing downlighting.

Recessed lighting throughout allows ambiance and moods to be adapted.

The private accommodation wing of the house is separated from the living areas by split-level stairs.

"The bedrooms were designed to form a retreat from the communal areas. Orientated towards the park, they have a close connection with the outdoors," the architect says.