Stainless steel bands bind the crisp cabinetry in this new kitchen, bringing a bold, contemporary edge to an older bungalow

A major home renovation can provide plenty of scope for creativity, especially when space is not an issue.

For the owners of this older bungalow, which was extended up and out, the remodeling created room for a new kitchen within a spacious family area.

Designers Melanie Craig and Stacey Anderson of Melanie Craig Design say the owners love to entertain and wanted something modern and a little different.

"They wanted a kitchen that spoke design, rather than a standard kitchen in the corner of the room," Craig says. "They were happy to let us explore various options and materials. The extension incorporates exposed structural steel elements, which prompted the decision to go for a slightly industrial look.

"The starting point for the design was the 2in compressed stainless steel material, which we have used in several projects. Here, we decided to wrap it around the end of the cabinets, rather like a giant elastic band. At one stage we even considered using bands of yellow rubber, but then chose to introduce color through bright lemon accessories that can be changed out if required in the future." 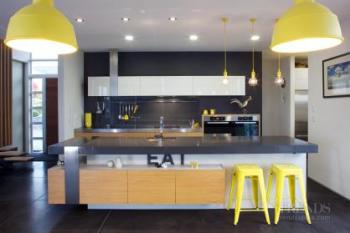 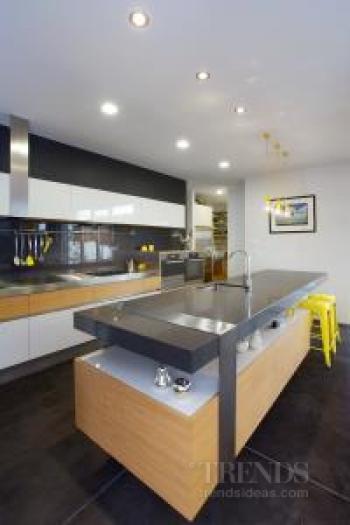 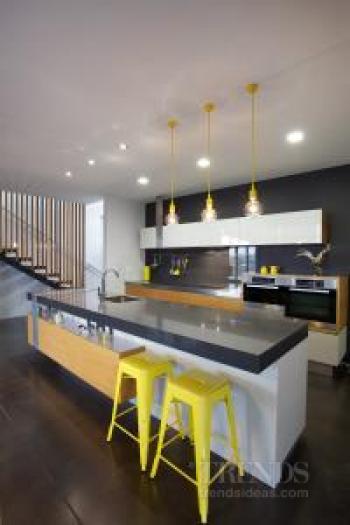 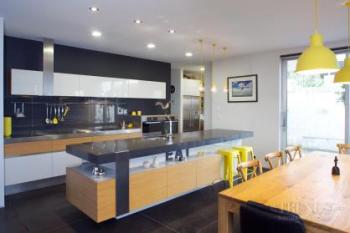 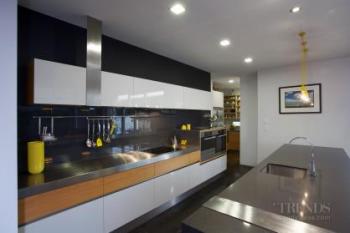 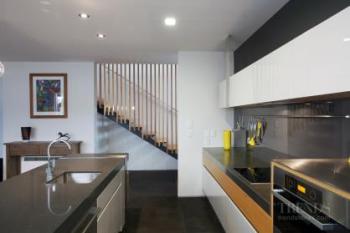 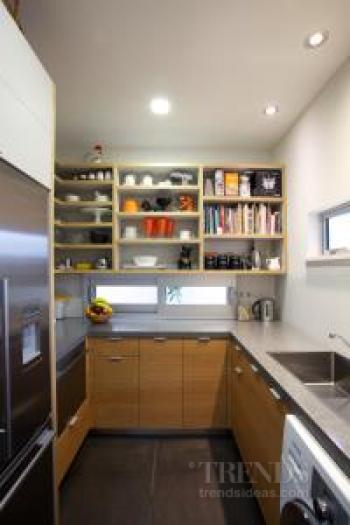 A dark-toned quartz island countertop and concrete flooring reinforce the industrial look, but these elements are offset by light American oak cabinets and smooth white lacquer.

"The wood warms the space visually," says the designer. "It gives the kitchen personality, and helps to ensure it interacts with the wider living area and is not too hard or clinical."

As well as the asymmetry created by the banded ends of the cabinets, there is a change in levels on the rear countertop.

"Rather than having a tall oven tower like a standing soldier, we prefer to elevate ovens side-by-side at waist height – like a traditional tallboy," says Craig. "This makes the ovens much more accessible, and creates a place on top for hot dishes to rest, which keeps the cooking zone free."

The designers say the kitchen is divided into a number of zones.

"We like to work with a working star rather than the traditional work triangle," says Craig. "There are separate zones for food preparation, cooking, cleaning and storage. Everything is right where it is needed, and drawers are customized for cutlery, utensils, oils and spices."

The design team placed the refrigerator near the door in the scullery, where it can be accessed by the family without entering the main kitchen.

The scullery itself is large enough to be a separate food prep and cleanup area, making it easy for several people to work.