This dramatic exploration hub is by Urlich Architects

Cross-curricular collaboration often sparks innovation. However, even in the spirit of discovery, scientists and engineers with similar goals can still be so locked into their screens and individual projects that their thought patterns seldom meet. Until now, that is. The Arizona State University Interdisciplinary Science and Technology Building 4 (ISTB4) sets up an environment where such sharing of ideas is fostered and celebrated.

The design for housing key programmes from both the School of Earth and Space Exploration and the Ira A Fulton School of Engineering clearly delineates the research, science and education programmes it contains, says design principal Steven Ehrlich.

"The seven-storey, plus full basement, 27,871m2 LEED Gold structure consists of a block of offices on the north and west sides of the building, while research laboratories form an L-shape on the east and south sides. At ground level, the entrance admits visitors to a two-storey public education outreach gallery and multiple classrooms, a 250 seat auditorium/planetarium, and large outdoor arcades looking into exhibit spaces."

Exterior materials reflect the ISTB's organisation, represent essences of its purpose and connect to local architecture. Vertical mechanical shafts carry services to the laboratory block and the massive mechanical penthouse is wrapped in a rich hue of locally sourced red brick that relates to the surrounding campus buildings. Exit stairs are clad in channel glass, forming another architectural feature. The auditorium form is expressed on the outside as twisting facades of brick, reminiscent of sedimentary desert geology.

"The design of the building envelope and material selection were carefully studied to achieve the highest level of energy efficiency, sustainability and value," says Ehrlich Architects project manager Mathew Chaney. 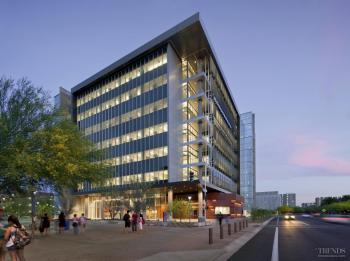 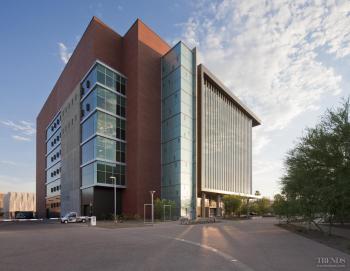 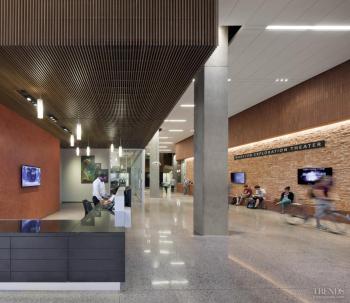 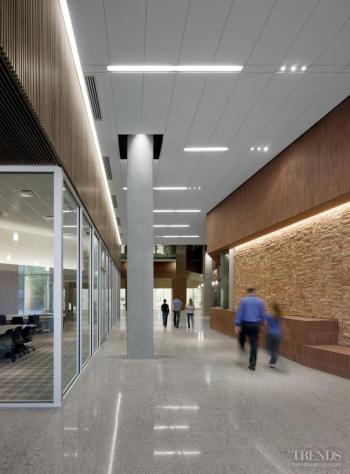 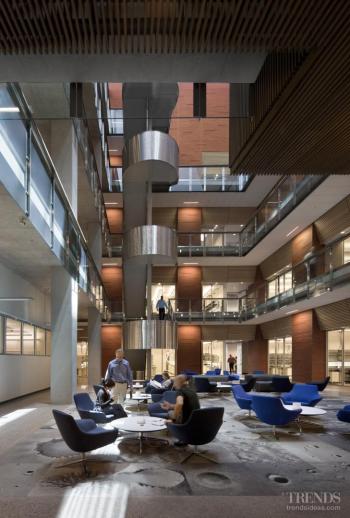 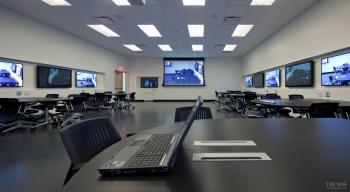 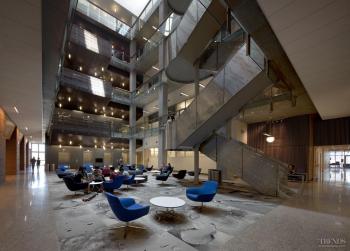 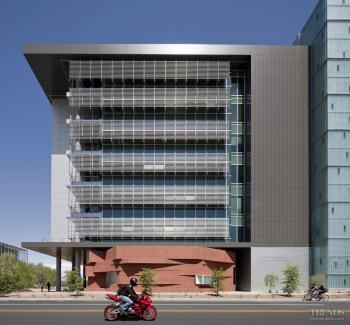 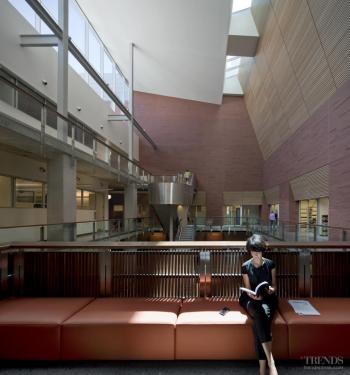 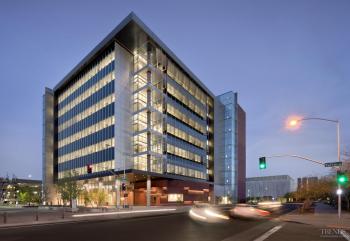 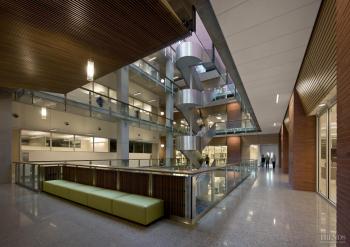 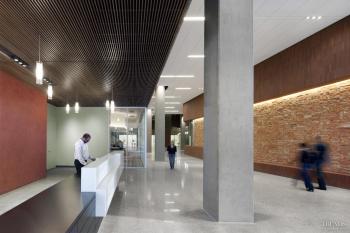 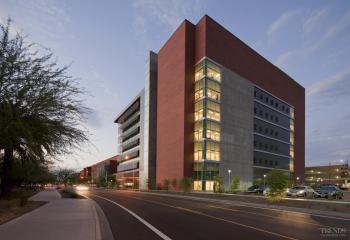 Above the public floors, the dynamic shifts. Research labs and offices on levels three through seven, secured and closed to the public, are linked by a giant internal atrium. Effectively a vessel of light, this connects the floors visually, psychologically and physically, with sculptural open stairways leading the eye up through the void and various open, casual meeting spaces, called ‘living rooms in the sky'. Many of these are set near the banks of elevators, announced by slatted wood soffits.

"A paramount design goal for us was to foster collaboration between scientists and engineers conducting research projects. The atrium serves as a mixing bowl, facilitating chance encounters," says Ehrlich.

This space provides a sense of purpose and stimulation in other ways, too. The stainless steel balustrading on the stairs has symbology published by the US Geological Survey laser-cut into it. Even the act of climbing the stairs and looking into the glass-fronted labs and offices is a reminder of a greater, common purpose.

"Another visual prompt comes from the carpet design, which is comprised of photos of craters taken by ASU-controlled cameras from across the solar system," Ehrlich says.

The top of the atrium culminates in canted wood planes and skylights that flood light down through the volume. Essentially, ISTB's faceted upper reaches of canted wood slats creatively integrate and screen the atrium's smoke evacuation system.

"The exterior expressed forms represent the clarity of the building's purpose, which in conjunction with the atriums, resembles a large machine," says Ehrlich. "The result is an interdisciplinary facility where the overall functions of exploration, collaboration, research and education are nurtured and embraced."