Photography by Iwan Baan and Shu He

Commercial tower blocks and mixed-use developments are typically clustered to arise from a street-level podium. With built forms abutting the street, such architecture can appear intimidating.

A new development in Chengdu, China revisits the whole concept of a multi-tower, mixed-use development to create a sustainable, light-filled urban precinct that enhances the architectural interface with the city.

Raffles City Chengdu, commonly referred to as Sliced Porosity Block, was developed by CapitaLand China and designed by Steven Holl Architects. The 310,000m2 development covers an entire city block, providing two office towers, a residential tower, a hotel tower, a high-end serviced residences tower and retail premises around the perimeter and beneath a large plaza.

But it is the position of the towers, their design and their relationship to one another, that heralds the key difference. The towers are wrapped around three sides of a landscaped precinct, with street level access at all points where there is a break in the built form. 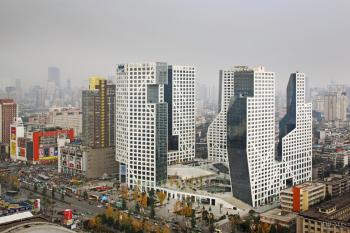 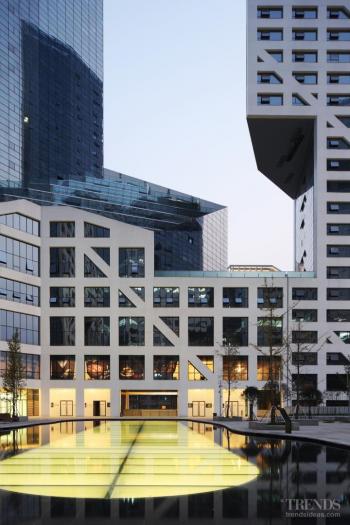 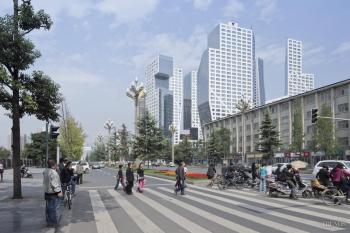 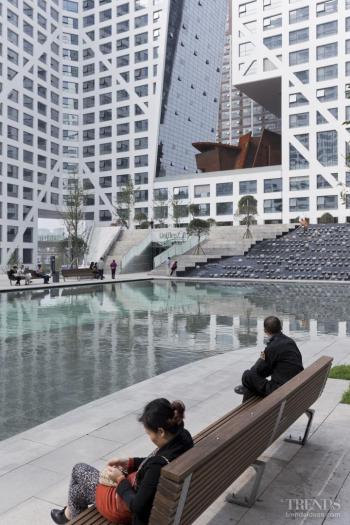 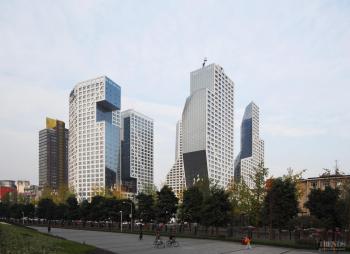 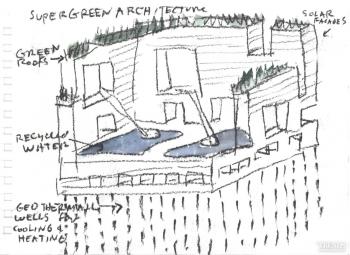 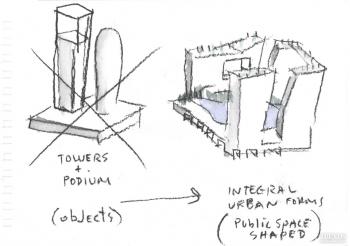 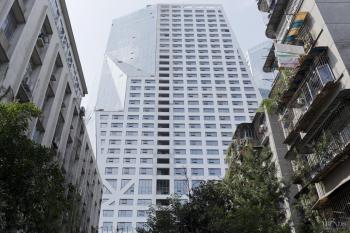 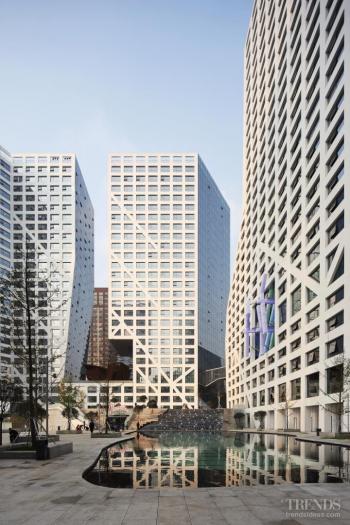 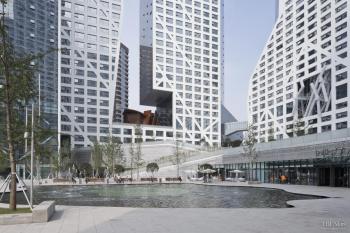 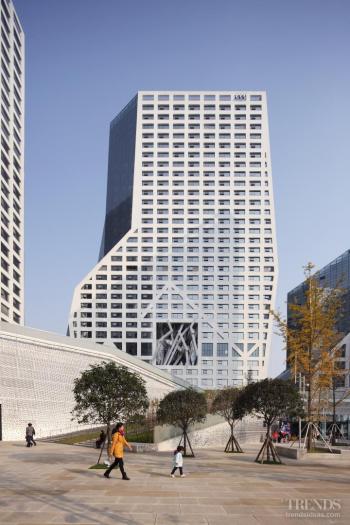 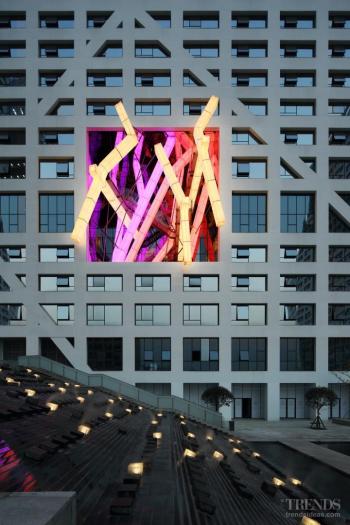 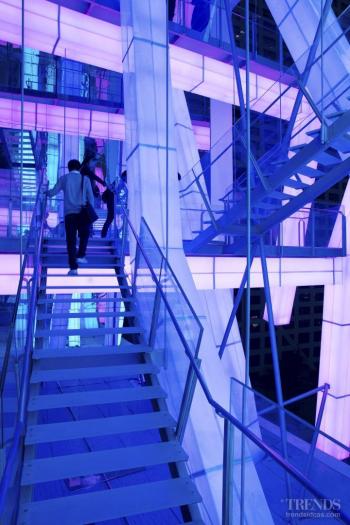 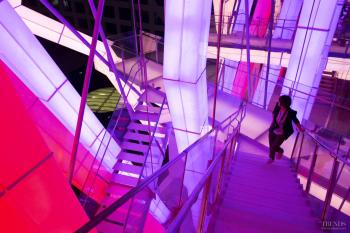 "Porosity was one of these – the idea that the buildings would be designed to allow sunlight to penetrate the architectural mass," Bannura says. "This explains the setbacks, cantilevers and angled facades. These were calculated after consideration of the site's precise longitude, latitude and sunlight angles, and the location of neighbouring residential communities. We introduced glazed walls to all these elevations, so you can read where the sun slices through the towers – those are the glazed facades. The buildings are also distinguished by their exoskeletal structure – the architectural geometry and load-bearing diagonals are clearly visible on the exterior of the towers."

Another key design concept was the integration of the urban space in terms of both its function and the form.

"We designed a large plaza that would integrate the buildings and fulfil all the expectations people have of such an urban precinct, essentially creating a city within a city, not unlike the Rockefeller Center in New York," says Bannura. "Micro-urbanism was a key concept expanded in the design. Creating a strong sense of community and introducing an intimate scale to the development was vital. There are no intimidating structures at pedestrian level – everything is open and easily accessed, from the double-fronted retail stores around the perimeter to the building entries."

The design of the plaza references the work of the Chinese poet Du Fu, who lived in Chengdu during the 8th century – this was another key concept that influenced the design.

"Providing a sense of history and a recognition of the past was important," says Bannura. "The design is an interpretation of a poem that reads ‘This fugitive between earth and sky, from the northeast storm-tossed to the southwest, time has left stranded in three valleys'. We have created three linked plazas that reference the three valleys, each with a water feature inspired by a different concept of time. In the Cascades water feature, for example, every stone block refers to a day of the year and there are 24 special markers that follow the Chinese calendar."

Spatial mall geometry was another defining architectural influence. Bannura says it was vital that shoppers in the mall below the plaza would still feel connected to what was happening above. The design consequently provides three extra-large skylights – one in each of the three lakes. By day natural light floods into the mall, and at night, the light shines in reverse, illuminating the lakes.

The architects also introduced three pavilion elements that sit within three towers around the level of the fifth floor. The towers appear to wrap around these pavilions giving the impression these elements were already in existence. One pavilion, in rusted Corten steel, will exhibit digital projections of Sichuan historical artefacts – an acknowledgement of the museum that once stood on the site.

The Light Pavilion, designed by Lebbeus Woods and Christoph A Kumpusch, is a complex space that explores futuristic architectural lighting forms. An open stairway winds up through the pavilion. Here also, the design acknowledges the historical heritage of the city, with bright light displays celebrating traditional festivals.

"Throughout the development, the lighting plays a huge role," says Bannura. "At night, light leaks from the sliced cuts in the reverse direction of the sun slicing through the buildings. And the plaza itself has an inviting glow – light spills out and activates the streetscape on South Renmin Road, a key axis through the city."

The sustainability initiatives were another key driver for the design of the project. The development has set a new benchmark for the city, being the first complex project in Chengdu to obtain LEED Gold Pre-Certification status, which was awarded by the US Green Building Council.

Sliced Porosity Block incorporates advanced green technologies. These include a ground-source heat pump system featuring 468 geothermal wells, and a heat recovery system whereby heat from HVAC condensate is transferred to flushing water. Rainwater is collected via a raised paver system that controls water runoff – the water is used for irrigation. In addition there is greywater recycling. Altogether the water savings result in a 43.4% reduction in potable water usage. The development also has green roofs, LED lighting and occupancy sensors, recycled and locally sourced materials, and a chilled water storage system that reduces electricity demand during the day. Passive design plays a key role as well – the thermal mass of the exposed concrete stores passive heat; the cradle of towers provides a microclimate that enhances the outdoor living environment in summer and winter; and exposure to daylight helps reduce energy use.