It is a tried-and-true interior design approach to introduce a single statement piece that lifts the aesthetics of the entire room. Applying this logic in a bathroom project, there is one feature that can always be expected to lead the design.

This long, narrow bathroom forms part of a new master suite on the second floor, which is an extension to an earlier add-on to the house. Created by designer Debra DeLorenzo, the bathroom has a large, oval marble bathtub set at a commanding vantage point at the end of the room. The stone bath was so heavy that the architect had to be consulted about the best way to lift it into position, says DeLorenzo.

"We had to crane the tub in before the roof was built – it was so heavy that we had to keep it suspended from a roof joist until the formwork and tiling could be prepared for the bath to be lowered onto.

"The bathtub is positioned so the bather can take in views of the ocean. A corner ledge was introduced because freestanding baths often suffer from a lack of places to put things such as soap or a glass of wine."

Other curved elements in the design include separate his-and-hers vanities – one round, one oval. These are positioned in separate areas of the bathroom, giving the two owners a degree of privacy within the elongated, open-plan space. 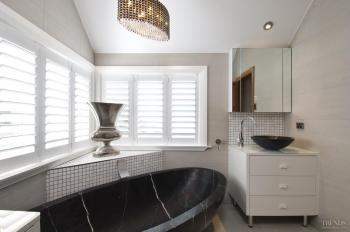 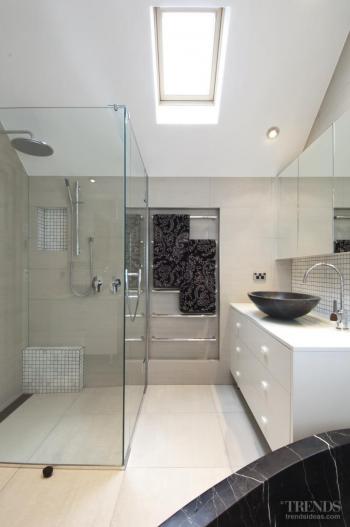 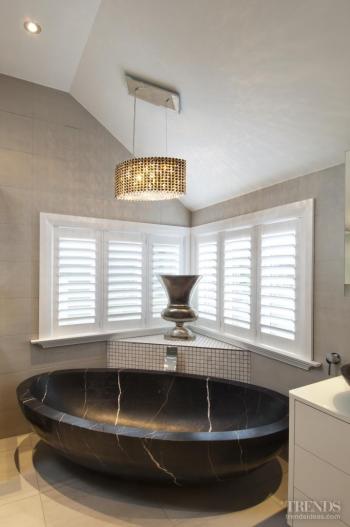 "I specified a frameless glass shower stall to enhance the feeling of space and to maximise light flow through the bathroom. A large recessed towel rack on the rear wall combines utility with a dramatic presence.

"The distinctive black hues of the bathtub also impact on the decor," says DeLorenzo. "To play up this tonal accent, I chose a chandelier comprised of black crystals to hang directly above it."