Shape of things to come

From its environmentally sustainable design to its interactive layout, this new building provides a blueprint for the workplace of the future

Shape of things to come Discover this article's resources 0

With the scarcity of inner-city building sites in large cities, many new commercial projects involve the adaptive reuse of an old building, or are built on a site that has a historical significance.

The Bond precinct in Millers Point, Sydney is no exception. And it's probably appropriate that the development, built on the site of a former gasworks, includes Australia's most energy-efficient office building.

Owned by Deutsche Office Trust, 30 The Bond is part of the historic precinct that also encompasses three heritage buildings and a plaza. It is also a building that is setting new standards for environmental design. Conceived and developed by Lend Lease as its new Sydney head office, 30 The Bond is the first office building in Australia to receive a five-star greenhouse rating under the government-sponsored Australian Building Greenhouse Rating (ABGR) scheme.

Lend Lease project manager Michael Wheatley says that right from the outset the company made a commitment to endorse ecologically sustainable development (ESD) principles. Following a series of employee workshops, key environmental aspirations were determined. A reduction in greenhouse gases and a high-quality indoor environment were considered the most important factors.

"Other design directions that reflected the company's identity and helped shape the project also evolved from these workshops," says Wheatley. "These included a desire for innovation, the need for a transparent office environment that would reflect the company's open and consultative way of doing business, and the need for a design that acknowledged the heritage and community aspects of the site." 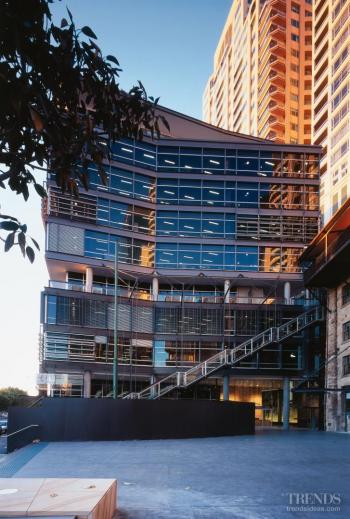 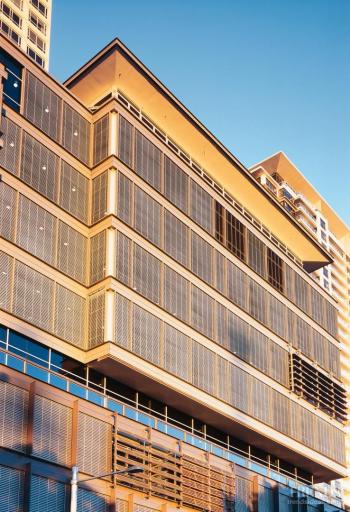 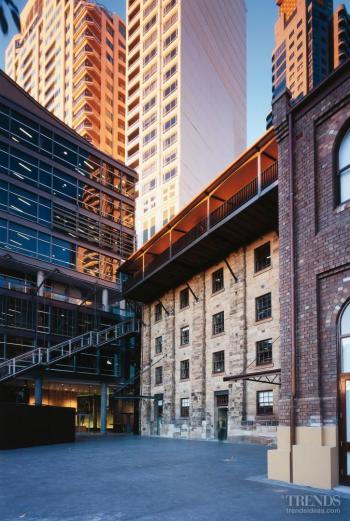 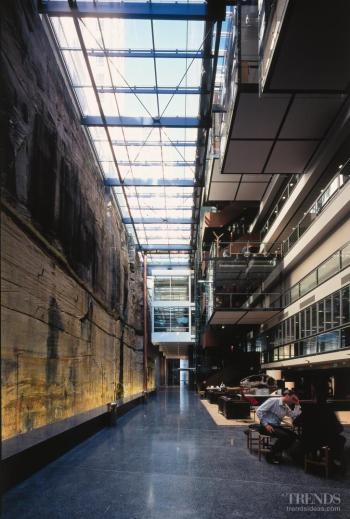 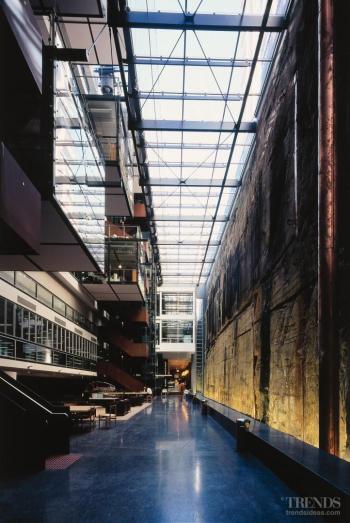 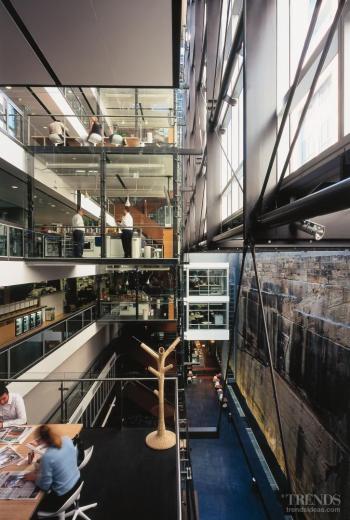 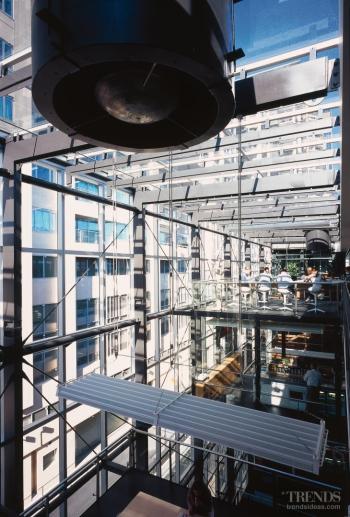 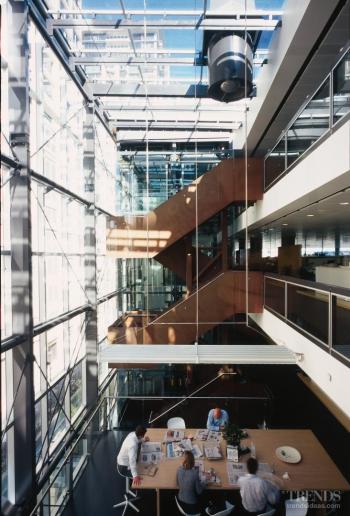 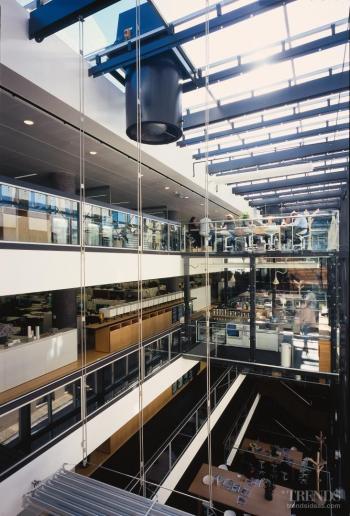 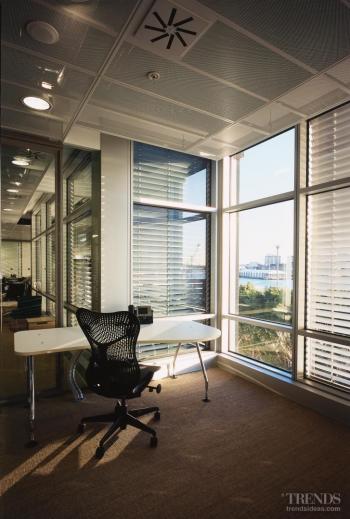 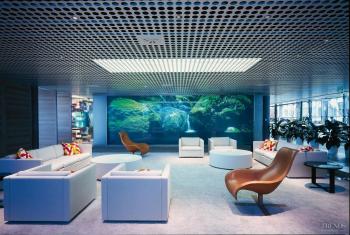 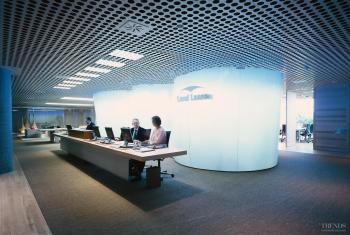 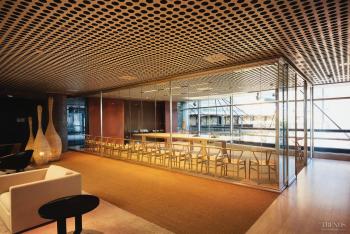 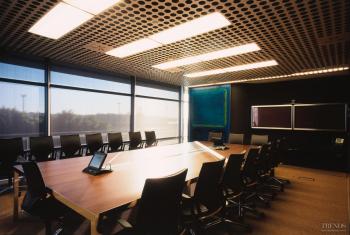 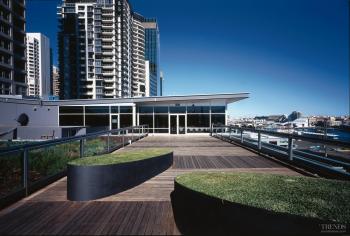 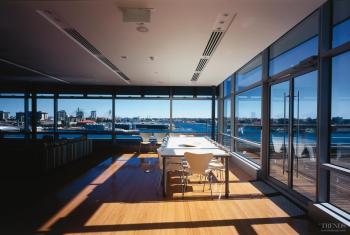 Concept architects Lend Lease Design worked with collaborating architects PTW, and heritage specialists from Tanner Architects to design the nine-storey building of approximately 31,800m2. The building includes a vast, eight-storey atrium and 100m-long floor plates. And despite the long west-facing façade and extensive use of glazing, there isn't a conventional air-conditioning unit in sight.

The impact of the afternoon sun and thus the air-conditioning load is minimised by operable shading systems on the western façade. At the same time, these customised louvre systems maximise the harbour views.

Wheatley says the system is similar to an external venetian blind, which deploys progressively during the day as the sun moves to the west. In addition, occupants can control the tilt of their blinds to suit. This makes the exterior a living façade that constantly moves, changes and adjusts, providing maximum flexibility and protection. The system is also employed on the shorter northern and southern façades.

In keeping with the historic setting of the building – it is also the site of the former bond stores next to the wharves, hence its name – the façade louvres are made from a variety of materials. These include recycled timber from the Walsh Bay wharves, green copper and Corten steel, which rusts to resemble the steel of the old dockyards.

Environmental measures are also much in evidence inside the building, says Wheatley. A passive chilled beam air-conditioning system reduces energy consumption by around 20-30% and provides a very comfortable working environment.

Wheatley says 30 The Bond is the first large-scale commercial building in Australia to feature the chilled beam system, which also contributes towards a CO2 emission that is 30% lower than a typical office building.

Architect Noel Samyia of PTW says the use of chilled beams also reduces the quantum of traditional ducting needed, helping to keep the building within rigid height limitations.

"Designing the building within the three-dimensional envelope that was available was a major challenge," he says. "The chilled beam system meant we were able to trim 100mm off each floor."

Noel Samyia says keeping humidity to a minimum was another challenge, particularly as the building abuts a large, hand-hewn sandstone wall – a cliff that was part of the original gasworks site.

"This rock wall in the atrium is frequently wet, particularly when it rains. To overcome this problem, there is a drain beneath a seat that runs along the bottom of the wall. This structure also contains an air extraction system, which sucks away the cold, moist air that sinks to the bottom of the atrium. This air, in turn, is used to supplement the air supply to the carpark."

For many visitors to 30 The Bond, the light-filled atrium on the ground level is the main entrance – there is also another entrance from a different street on a higher level. But, it is the atrium on the east side of the building that best showcases Lend Lease's interactive work environment.

Michael Wheatley says the main challenge of the design was to create an active atrium, rather than a simple void.

"Light wells can be quite lifeless," he says. "We wanted to fill it up with people and lots of activity and energy. The atrium had to be the vibrant heart of the building, and a place where visitors could see who we are and what we are about."

To achieve this, a series of pods are cantilevered from open floor plates at different levels. These pods provide meeting spaces and breakout rooms, so people are constantly moving through these areas. Glass lifts at either end of the building and open stairways also create movement.

"It was important to provide a sense of connection, both horizontally and vertically," says Wheatley. "All the floors open to the atrium which further enhances the interaction."

As well as the cantilevered pods, there are meeting rooms and breakout areas along the western façade. A line of columns about 3m back from these windows creates a sense of transition – almost like moving onto a veranda.

Noel Samyia says the open floors necessitated innovative fire engineering, which in turn resulted in wide passages to allow people to exit quickly. These spaces enhance the openness of the building.

"This requirement reflects the company's egalitarian approach to its work, and the emphasis placed on creating a team environment," he says. "There are no offices – everyone from the chairman down sits at an open workstation. There are also no more than four people grouped together, although there is flexibility to reconfigure into larger groups for a team project. "

Hadenham says the reception area promotes this culture. A single, shared reception bench reinforces the idea of a friendly environment.

"It also conveys a sense of openness about Lend Lease and the way the company operates."

The furniture in the reception area also promotes a relaxed, family feel, Hadenham says. The palette of materials was chosen to reflect the company's green philosophy. Grass matting, recycled rubber products and the use of plantation timbers are much in evidence.

However, sophisticated elements are also part of the look. A large, rolled glass structure, modelled on a classic Aalto vase, makes a dramatic visual statement. This structure conceals service rooms, but its luminosity creates a transparency that prevents it from looking too bulky.

A perforated ceiling is another strong feature in the reception area. This was designed to highlight the chilled beam cooling system, which is fundamental to the building design and not something that needs to be concealed or hidden, says Hadenham.

"The perforated holes, which are a larger version of the ceilings elsewhere in the building, also create a sense of drama."

Hadenham says the casual and relaxed atmosphere of the general office areas belies a rigidly planned layout. Filing and storage systems are positioned along specific grids that follow the lines of the floorplate.