Suites at this mountain lodge are designed to capture the great views, while still providing privacy for guests. The lodge is the winner of the Commercial Design Trends hospitality award

Architecture should complement or enhance a spectacular view, rather than compete with it. That's the philosophy behind the design of many luxury lodges, and the project featured here is no exception.

Architect John Blair was commissioned to design Azur, a boutique lodge on a picturesque site high above Lake Wakatipu near Queenstown. The project involved the renovation of an existing house and the design of a collection of stand-alone villas or suites.

Azur part-owner Anthony Ross says the owners wanted the lodge to have a modern New Zealand look, with indigenous materials and a design that highlighted the magnificent views.

"We wanted to bring the outside into the villas, so the guests can feel like they are part of the scenery," he says. "But, at the same time, we wanted the interiors to depart a little from the prevalent alpine look. Introducing some subtle Asian touches was a way to create something different and a little more exotic."

The existing house was transformed into a lodge with function rooms, a library and a lounge. In keeping with the local vernacular, building materials include cedar and local schist. 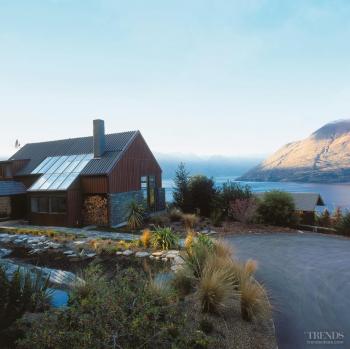 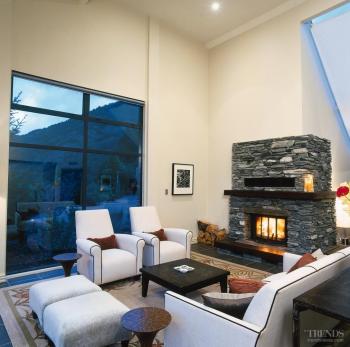 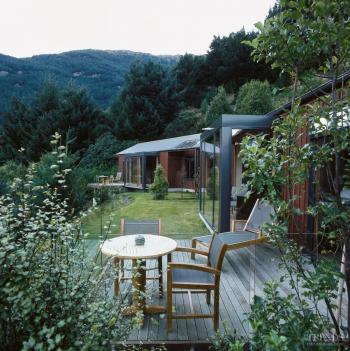 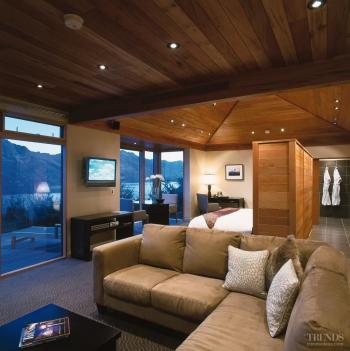 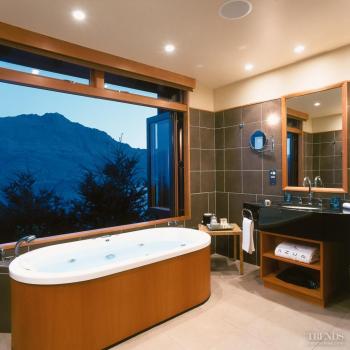 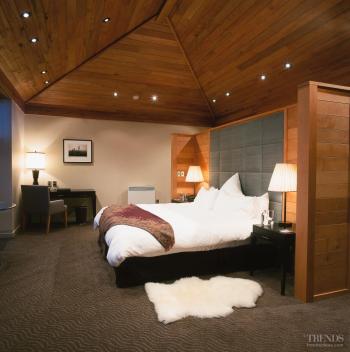 The stand-alone villas were also built from cedar, and are positioned at different levels on natural terraces.

"It made sense to use the existing contours of the land," says Blair. "As well as designing the suites to get the best views, each villa is also positioned to maintain individual privacy. By placing them so they are slightly offset, each suite has a different aspect."

Extended roof gables exaggerate the sheltering character of the villas, further enhancing the sense of retreat.

Blair says the suites were designed to provide a natural, spare aesthetic – in contrast to the mountain views. Indigenous materials, including South Island silver beech ceilings, reinforce this look.

"The ceiling above the bed, which is always the focus of a suite, forms an inverted pyramid. This helps enclose the bed space and creates a sense of place," says Blair. "A wood screen helps separate the bed from the entrance and also encourages a sense of exploration – it creates a little mystery."

Each villa has a large bay window that projects out over the view, and a deck, which forms an extension of the living area. Large, bifold windows in the bathroom also ensure the view can be enjoyed from the bath.

Interior designer Su Seam Teo of LTW Designworks says the furnishings throughout the lodge were chosen to impart an international look.

"The owners' years of experience in Asia is reflected in their preference for furnishings that are not predictably alpine New Zealand," she says. "But the Asian influence is subtle. It is evident in little touches, such as the accessories, which include Jim Thompson silk cushions."

Teo says the furnishings also take their cue from the natural surroundings.

"There are a lot of earthy greens and blues, so we have added fire colours to bring additional warmth, with orange- and rust-coloured cushions and throws."

Texture also plays a significant role in the interior design. Sofas in both the lodge and suites feature cotton chenille, which contrasts the smooth silk cushions. The custom-woven wool carpet has a ripple pattern that is reminiscent of the lake.

"A lot of consideration has been given to the elements you can touch and feel," says Teo.

Contemporary-style furniture with some classical lines was specified for both the lodge and the suites.

"The important element here was the view. We didn't want the furnishings to compete with this," she says.

However, attention to detail is significant. The padded silk bedhead, for example, is anchored by small paua shell buttons. And the small tables in the suites, made from Balinese coconut wood, feature coconut shell inlays.

The bathroom continues the spare, contemporary feel, with the extensive use of South Island silver beech veneer.