One trick of effective interior design is to turn a potential negative into a standout positive. When pushed for space, for example, shaping an element to optimize efficiency can create a surprising, dramatic feature.

This kitchen forms part of a home built in the 1940s and revamped in the 1980s. That remodel had its own shortcomings and this refit, by designer Royston Wilson, has addressed these.

"Initially the kitchen was in a wide U shape and doubled as a through space from the rear entrance to the family room. The layout resulted in constant interruptions when people were cooking and required a lot of traversing to reach the various work areas."

In this remodel, the entrance was moved away from the kitchen, avoiding the need for people to traipse through it. The relocation meant the workspace could be reconsidered along more practical lines.

"At first we considered a curved peninsula island but the need to access appliances – two large refrigerators in particular – required a more open layout," says Wilson. "Having thought about accessibility, the remaining space led us to a wedge-shaped configuration, and the feature was born." 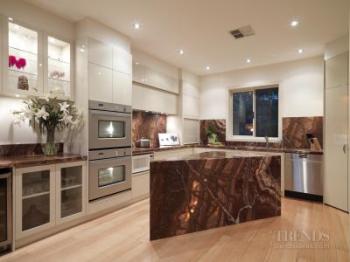 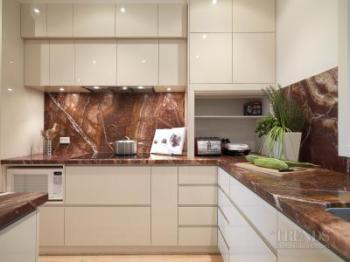 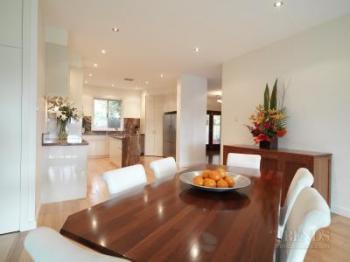 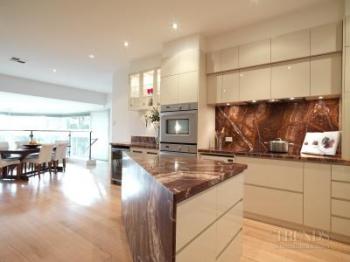 The kitchen now looks more spacious, with an improved connection to the adjacent room and more tightly grouped work triangles.

In addition, the clients wanted the new space to reflect their love of stone – hence the prominent use of onyx. The cabinets are in neutral tones to allow the Volcano onyx to take center stage.

"We also introduced zones of use, with the kitchen proper finishing at the tower of ovens, and the entertaining area set beyond, closer to the living area," says Wilson.