Series of bathrooms with feature copper and marble look surfaces

Luxurious materials and bathrooms are not always a good match in terms of practicality – take marble and copper, for example. In a wet environment, both are susceptible to staining and water damage. It's interesting, therefore, that the designer of these three bathrooms, in a renovated and modernised villa, decided to make these two delicate materials the heroes.

Designer and developer Cameron Ireland has always pushed the boundaries when it comes to the homes he designs.

"In a competitive market, the new and the different will always stand out, and I'm always looking to use products and materials in creative ways," Ireland says.

In the case of this five-bedroom home, he opted for three bathrooms – a large family bathroom, complete with bathtub, plus two smaller bathrooms, one of which is an ensuite – and themed them all around marble and copper.

"I think it's important to visually connect bathrooms in the same house," he says. "Here, I chose a very limited material palette – marble for its luxury, and the copper to link through to the retro-style Tom Dixon pendants we'd specified in the kitchen and dining room." 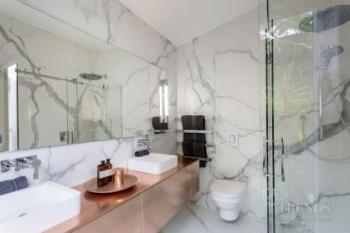 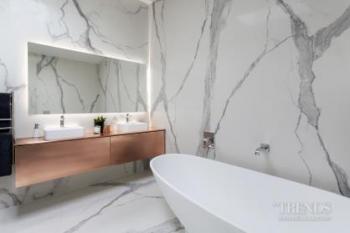 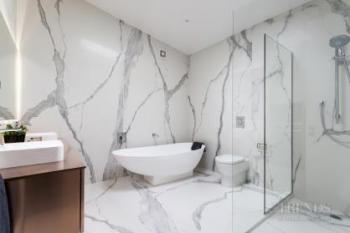 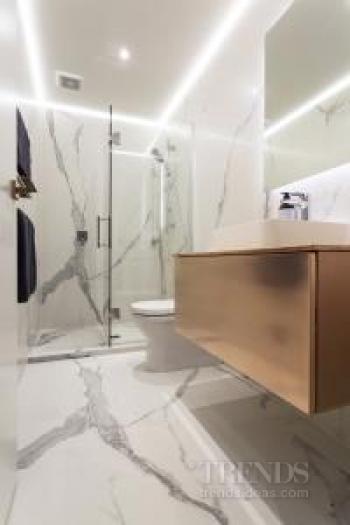 Genuine marble was not an option because of its porosity, but Ireland wanted as realistic an effect as possible. He also wanted to get away from the tiled effect.

"I discovered this fantastic thin porcelain slab, imported from Italy that comes in large 1.6m by 3.2m sheets. It was the perfect solution – giving me the look of marble, without the downsides."

Reproducing the natural, random veining that makes marble such an interesting material to look at has always been difficult. The patterns on these panels are about as authentic as you can expect to achieve from a man-made product. They come in three different designs that can be book-matched or used randomly.

"With these bathrooms, we had to plan which sheet went where in advance, so that there were no double-ups, to make the pattern look as natural as possible," says the designer.

The copper, wall-hung vanities provided the second distinctive element in the rooms. Ireland knew what he wanted to achieve for the look, but there was nothing suitable on the market.

"They had to be from scratch. We took thin sheets of copper and moulded them around the cabinet carcasses and drawer fronts," he says. "To prevent the copper from oxidising and staining, we then coated it in several layers of protective lacquer."

Because Ireland had never worked with this finish before, it took several attempts to get the right balance between retaining the natural look of the copper and providing a sufficient barrier between it and potentially damaging moisture.

"The minimalist fixtures chosen for the three rooms avoid distracting from the hero elements. Even the mirrors and glass showers are frame-less, helping them recede visually," Ireland says.