Architecture has always been about people, but in earlier decades it often seemed as though the human factor was relegated to a low priority when it came to the development of commercial buildings and tower blocks.

All that is changing rapidly, as architects, local councils and developers take a more holistic approach to new developments. The physical, visual and emotional impact of a new building is now influencing the design to a much greater level than ever before.

The new Circa CT1 office building in Nundah, Queensland, reflects this changing focus. Brisbane architecture and interior design firm Arkhefield was contracted to design the masterplan for an entire precinct, and consequently commissioned to design the office building and Energex NMO interior, as well as a mixed-use development.

Architect Juergen Weigl says the development needed to work with the scale of the existing low-rise buildings in the suburb. It also needed to play a role in activating the centre of Nundah, which had a number of vacant retail tenancies.

"Altogether there are 300 residential units in the plan, along with retail premises and this office building," Weigl says. "Already, Nundah is gaining a new dynamic as people come back to work and live in the centre of the suburb. The precinct is close to a train station, which is also helping to energise the area." 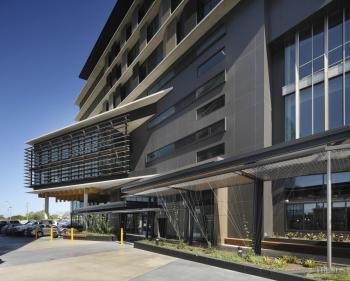 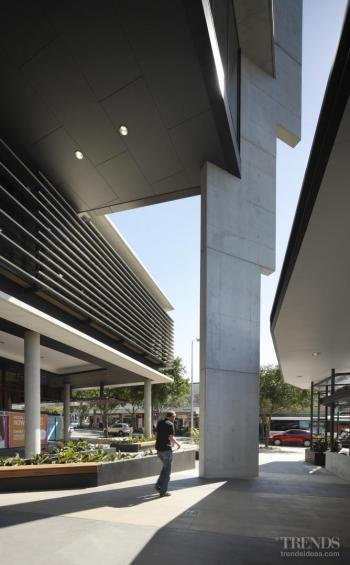 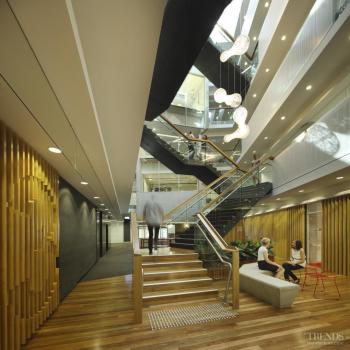 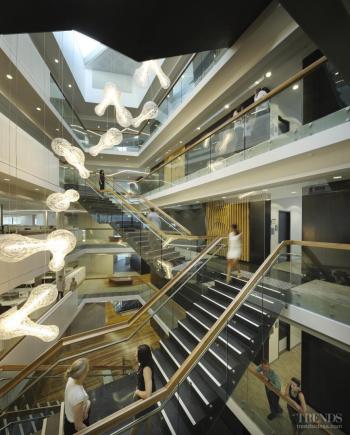 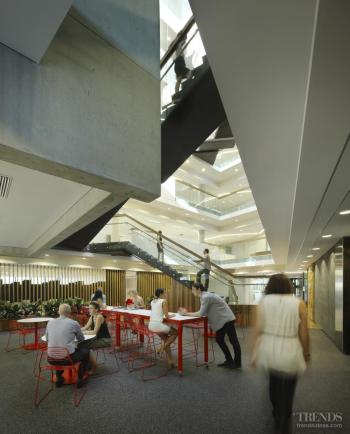 To ensure the eight-storey CT1 building would sit comfortably with the existing low-rise buildings, there is a strong horizontality to the facade.

"We chose a horizontal design language, with concrete elements expressed on the exterior," says Weigl. "Each elevation has a different treatment to reflect varying requirements for sun shading. Angled structural columns on the corners signal the point at which one facade terminates and another begins. These columns, or blades, were also designed to allow unobstructed views back to the city and mountains to the south, and the sea towards the east."

"To express the material palette of the exterior, we have used the same language on the inside, for both fit-outs. For example, we have pulled the concrete blade walls into the building to celebrate its form. Two meeting rooms with exposed structural concrete walls also protrude into the central atrium in the middle of the building."

Weigl says the atrium was a crucial element, but it needed to be warm and welcoming, rather than a cavernous, cold, intimidating space, which is often the case with larger buildings.

"Ensuring the proportions and acoustics made for a comfortable environment was critical. Timber flooring and timber blades along the walls help to introduce a visual softness. We added an acoustic treatment to the walls to control the sound levels in the atrium. A sculptural light installation is another visual device enhancing the key circulation area – the lights appear to dance up the atrium."

The architect says Energex wanted the focus of the workplace to be on collaboration and communication, which determined the idea of open floor plates and the central staircase.

"This increases the opportunities for social interaction and provides a strong visual connection both vertically and horizontally. To allow for this, we pushed the building core out to one side."

Weigl describes it as a non-hierarchical workplace – there are no enclosed offices in the building. Private spaces have been incorporated, but these are defined by full-height glass partitions rather than solid walls, maintaining the sense of transparency.

"We also pulled the work areas away from the building perimeter – this is a circulation area that can be used and enjoyed by all staff, not a select few. And we created zones to introduce a human scale to the fit-out. It is still a large, open space, but there are clearly defined areas with support services in close proximity. Staff feel comfortable in these spaces, but they never lose the context of the whole building."

Energex specified a number of different work options for staff, including fixed desks, hot desking and informal meeting tables. Staff can choose where they wish to work on any given day.

Sustainability was another driver for the design, with the base building achieving a 5 Star Green Star rating, and the interior built to Green Star principles. Key features include a high-efficiency floor plate that maximises natural light and external views, light sensors and rainwater collection and use.

"We also used high-performance glazing, but with a low tint to the glass," says Weigl. "This ensures people outside can see into the building, which fits with the community-oriented principles that determined other aspects of the design."