Sense of arrival at waterfront place

Sense of arrival at waterfront place Discover this article's resources 0

Whatever your personal opinions, there is no denying that the 80s was a decade of great social and economic change. It also saw the resurgence of minimalist design, particularly in commercial spaces. Constructed between 1987 and 1989, Waterfront Place quickly become Brisbane's landmark office tower, complete with 1530m2 triple-height lobby.

"Waterfront Place is located in the same precinct as Riverside Centre and Riparian Plaza – two Harry Seidler-designed buildings – and 111 Eagle Street, making it the premier business address in Brisbane," says architect Mark Damant of Woods Bagot, the firm tasked with remodelling the lobby and canopy of the building.

"In its original configuration, the lobby was a very large open space with minimal furniture – little more than a thoroughfare.

"The building owners wanted to create an activated and enlivened space with multiple zones, which would encourage people to meet informally and socially."

The company had a well-defined brief for what it wanted to achieve, including some features that needed to be retained – the stainless steel columns and the existing stone flooring and wallcoverings. 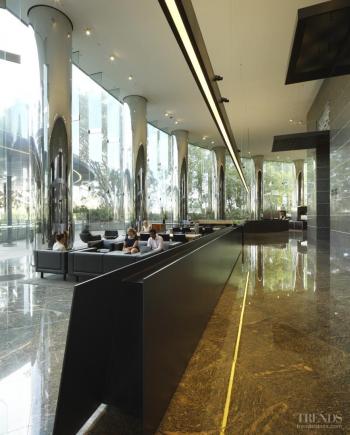 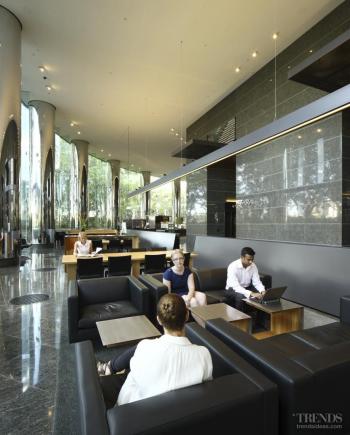 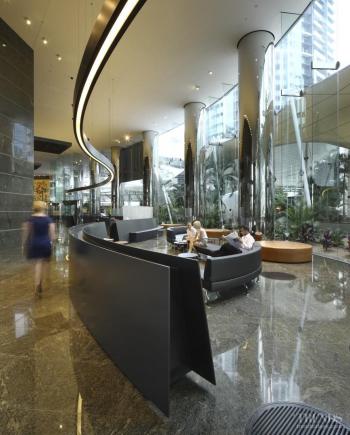 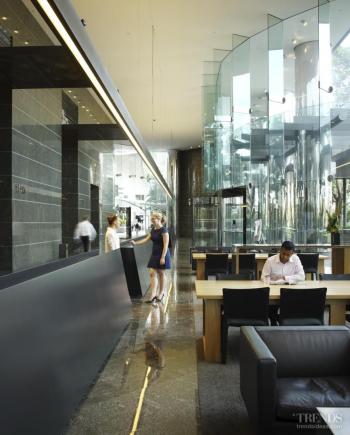 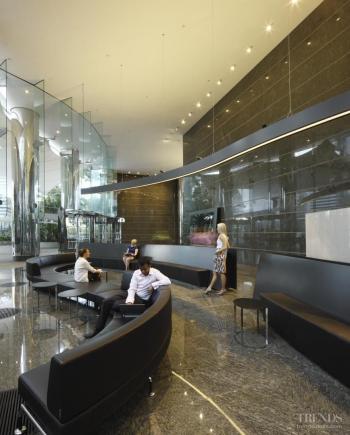 "The security desk, two café spaces and an area with a grand piano were also existing spaces that had to be considered," says Damant.

"After studying the space and analysing the circulation of staff and visitors through it, we came up with a strategy for creating a hierarchy of spaces based on formal arrangements for meetings and working, and an informal arrangement for waiting and socialising – with the ultimate goal of bridging the gap between the office environment and the ‘city place'."

To ensure a clear circulation path, a series of low metal walls demarcates the space. Sinuous light fixtures mirror the flow of these walls, creating intuitive wayfinding signifiers that lead pedestrians through the space and towards the lift lobbies.

"The lift lobbies have also been given a subtle wayfinding treatment through the inclusion of canopies, which break up the expanse of stone cladding and create clear indicators, so visitors and staff can negotiate the space in a free-flowing manner," says Woods Bagot interior designer Bronwyn McColl.

"One of the complexities was to increase the amenity of the space, without allowing it to appear cluttered. To that end, low-profile furniture in a limited colour palette helps keep the lobby orderly, yet welcoming and user-friendly."

The predominant colour is black, but the designer has also introduced tan leather accent pieces and timber elements to bring some warmth to the scheme.

"In the business zone the furnishings take on a more traditionally formal tone, very angular and square, while in the social zone, the furniture is more organic in form and can be used in number of ways to suit the needs of individual groups," says McColl. "This allows visitors to exercise some level of control over their surroundings.

"Overall the remodel has been successful. The lobby gets a lot more use and the spaces live up to the intention. The Woods Bagot offices are within the building, so we get to see the result of our labours on a daily basis."