While the convenience of living in the inner suburbs of a city appeals to many families, the reality of being squashed into a small cottage has its drawbacks.

In these areas, council by-laws often prevent alterations such as second-storey additions or changes to the street appearance of the houses, making it necessary to come up with more creative solutions.

After exploring various options the owners of the home featured on these pages bought an almost identical house next door. They then commissioned architect Lahz Nimmo Architects to consolidate the two buildings, one of which had an existing second storey addition at the rear. While council by-laws prevented major changes to the front of the house, a second storey added to the back of the second house was acceptable.

"The challenge was to stitch the two buildings together at the two levels. We wanted the two parts to feel and operate as one large home with all elements on an appropriate scale, rather than two smaller houses with a sideways link," says Andrew Nimmo.

The integrity of the façades has been maintained and the buildings were connected well back from the street, so the new house now has two front doors and two hallways that meet in the centre of the home. The new upper level now contains a master suite, two bedrooms and another bathroom. 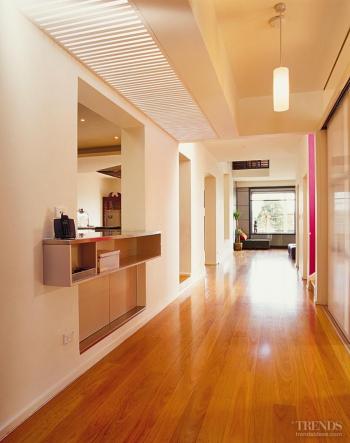 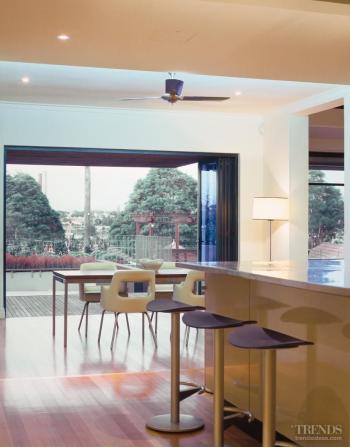 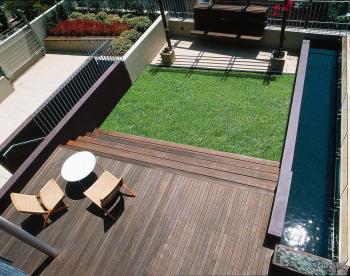 "By linking between the buildings deep within the site, glazing it and ensuring the roof is lower than the second storey additions, it is visually negative from the street," the architect says.

"Internally, to differentiate between the modest cottage at the street entry and the new and joined spaces, the scale of the house changes at mid-point," says Annabel Lahz.

For example, new rooms have larger proportions than the existing unaltered rooms at the front of the house.

At the point of connection, the entrance hall doubles in width before leading to the kitchen, living and dining spaces. Past the link point, a children's rumpus room can be seen from the kitchen or closed off to conceal mess.

Unlike the existing rooms, these rooms are flooded with natural light. It flows in through the glazed wall connecting the two houses, as well as from a double height void, a bridge between the two levels, a strip skylight and the large new openings between rooms.

"These openings provide visual and physical access at several points between the two halves of the house along the length of the ground floor. Views across the full width of the house help to break down the linear nature of the original houses," Lahz says.

The void and bridge also emphasise the existence of the second storey.

Externally from the rear the new two-storey addition is the primary focus. The back wall is clad in zinc that wraps round into the downstairs living area. To keep the focus on the new area, the existing second-storey addition has a pergola to reduce summer sun into the bedroom and provide a screen that downplays the original elevation.

A full-height terrazzo-tiled masonry wall on the boundary side of the new building and a circular steel pole support a roof that protects a second storey deck and frames a double-height external space.

Because of the lane access and the slope of the land at the back, there was already a single garage below the deck. A second garage with storage areas was built in below the landscaped courtyard. Access to both is via an external stairway between the courtyard and lawn.

"This project has allowed us to find an intriguing solution to the dilemma of creating extra space in inner city houses. We are seeing an increasing number of families opting to stay put and work round local by-laws," says Nimmo.