Sheltered from prevailing winds, this walled garden is a restful country retreat – but there's a hint of mystery in its classical order

Country living holds plenty of appeal, but starting a garden from scratch can be daunting – it takes a lot of vision to see beyond a grassy field of several hectares.

But transforming such a field into a country garden was exactly the brief given to Christchurch landscape designer Ben McMaster of Inside Out Design.

"All that existed was a newly built house in the middle of a 1.6ha paddock," he says. "The owner wanted a garden that she could enjoy working in, and which would envelope her with a sense of enclosure. But it had to be protected from the winds that sweep across the plains."

The solution was to create a private, walled garden, and divide the landscape into a collection of outdoor rooms. McMaster describes it as a classical design approach, which is dependent on achieving the right proportions. The landscape was also designed in the traditional manner, to lead the eye from one room to the other.

"It is important to show, or create the illusion, that the garden continues on. Allowing a glimpse through a narrow opening, for example, hints at something beyond and provides a sense of mystery." 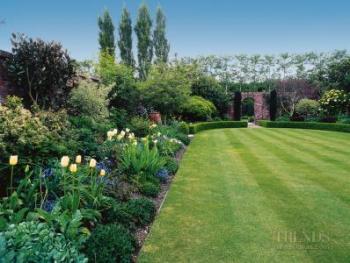 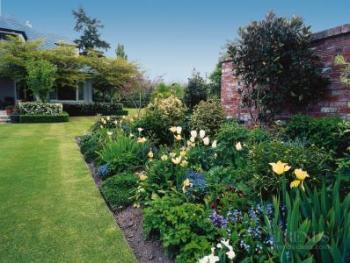 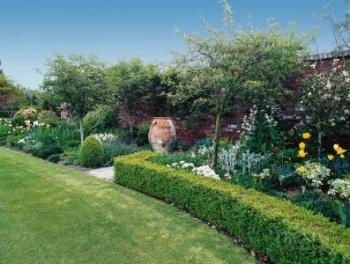 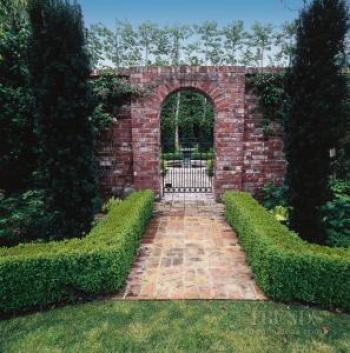 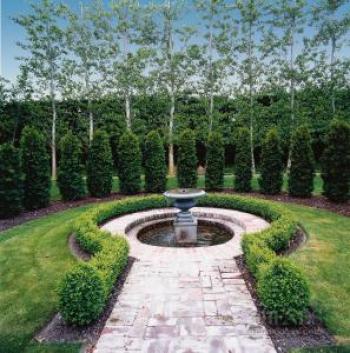 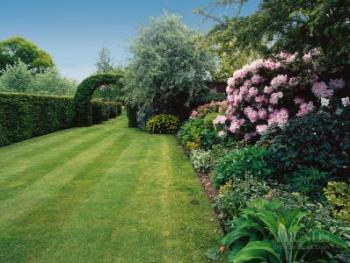 The walled garden has been planted to provide visual interest all year round. McMaster has used combinations of fast and slow-growing plants, both evergreen and deciduous, and built the gardens up in layers. Colours were chosen to complement the red brick of the wall behind.

"The front layer of garden includes tulips and irises, with the green tuftsof scabiosa in the foreground. In autumn, flowering sedum adds a soft, dustymauve shade."

The second tier of the garden includes lily-of-the-valley, and deciduous flowering shrubs.

"Plants with an upright trunk structure were chosen to make it easier to carry out mulching, feeding and cutting back in winter," says McMaster.

"While there is plenty of colour in summer, the landscape has also been designed to ensure it has strong bones in winter," he says. "The rich, dark green of the magnolia, the box hedging, and the two yew trees that act as columns beside the gate, help retain the structure of the garden in winter."

Glimpses of greenery and the sound of running water encourage visitors to explore beyond the iron gate. Here, another outdoor room presents a simple, yet classical landscape – a fountain, pool and formal planting, creating a restful, green retreat.

Upright thuja conifers stand as sentries in front of a semi-circle of young poplars, while a thick, green macrocarpa hedge forms a backdrop. In the foreground, box hedging defines the circular pool. Topiary balls at the front of the box help draw the eye in, says McMaster.

Nearer the house, the designer has created a cross axis, with symmetrical gardens (shown above) flowing out from either side of the house.

"I didn't want the garden to simply drop off into the paddock at the sides," he says. "Hornbeam hedging, which has been trained over an arch, helps to anchor this part of the garden. This is contrasted by lots of silver-leafed plants, including a weeping pear tree and Sorbus Aria lutscens, a white beam tree, which forms a double-sided avenue on the other side of the hedge. The Sorbus aria lutscens was chosen for its ability to withstand the wind and dryness."

Gardens in this area incorporate the pink-flowering Van Dec rhododendron, euphorbia, and a variety of hostas and hellebores. McMaster says there are fewer perennials in these gardens, as he opted for a quieter, more restrained look.

A similar design approach determined the selection of plants immediately in front of the house. Topiary hedges of Mexican orange blossom form neat squares around Prunus Mt Haze flowering cherries, which help to soften the lines of the building.