In the interests of high efficiency, motivation and collaboration, it seems that everything comes under the microscope with a new work place design. And this is probably never more evident than in a building designed to accommodate 1000 scientists from several different disciplines.

The Ecosciences Precinct in Brisbane, designed by the architectural team at Hassell, is a new collaborative research environment that brings together staff from four separate government agencies, covering research themes of marine-estuarine science, plant and insect production,bio-security sciences and terrestrial science.

The building, on the site of the former Boggo Road jail, also heralds a new benchmark for urban renewal. The Ecosciences Precinct is the first building to be completed within a new urban framework established by the government, which will ultimately see an extensive mixed-use development of residential and commercial properties.

Principal architect Mark Roehrs says the building is essentially three structures separated by large covered courtyards on the east and west, and linked by long internal streets on each level running north to south. To counter the subtropical climate and filter the harsh sun, the building is enveloped in a veil of perforated aluminium, which is set 1m out from the facade.

"This creates a sunscreen that protects the laboratories and outdoor courtyard spaces, while establishing the external aesthetic of an articulated and perforated skin," says Roehrs. "The veil reduces the heat load by approximately 40% and stops the glare, bathing the courtyards in a soft light. But because the water can come through, the plants get washed and watered with the rainfall." 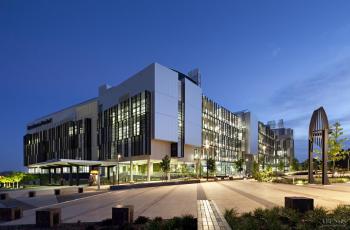 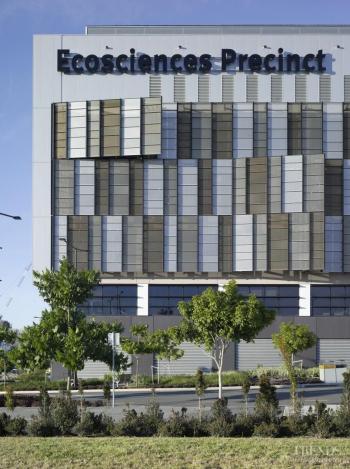 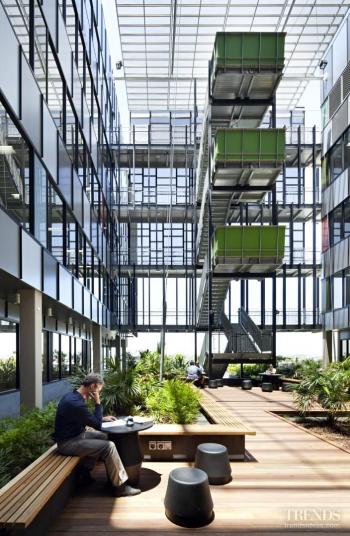 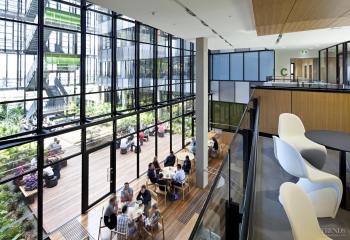 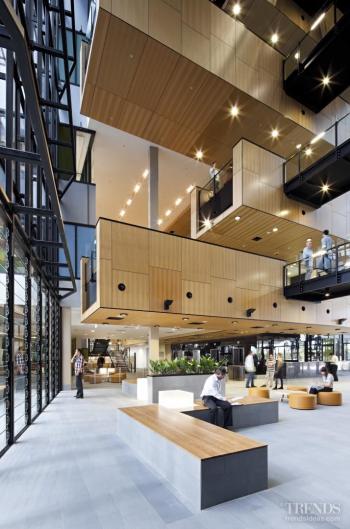 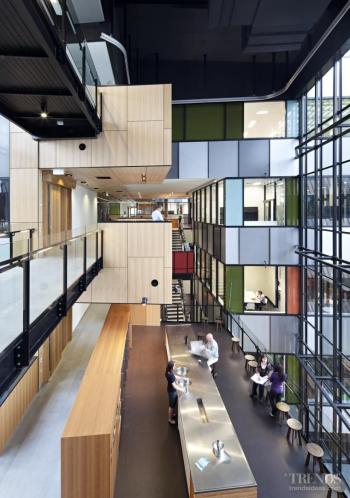 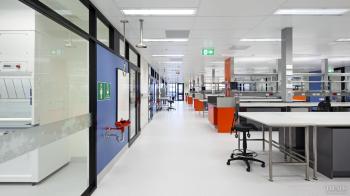 Inside the building, a soaring atrium forms a vertical connection between the internal streets on each level, reinforcing the sense of transparency that defines the workplace.

"Providing plenty of areas where staff could interact informally was a key focus of the design," says Roehrs. "It is often in ad hoc discussions that ideas are germinated. People working in different disciplines can often help each other – there are anecdotal stories about scientific breakthroughs happening as a result of informal chats."

"Essentially, we created a three-dimensional fabric of meeting points across all the strata layers," says the architect. "We also specified materials that would enliven the interior – the blackbutt timber adds visual warmth to the atrium. Elsewhere, coloured aluminium panels reflect the work of the different agencies, for example, the green panels represent the teams involved in plant research, the red references the earth, and blue echoes the colour of the water."

However, Roehrs says the most unusual aspect of the design is the offices-without-walls concept. Instead of providing four separate work places for the four agencies, scientists and staff are grouped according to their scientific outcomes. In other words, people working in similar ways using similar laboratory services are clustered together.

"The co-location of scientific agencies is a major innovation," says Roehrs. "It sheds spatial and operational barriers to optimise collaboration, knowledge exchange and sharing."

For economies of scale and efficiency, the specialised facilities and support activities are centrally managed and located. Shared facilities include greenhouses, controlled environment rooms, stores, sample processing areas, glassware and media preparation, ICT services and electron microscopy. There are also shared meeting rooms on each level and two seminar rooms on the ground floor that can be joined for large groups.

Roehrs says the precinct is divided into three zones – office, laboratory and support. These areas accommodate groups of varying sizes and functions in a generic, flexible and adaptable configuration that can be changed over time as the nature of the work changes. Only 7% of the staff have individual offices.

"We provided a much more transparent office space, with glass walls separating laboratory areas from the offices. It was important to provide laboratory workers with a sense of connection to the people in the offices and vice versa."

In keeping with the Ecosciences environmental focus, sustainability was a key consideration in the material selection. Materials come from renewable resources and have no off-gasses. Roehrs says that in lieu of an existing Green Star framework for laboratory buildings in Australia, the team established its own tools and guidelines. These were developed from the evaluation of similar 4-Star Green Star laboratory buildings around the world.