With its solid masonry construction, this beachfront house is built to weather the storms. But a layered facade softens its perceived size, bringing a human scale to the architecture

Once upon a time, the archetypal beach house was little more than a fibrolite shack with a lean-to and a leaky roof. It wasn't so much a place to live in, as a place to return to at the end of the day when the sun went down and the campfire burned low.

Today, that sense of escape is still there, but beachfront architecture has matured to encompass a whole new lifestyle – one that recognises its roots, yet embraces the location at every turn.

This 1000m2 house, on a four-lot site, is large, even by today's standards. But architect Paul Uhlmann has given it a human scale, to create a warm and welcoming house that wraps itself around the occupants, yet also maximises the spectacular ocean view.

And unlike those baches of old, providing a sense of permanence was a key design element.

"Right from the start, the owners were keen to have a solid, masonry home," says Uhlmann. "But masonry houses can look very heavy, which would not have been appropriate for this site. Consequently, there was a need to combine the masonry with extensive glazing, both to capture the view, and to visually lighten the house." 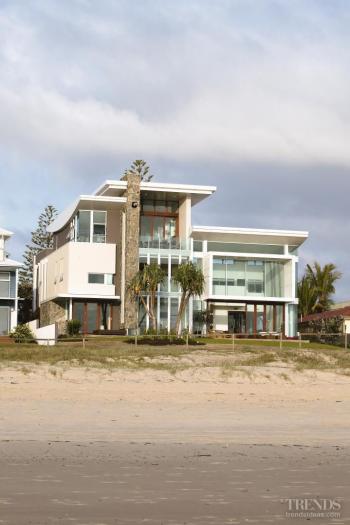 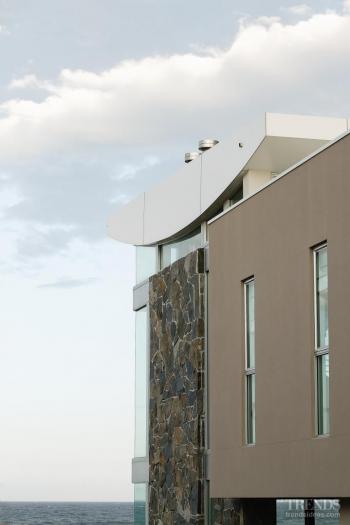 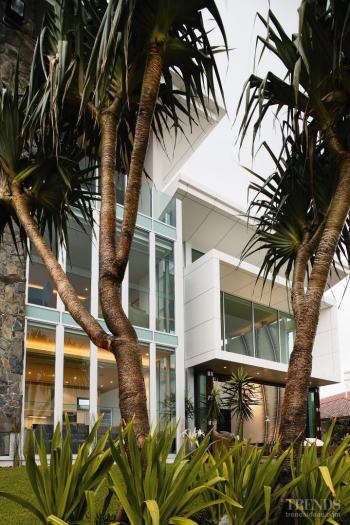 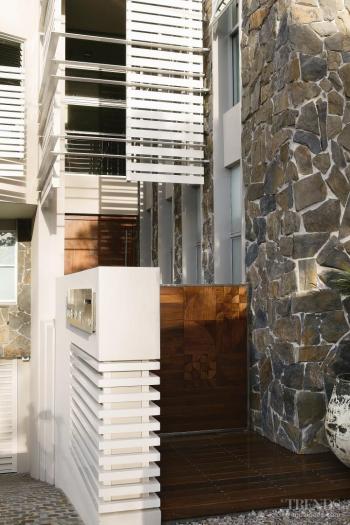 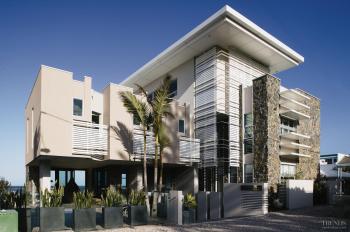 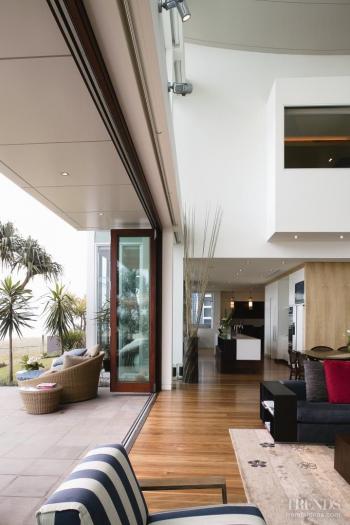 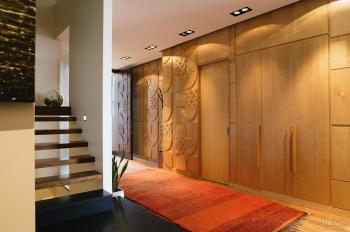 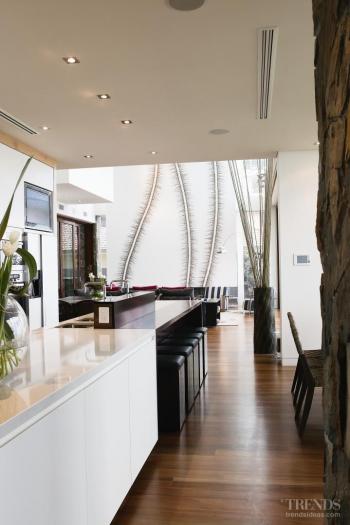 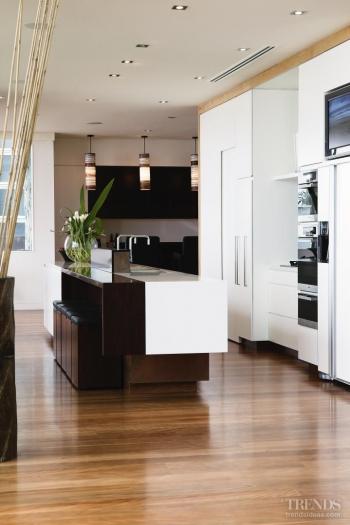 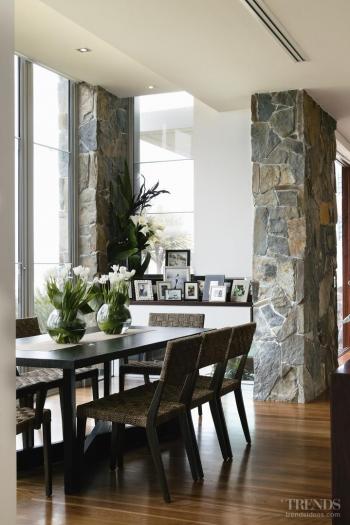 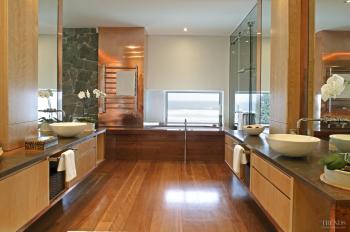 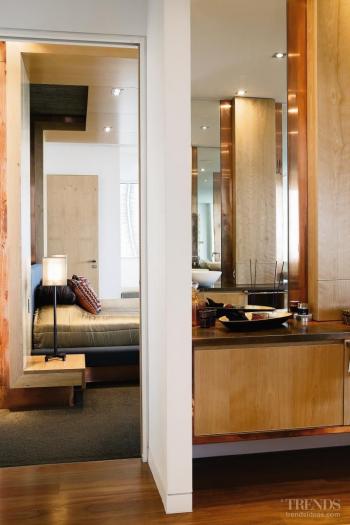 To achieve a harmonious balance between these two elements, Uhlmann chose to layer the facade with overlapping volumes. He also introduced two other materials – Alucobond panels and a locally quarried stone.

"Layering the facade was a way to break up the bulk of the building," he says. "The layers fragment the house so it is not too monolithic. They introduce a human scale, giving it more of a residential feel. They also provide shadowing, which gives the house visual depth."

In addition, the different materials and colours help define the functions of the internal spaces. For example, cut-away elements on the street side of the house highlight a series of bedrooms above the living pavilion, and a wrap-around cream box on the first storey of beach side of the house accommodates the master ensuite.

Large stone walls help to visually anchor the house to the land. Slicing into the structure from top to bottom, they provide a connection between the inside and outside. The composition is further enhanced by horizontal elements that balance the verticality of the stone walls and glazing. These include powdercoated aluminium batten sunscreens. Larger, more structural sunscreens made from Alucobond panels extend towards the street.

On the beach side of the house, extended Alucobond soffits create a rectangular box at the first floor level. This provides much-needed shade to the main living pavilion with its double-height volume, and also allows ocean sight lines through the interior from the first-floor bedrooms.

Uhlmann says that while the view determined the layout of the house, it was important not to give away all the secrets at the entrance. The view is gradually revealed to guests as they move from the entrance hall into the main living pavilion.

"This room, on the northeast corner, is a two-and-a-half storey living space, which became the central design element," Uhlmann says. "As well as opening up to the beach, it opens to the landscaped area and pool at the front of the house, providing cooling cross breezes."

To ensure there is plenty of light in the living pavilion, the roof slopes up towards the sea, leaving space for a line of windows below the eaves. These, in turn, draw the eye up to the sky.

The light, airy feeling of the room is further enhanced by a freestanding wall at one end. The wall, which appears to float away from the side of the house, incorporates a fireplace, and features a mural by a local artist.

"The interior was designed to avoid the corporate look that so frequently characterises large masonry houses, " says Uhlmann. "For this reason, we introduced a mix of materials to the interior as well as the exterior, to make it feel warm and welcoming."

These materials include extensive wood panelling, and a carved, tropical motif that recurs throughout the house – a reference to the owners' time spent in Fiji. The flooring is also wood, with brushbox timber boards featuring throughout the open-plan living areas.

Like the living pavilion, the kitchen is positioned to make the most of the view. The layered elements that define the exterior are also evident on the interior. The kitchen island, for example, is comprised of several different materials. Solid wenge wood and CaesarStone benchtops with waterfall sides overlap the carcase. Wenge wood also features in the built-in bar cabinets beyond the kitchen.

Built-in cabinetry is not limited to the kitchen, however. Bedrooms also incorporate built-in furniture, designed to provide a sense of enclosure. In the master bedroom, for example, beech wood veneer features on panels that wrap around the ceiling and walls, and form cantilevered beside tables. Similar wood provides built-in shelving.

The master ensuite continues the contemporary theme. In keeping with the materials mix, part of a textured stone wall is juxtaposed with shiny copper cladding, while a mix of timbers helps to visually soften the space. Cantilevered his-and-hers vanity units line the sides of the room, enhancing the spacious feel.

To focus attention on what lies beyond, there are low windows at tub height. These appear to slide behind the copper-clad structure, reinforcing the sense of layering that characterises the design.