This bathtub takes center stage amid a backdrop inspired by nature

If there was ever a room in which to relax and contemplate, far removed from the hustle and bustle of modern life, it would surely be the master bathroom. Which is why natural materials and subtle light effects provide an ideal setting for an indulgent soak in the bathtub.

Architect Charles Stinson was asked to design a bathroom that promoted the feeling of being inside an old stone castle. To create this effect he built a feature wall of oversized stone blocks and set the mortar deep to accentuate the stone's color and texture.

The room's focal point, the large white freestanding bathtub, is set into a black walnut frame. The same timber is used for the shutters covering a window that looks onto large evergreen trees.

During the day, these shutters allow shafts of light to illuminate the area, creating linear patterns on the tiled floor. At night, an entirely different ambiance is achieved by dozens of pinlights positioned on the top of each individual piece of stone. These tiny lights create drama and shadow play across the wall, Stinson says.

Recessed halogens have also been strategically placed in the ceiling. These lights, along with the pin lights, can be controlled from the home's central lighting system. 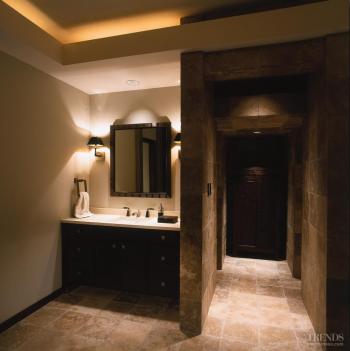 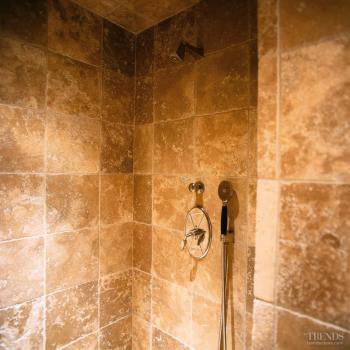 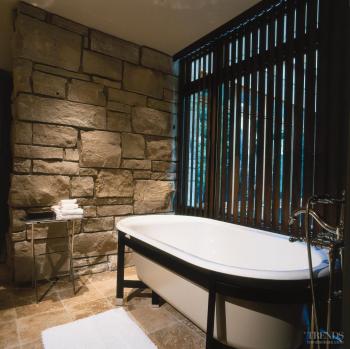 Designing a bathroom that enhances the cleansing ritual was inspired by the owners' time in Asia, where the act of bathing takes on an almost spiritual dimension, says Stinson.

However, the practicalities of contemporary living are also well-catered to in this bathroom. His-and-her vanities are in the same room as the bathtub. They are positioned on either side of a short hallway that leads to the toilet and shower.

The travertine tiles covering the shower enclosure create a look which Stinson says is in keeping with the entire bathroom's cave-like atmosphere.

"It's a nice feeling, being inside an enclosed, tactile space, with the crisp, smooth texture of the heated tiles beneath your feet."