Room with a skew

Comprised of oblique, disconnected wall planes, this playful kitchen sits at the heart of a home that follows more rectilinear lines. A raised roof floods natural light onto work surfaces.

Room with a skew Discover this article's resources 0

Introducing a substantially remodeled kitchen into an existing home can be considered in two ways. One approach is to build the new workspace seamlessly into the home, while another is to create a sense of tension and play between the residence and its remodeled kitchen.

The owners of this reinvented kitchen asked architect Trevor Abramson to create a space that connected well to adjoining rooms and offered an abundance of natural light.

"The 1960s home was designed along rectilinear lines, almost like a grid, so we wanted to create a light-filled, central space that worked off that," says Abramson. "The new kitchen's trapezoid shape, a four-sided figure with two parallel lines, cuts across the right angles and celebrates the contrast. An echo of the room's form can be seen in the central island, which is built in the same shape."

The off-square room is constructed with wall planes, banks of cabinetry and backsplashes that finish short of adjacent walls or the ceiling.

"Several elements here fail to reach their implied destination," he says. "Ceilings cantilever over windows and backsplashes change material halfway along – the overall result is that the eye almost deconstructs the space, creating a visual tension." 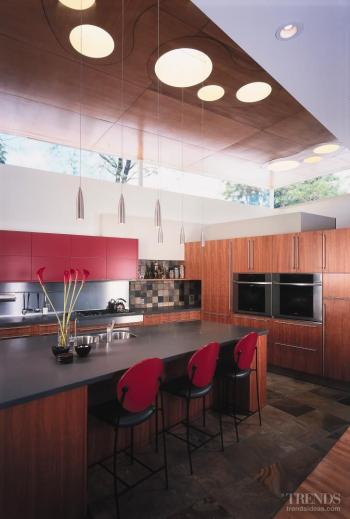 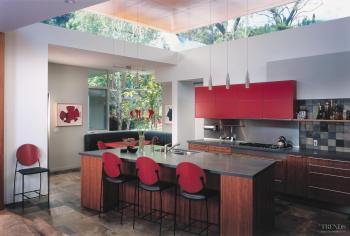 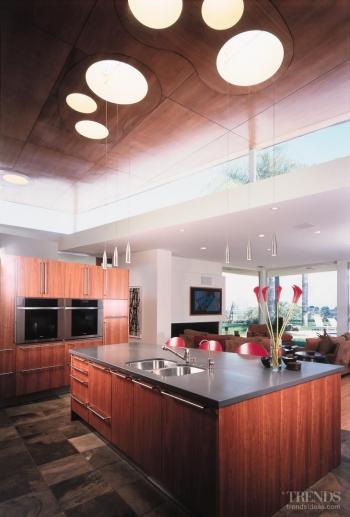 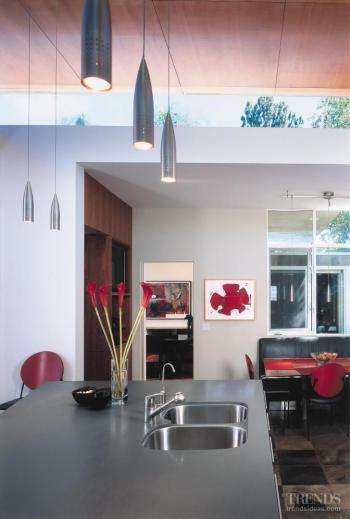 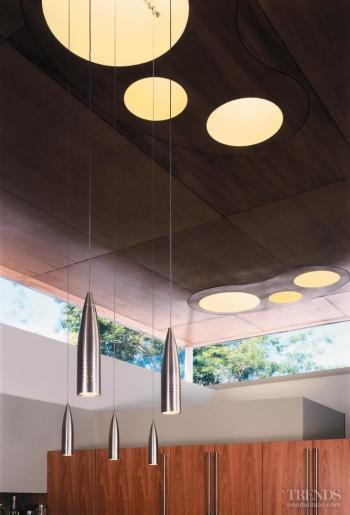 "The crowning touch was to raise the roof over the kitchen from 8ft high to 14ft high and introduce clerestory windows on all four sides," says Abramson. "To further the light-hearted aspect of the room and connect back to the home's 1960s feel we set circular skylights into the raised roof."

The round skylights are set within amoebic forms that cut across the ceiling's panel grids, an echo of how the kitchen cuts across the house's regimented floorplan.

While the remodeled kitchen has been moved slightly towards the center of the home, Abramson maintained the connection to the rear garden and further maximized natural light by introducing a mitered glass corner to the space.

"The effect is that you can see trees through the glass corner, and they are again visible through the clerestory windows overhead," says Abramson.

Built-in banquette seating in the same corner and pendant lights above continue the 1960s feel in what is otherwise a distinctly contemporary room.

"We also knocked down some walls to maximize interaction with the adjacent laundry, breakfast room, home office and the living area," says the architect. "In fact, most of the home from the kitchen back was substantially remodeled."