While a roof garden may, in theory, sound like a little corner of paradise, in reality it can be exposed to the elements or bean unpleasant heat trap.

The latter applied to the outdoor area shown here, which is why landscape architect Stephen Caffyn was asked by the owners of a condominium apartment to make their rooftop garden more usable. The small 39m2 space contained a spa pool set in a raised timber surround in the centre of the tiled roof terrace. But neither were used much because the area had no protection from the sun, and the floor was often too hot to walk on.

"Our first priority was to create shade," says Caffyn. "The owners wanted the work to be carried out so the existing floor and waterproofing would not be damaged at all."

Red and blue passiflora cover a copper trellis, which was built over the spa pool and is structurally supported by the decking to provide shade.A sculptural water feature was designed as a visual focus and to provide background sound and a sense of coolness.

Both the trellis and the water feature are made from copper and shaped into a wave-like form to reflect the river that can be seen from the roof terrace as it flows past the apartment building. 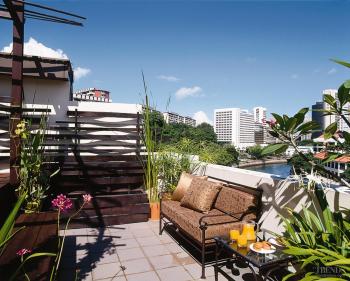 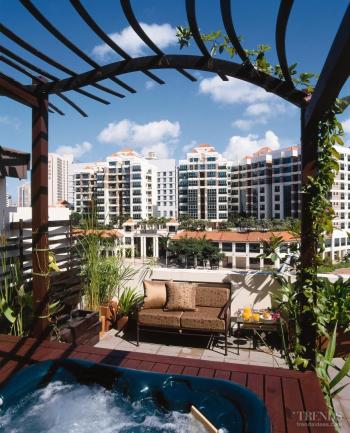 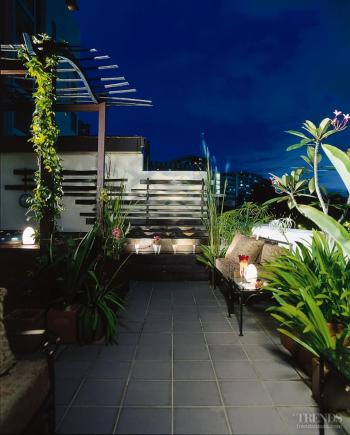 "The copper used for the trellis and water feature was folded into rectangular sections, which had to be specially made for the project. It was treated with a light chemical solution and heat, so it didn't look too shiny and new. Although it is brown at the moment, we expect it to change over time into various shades of green and blue," the designer says.

Water cascades down three weirs into a copper-encased, fibreglass tank. Reeds growing in pots around the trough hint at the riverside location of the apartment.

"Water not only helped to provide sound and movement on the rooftop, but also allowed us to plant a wider range of plant species," Caffyn says.