Even with its futuristic suspended ceilings and concealed lighting, this remodeled kitchen is firmly grounded by the natural stone walls and flooring

An island is invariably the center of the action in a modern kitchen. But for this remodeled kitchen, the role of the island is further emphasized by a dramatic ceiling treatment.

Architect Stewart Davis of CG&S Design-Build says the kitchen, part of a full home renovation, is effectively command central. But it's not just the slightly elevated position that puts it in the limelight – the kitchen is also highlighted by a new circular suspended ceiling.

"The circle concept was introduced as a new organizational geometry for the house," says Davis. "In the kitchen, the curved shape of the central island and the perfect circles of the ceiling and light cove reflect the fundamental truth that the kitchen island is always the center of the home."

This theme is reinforced by a second, slightly smaller circular ceiling to one side, which was designed to hover above a breakfast table.

But while the suspended ceilings have a futuristic look, the extensive use of travertine stone floor and wall tiles has a grounding influence. 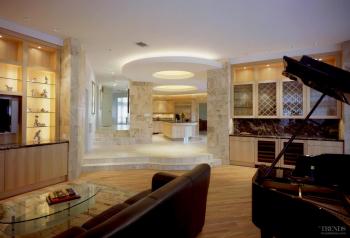 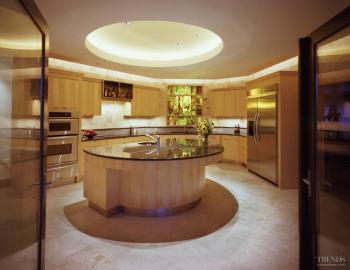 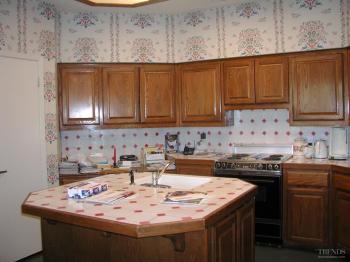 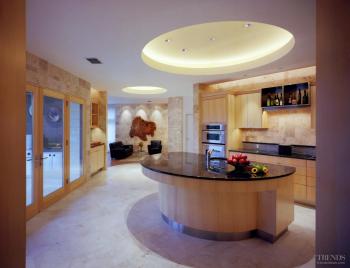 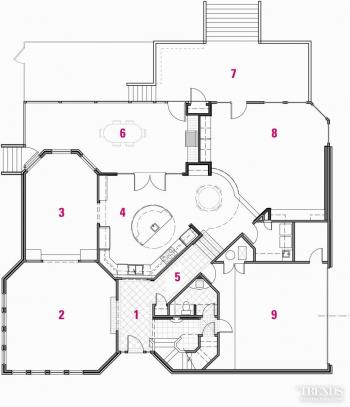 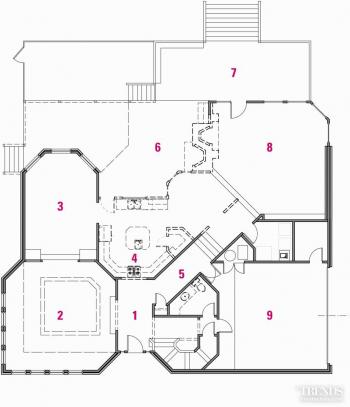 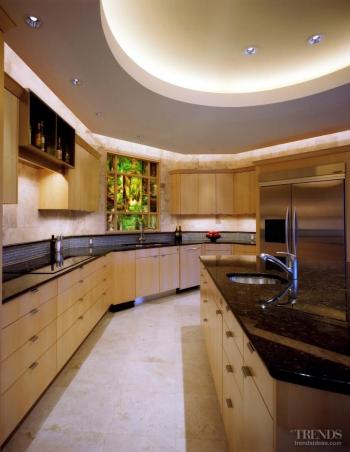 "The inspiration for the stone surfaces came from one of the owners, who is a geology professor," says Davis. "Although the travertine tiles are all rectangular, they have been placed in random, horizontal patterns that resemble natural rock strata. Every tile is different, and many feature holes or crystals. This adds richness, drama and character, not just to the kitchen, but to the living areas on either side."

Other materials used in the kitchen are also in evidence in the adjacent living areas, further enhancing the visual continuity. The frameless, rift-cut maple cabinetry, for example, appears in the wine center in the family music room, and in a small office area at one side.

"The natural warmth of the wood tempers the cooler look of the stone, helping to balance the interior visually," says Davis.

In addition to improving the aesthetics, the remodeling program had a strong practical focus. Davis says the kitchen was reorganized so the traffic flow was kept out of the main work zone.

"We positioned the clean-up center – the main sink, trash compactor and dishwasher – between the refrigerators and the cooking center. These facilities and appliances can be used by the family with no disruption to the main work area."

Selected interior walls were removed to better integrate the kitchen with the surrounding spaces. But the design ensures each area is clearly defined.

"Creating an easy flow between all areas was crucial. The owners also wanted the kitchen to open up fully to the outdoor patio. Consequently, we removed all the existing cabinetry from the exterior wall and introduced a large, four-panel sliding patio door, which gives the appearance of a glass wall."

Davis says the door now opens to a remodeled patio, complete with outdoor grill kitchen. And the glass door has an additional benefit – it allows plenty of natural light to filter into the kitchen.