With its dramatic monochromatic colour palette and sculptural furniture, this city apartment has a sophistication reminiscent of the 1940s

Maximising the outlook is a fairly standard design requirement for apartment interiors. However, for this apartment, an internal focus was very much a priority – despite its prime location near the waterfront.

Architect Andre Hodgskin, who designed the remodelled interior, says taking an introspective approach was a way to create a sense of drama.

"While the apartment has an attractive outlook, there isn't a sea view," he says. "Rather than design an interior that relies on what's happening outside to be the main focus, I wanted to create an opulent living environment – the owners wanted a design that would stand apart as something quite out of the ordinary. They also wanted an interior that would showcase their growing art collection."

Hodgskin says the 10-year-old apartment was originally finished to a high standard, with generous interior spaces, and a building scale in keeping with its location. The original 1990s-style furnishings were in need of a revamp, however.

"We took the existing dark neutral palette and lightened and softened it, for a more updated look. Muted, natural tones and colours and richly textured silks are contrasted by quite severe, solid timber furniture. This gives the interior a grandeur that is reminiscent of the glamour of the 1940s. All the furniture pieces are quite sculptural and bold." 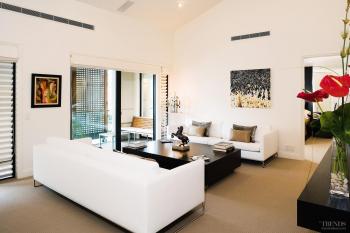 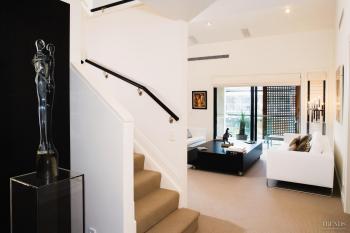 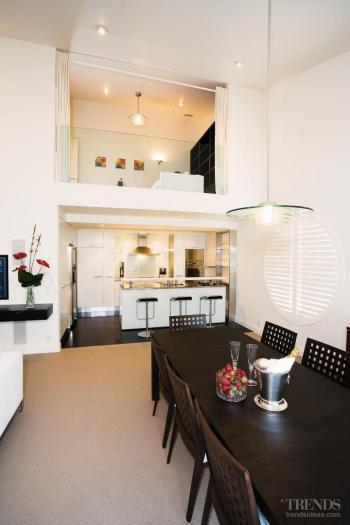 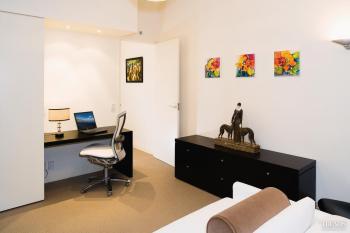 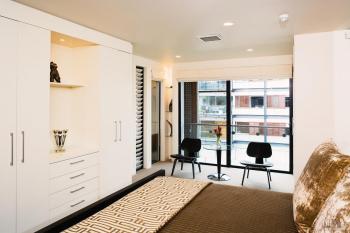 "The continuous tubing that forms these supports defines the perimeter of each sofa. It also makes them appear to float off the floor, enhancing the slightly retro look. Similarly, the large, square-edged, coffee table, made from ebony-stained American oak, appears to float within the space. A classic light fixture mounted on a perspex base creates a similar effect."

A Ping Pong wood dining table and dark-stained lattice-backed chairs from Matisse provide a link to the sliding, latticework screens on the balcony.

"The chairs keep this visual language going," says Hodgskin. "The wood is also similar to the timber floor in the kitchen.

"We opted for a simple palette of materials, which is repeated throughout the apartment, creating a continuity that adds to the sophistication. Fabrics, for example, repeat textures and tones, helping to visually connect the different spaces."

The double-height volume of the living room incorporates a mezzanine study, which doubles as a third bedroom. New glass balustrading replaces a solid half wall, providing a further visual link between the two living areas.

The kitchen, tucked beneath this space, was also re-fitted. Cabinet doors were replaced, and a bulkhead was introduced to help define the work zone. New stainless steel elements include benchtops, a wide toekick, and a high shelving unit that conceals plumbing for a coffee machine.

Two bedrooms – one opening to a covered courtyard, the other to a balcony – were also re-designed. Customised furniture items include two oval bedside tables that have a sculptural 1940s look.

Mirrored walls behind the bedheads enhance the sense of space, giving the impression the beds are freestanding.

Hodgskin says he treated the covered outdoor courtyard as another room.

"Hanging a large, ornate mirror on the courtyard wall was a way to dress it up as an extension of the living space," he says.

New outdoor furniture was also chosen for the balcony – chairs with latticework backs provide another visual link to the sliding screens.