The Orange Hall development includes strengthening and restoring the classic dance venue and the addition of commercial, residential and retail elements alongside

The Orange Coronation Hall – also known as the Orange Hall, or simply the Orange, on Newton Road in Auckland opened in 1923 and soon became the city's number one party spot with regular public dances and other social events.

The venue has now been given a new lease of life, fully refurbished and integrated with a wider mixed-use development – called The Orange.

Crosson Clarke Carnachan Architects with Ken Crosson as project architect designed the forward-looking project. Dominion Constructors undertook the construction of the new build along with the full refurbishment and strengthening of the original Orange Hall – thus preserving a rich slice of Auckland City's architectural legacy. And the high calibre of the refurbishment didn't go unnoticed – last year Orange Hall won the Heritage section of the Auckland NZIA Awards.

The new buildings in the mixed-use development wrap around behind the Orange Hall, creating a public walkway that links the old and new as well as the corner streets. Linked by a seismic joint, the Dundonald St building has 61 apartments – 32 studios, 24 one-bedroom apartments, five two-bedroom penthouses and basement parking. The Newton Rd building, with a sweeping curved wall and orange aluminium fins, is a mix of commercial floors and six New York-style lofts, each with a mezzanine.

Challenges for Dominion Constructors included the logistics of the very busy central city site and the complex undertaking of restoring and strengthening this piece of Auckland history. 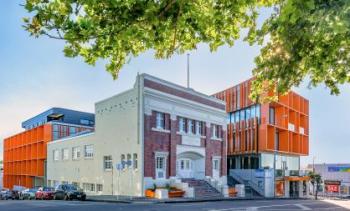 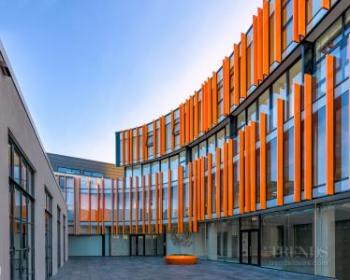 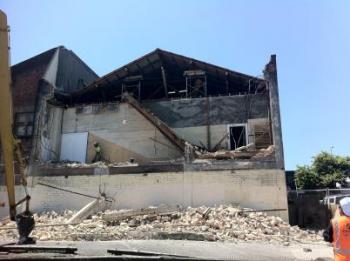 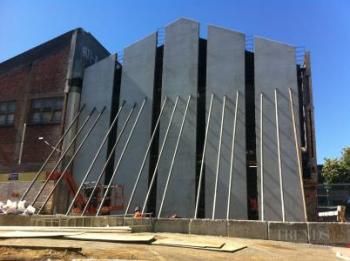 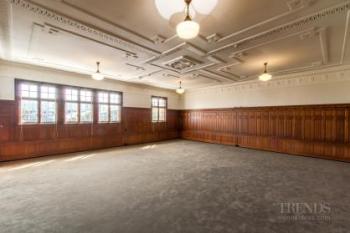 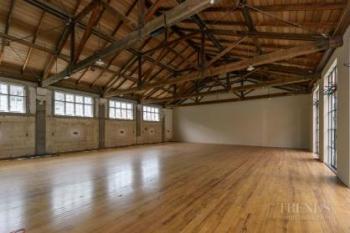 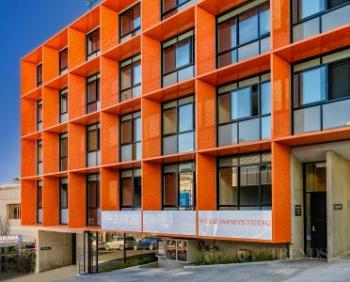 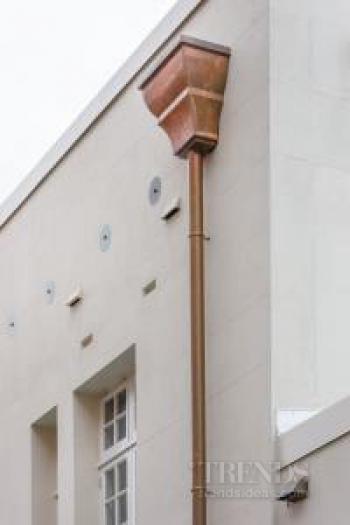 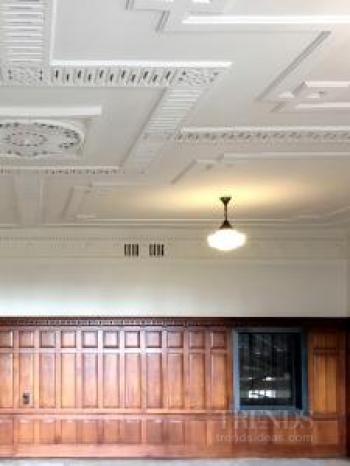 The Orange Hall, originally three floors, was partially demolished to enable both the new build and the structural strengthening of the hall prior to its refurbishment. In fact, several complex structural challenges were addressed by Dominion before the final rebeautification of the hall.

The Hall was stabilised with 10m high precast concrete panels to two of the four perimeter walls connected to the roof trusses and floor substructure. The design rationale was for a stiff structural three-sided box with the remaining fourth wall not contributing to the structural integrity. The three walls were connected by new roof and floor diaphragms. The fourth wall, consisting of double skin brickwork, was strengthened by the application of flexible sprayed concrete containing polyester fibres, Flexus, a recent engineering product innovation from Reid Engineering. This was one of the first projects to utilise the product, which was suggested by the structural engineer with Dominion arranging and coordinating the process from there.

A pile inclinometer and registered surveyor monitoring targets placed on the existing hall were used to confirm no excessive ground movement was occurring during the excavations associated with the new building work – as this could have potentially affected the structural stability of the hall.

The internal refurbishment included restoring and polishing the lower level concrete floor, together with preserving the timber roof trusses and the timber dance floor. Other work included carpeting the third level, installing custom-made partitions in the bathrooms, replacing and upgrading the lighting throughout and replacing an outside window with a door to accommodate a future café leading out to the new court yard.

The final stage was to clean, repaint and seal the exterior to prevent ongoing dirt build up and to ensure ease of maintenance. The stairs were also hand ground to remove years of paint and expose the original pink-toned granolithic screed. Overall, the Hall's interiors were kept as simple as possible to highlight the period features.