Drawing on local influences and architectural history, architect Stephen Kanner designed his own home with a modernist slant

Architecture is as much about history as it is about design. Influences from the past permeate new works as architects seek to develop their own interpretation of established ideas.

The extent of this can be seen particularly clearly in regions that have had time to develop their own localised style of architecture. One example is southern California, where architects such as Richard Neutra are credited with establishing the state's modern regionalism, with designs employing light metal frames and stucco finishes. Another feature of Neutra's designs were wall-sized, sliding glass doors which opened his houses to the landscapes around them.

The influence of this regional design history is reflected in the work of third-generation Californian architect Stephen Kanner. His modernist aesthetic, seen in the design of his own home, has been inspired by nearby houses designed by the likes of Neutra and Charles and Ray Eames.

"The case-study homes in the area and the local past have both had an effect on my design. However, it is a house of its time. The textures, materials and fenestrations make it a personal statement," says Kanner.

"I'm a fan of modernism, but it needs to be made livable. The works of people like Le Corbusier may be spectacular in a clinical way, but warmth is more important in a building that must serve as a family home." 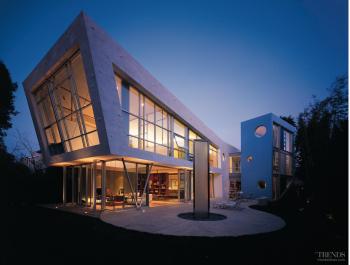 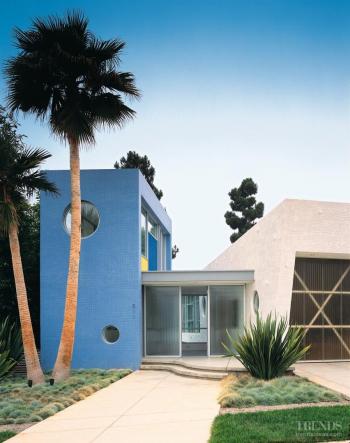 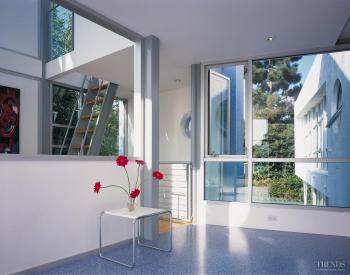 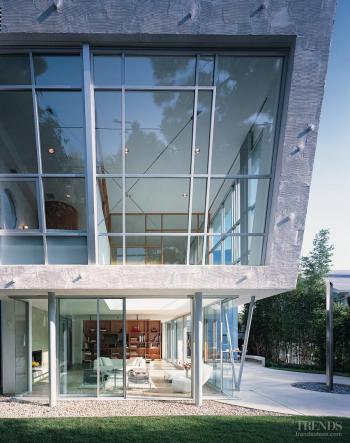 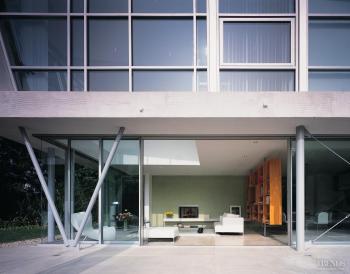 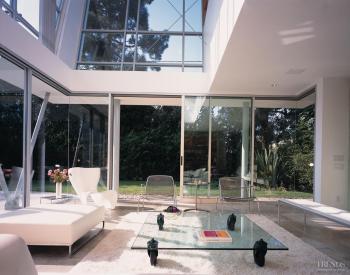 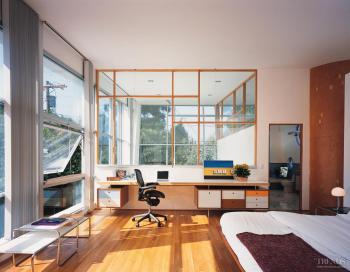 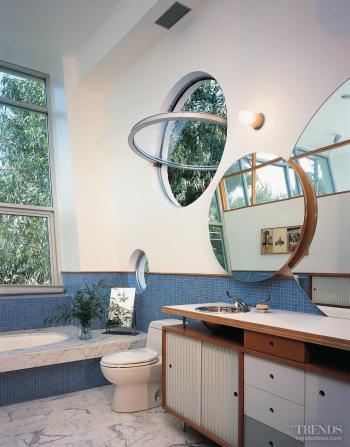 This warming-up of modernism was one of the challenges Kanner addressed in the design of his home. The other was creating a bright, modern residence able to embrace the outdoors.

"Blurring the line between the inside and outside of the home was of the highest priority," he says.

"With a site the size of a standard tennis court, the site plan was of great importance. The question was, how could this fairly typical site be utilised to make it seem larger and more open?"

"Pushing the main body of the 297m2, two-storey structure to the north side of the site allowed the design of the building's envelope to become secondary," he says.

"With the placement and size determined, the other elements fell into place. This is a house about lifestyle, not just another home with a contemporary façade."

With the home on the north side of the site a wide balcony was extended to the south, with the generous setback allowing plenty of light to enter the house. Large sliding glass doors can be fully opened to allow the inside and outside to merge.

The size of the site and its location in the midst of a well-developed suburb meant careful landscaping was a critical part of the scheme.

"Landscaping was the key to creating our own private world even though we're surrounded by so many neighbours, with no views," says Kanner.

Timber bamboo, black bamboo and ficus hedging have been planted in front of horizontal-slat cedar fencing to obscure the neighbouring homes. With privacy created, the family are free to enjoy the expanse of lawn, gravel paths and balcony in peace.

From the street the house was intended to make a low-key impression, with just a single-storey frontage. A V-shaped palm creates a layered look over the front façade while bands of Japanese grass, gravel and lawn recall the scoring pattern in the hard surfaces of the front section.

"The subdued frontage was created because we thought the modernism of the design might not necessarily be embraced by all residents of the area," says Kanner.

The natural slope of the site means the entry level is above the main living areas and the base of the stair tower, – the home's circulation space off-set from the main structure. The palette of materials includes a two-coat stucco, with a scratch-coat finish on the exterior, and customised, commercial-grade aluminium window joinery.

"We offset the cost and complexity of the exterior with less costly interior materials," says Kanner.

Walls are finished in plywood and cabinetry is a combination of lacquered MDF and apple ply veneers. The lower levels have exposed concrete floors, with marble tiles and oak in the up-stairs spaces.

The effectiveness of these low-cost solutions can be seen in features such as the floating plywood wall which divides the main living area from the dining room. This provides storage and a strong visual element.

A feature wall in the main living area is covered in glass mosaic tiles. A tinted grout was used so the outlines of the tiles visually recede. The wall-mounted hearth is underlined by a thin slot of light, this is part of a lighting scheme that avoids downlights, preferring indirect sources of light instead.

The modernist picture is completed by the pieces selected to furnish and decorate the space. These include contemporary classics by Le Corbusier and Marcel Breuer and an antique Caucasian rug. Each one is an original, part of a collection acquired over time by Kanner.