Bathroom fit for a king and queen by Chuck Peterson

Often a grand residence will combine formal living spaces with more relaxed family rooms. However, where a homeowner's presiding love is for the pristine appeal of the public areas, this look may also be introduced in the most private room of all.

This bathroom forms part of a new home designed by architect Chuck Peterson. While the house is on the West Coast, the owners asked that it be designed in East Coast Southern style – with symmetrical elements and classic detailing.

"The master bathroom – slightly removed on the upper level of one wing – is one of the few private areas to reflect this refinement," says Peterson. "The space has clean white paint finishes, symmetrical his-and-hers vanities, and matching paired etched glass doors leading to the toilet area and shower stall."

Taking center stage is the freestanding tub. While this feature has a graceful, traditional look, it is also an aerated spa bath.

"Several elements were inspired by this piece," says the architect. "For example, the recessed ceiling has been designed to echo its form. I dropped the perimeter ceiling, creating an air of intimacy and at the same time allowing for a deeper elliptical element. This has a radius crown that ties back to similar detailing around the edge of the bathroom." 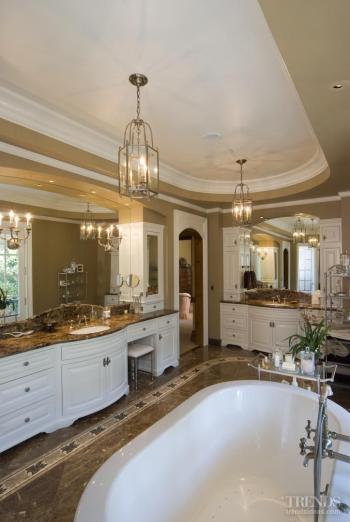 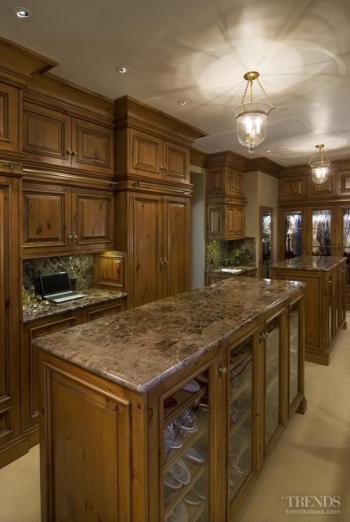 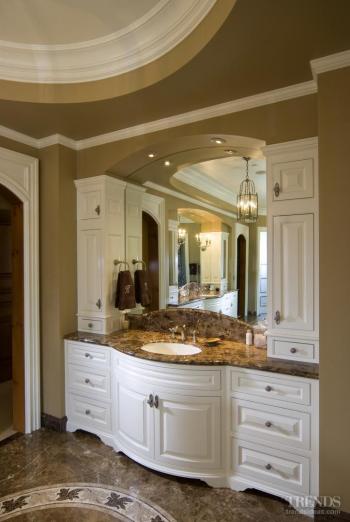 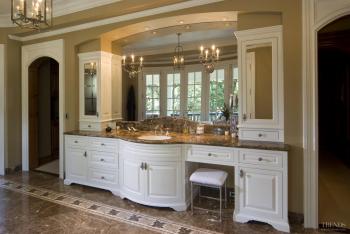 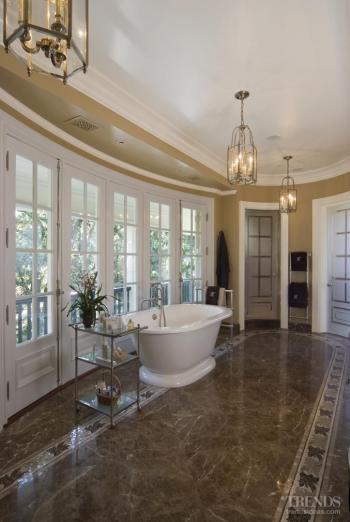 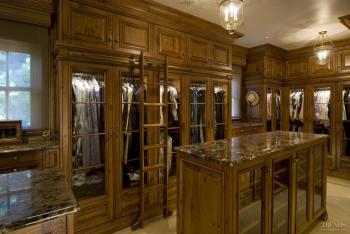 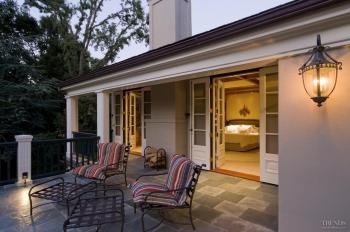 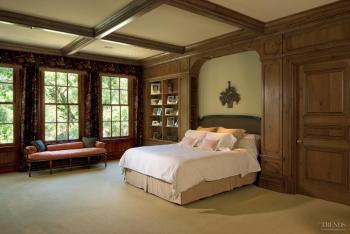 The shape of the room also defers to the tub, with the run of French doors curving out from the main footprint of the bathroom. This creates the visual impression that the wall of glazed doors is making way for the free-standing tub.

These curves are picked up again in the decorative arches over the vanities and above the doors flanking the larger of these. One of these doors leads through to the dressing area and the other into the master bedroom.

"In addition, the rich, veined marble floor has a mosaic inlay that also follows the lines of the curvaceous tub," says Peterson.

The adjacent dressing room is more typical of other private rooms in the home – offering formal detailing in conjunction with the warmth and informality of exposed wood surfaces.

"The dressing room has a theatrical air, with library ladders reaching to the more remote storage cupboards and glass-fronted wardrobes," says Peterson. "Really, the entire master suite combines an air of formality with a sense of personal luxury."