Looking to depart from a safe, demure décor doesn't necessarily mean introducing the colours of the rainbow. Dark, rich tones can bring interest to your interior while textures and reflective surfaces will add a sense of depth. The result may look the part during daylight, but its true effect is best realised at night.

The home featured on these pages was created when the owner procured and merged two adjacent apartments. These were almost completely stripped out to make way for an extended and comfortable living space. Departing from their history of living with cream interiors, the owners asked Ray Lind of Martin Hughes Architecture Interiors to strike out afresh.

"Part of the brief for this residence was to create an interior suited to entertaining," says Lind. "To make the décor stand out after dark and fill the brief to depart from muted tones, an emphasis on depth and reflection was appropriate."

"While some elements are carried right through the home, the hand-polished, three-dimensional plastering in the entry's ceiling void makes asingular and dramatic statement," says Lind. 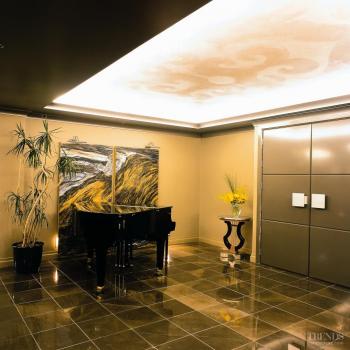 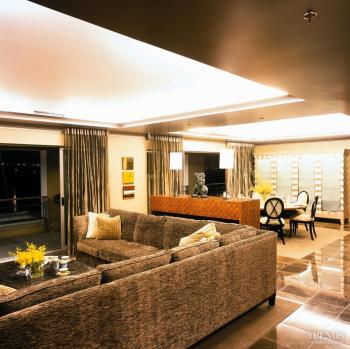 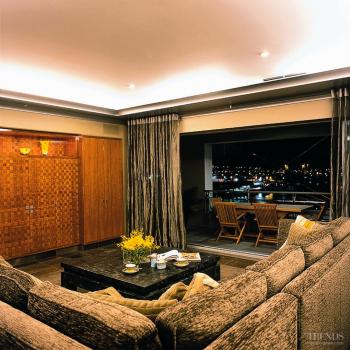 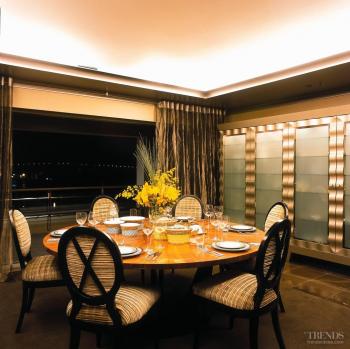 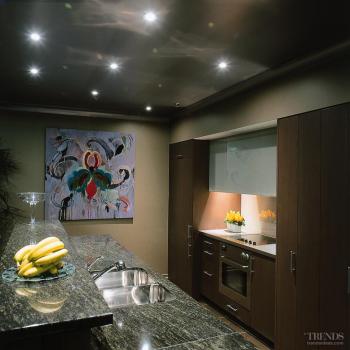 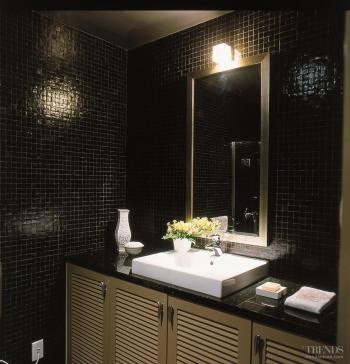 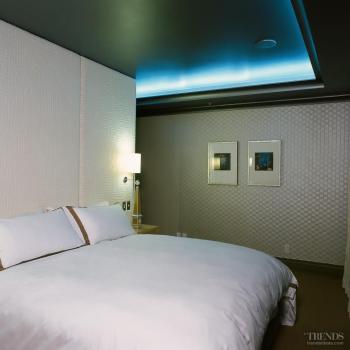 "Beyond the entry area, the living room and dining area are indicated in part by wool carpet inserts in the marble floor," he says. "With so many hard surfaces, the carpets also worked as sound buffers."

Lind custom designed most of the home's furniture, including the unusually tall woven walnut veneer buffet which serves as a room divider.

"If I'd designed it as a more conventional, lower-standing piece, it would have been visually lost behind the couch and failed to separate the areas," says Lind. "The extra height also makes it more useful as a serving counter."

On the other side of the dining table, an Art Deco-style cabinet provides eclectic contrast. Also designed by Lind, this contains dinnerware and is finished in a high-sheen lacquer with interior-lit frosted glass panelling. The designer wanted customised contrasting pieces to play off each other throughout, with sheen and texture providing the unifying theme.

This linking motif also extends in part to the home's soft furnishings. The curtains are part silk and part stainless steel, and complement the metallic ceiling overhead.

"While appearing quiet in tone when flooded with daylight, at night the apartment's various sheens and deep hues come alive and are seen as a complementary extension of the harbour views beyond," says Lind. "With floor to ceiling glazing maximising the view, issues of light were always going to be fundamental to the interior."

Set back from the light-filled living area, the kitchen features more muted tones. A Carrara benchtop and cabinetry were retained from the original décor, with the latter stained to match the new fitout.

The bedroom also features the metallic ceilings and marble floors. However, the central ceiling void, ornate in the entry and unadorned in the living areas, is given a different treatment here with the use of blue fluorescent inset lighting.

Texture features prominently in this room, too. Vinyl wallcoverings provide a silvery sheen, while the wall behind the bedhead is decorated with upholstered panels. This wall is freestanding, with the dressing room and ensuite bathroom behind it. The wall is positioned not only as an effective screen for the ensuite, but also to orient the bed to the view.