How to handle a seaside residence to be used primarily as a home-away-from-home for a couple, and less frequently as a sanctuary for their extended family and friends? In terms of economy of space, ease of up-keep, and even winter heating, one option is have an upper level as the primary living space when the couple are there alone, with a lower floor coming into play when the residence's occupancy swells.

The holiday home shown on these pages follows this dual-use agenda. Architect Julian Ashton explains how the home is demarcated and how the design achieves a spacious, uncluttered feel that lets the environment take pride of place.

"The house is owned by a semi-retired couple whose family often pay extended visits. Partly in response to the varying occupancy numbers, the residence has distinct levels of use, with the uppermost floor largely self-contained," he says.

The living and dining areas, the kitchen, master bedroom and ensuite, and a small niche study are all on this top level, which can be accessed by lift or stairs directly from the basement. The bottom or basement level contains a garage, the pool plant room, workshop, extensive storage and a foyer.

Visitors and extended family are accommodated on the second, intermediary level, which looks out onto the pool. Here there are two bedrooms with ensuites, a studio and second-level garage. 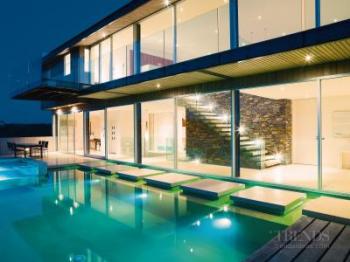 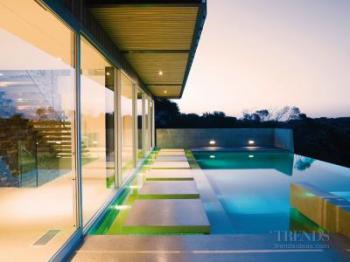 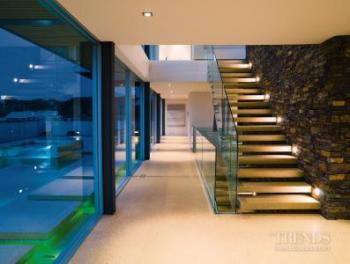 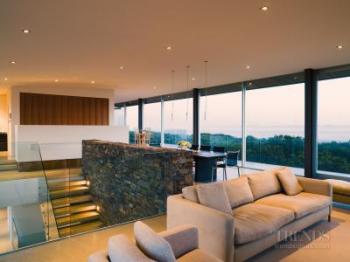 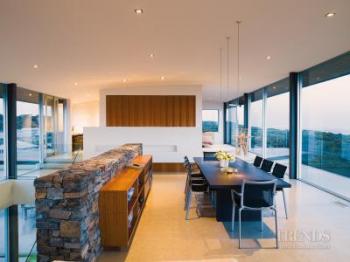 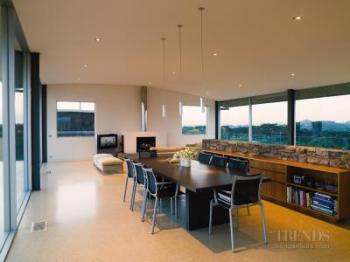 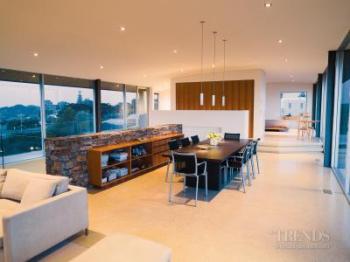 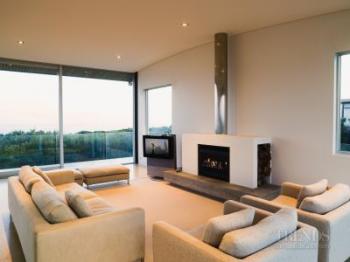 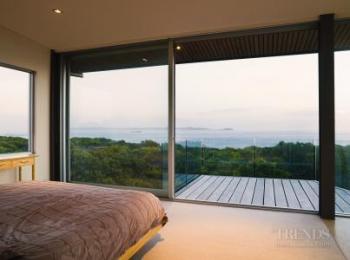 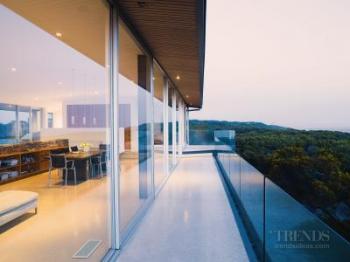 "A void stairwell and adjacent stone wall connect all three levels visually and are a central feature of the home. Glimpses are afforded from the uppermost level down through the stairwell and glass balustrades out to the pool," says Ashton.

The stone wall is the spine of the home, providing a solid, warm-toned central element. The wall anchors the design of the home, creating a sense of strength and permanence, while the surrounding living spaces have a light, open feel that connects with the surrounding coastal environment.

On the second level, the stairwell acts as a subtle division from the central corridor. Visitors entering at this level can walk past the stairs that lead up to the third level and then turn across a small bridge over the stairwell void to reach the second level bedrooms. This gives the bedrooms a sense of privacy. The bedrooms are outfitted with amenities such as refrigerators and coffee-making facilities, giving them some independence from the owners' domain upstairs.

The stairwell also has a chimney effect in terms of heating. When the couple are alone in winter they only heat the top floor. However, when the level below is heated for guests, the heating upstairs is turned down – the heat rising through the stairwell from below warms both spaces.

In summer, the home's narrow footprint means that with all doors open to the decks, cross-ventilation is easily achieved.

The open layout ensures nothing stands between the owners and the scenery. However a central compartmentalised kitchen does provide a degree of privacy between the living area and master bedroom. The majority of this kitchen can be hidden away behind cedar doors to achieve a minimalist look that doesn't detract from the views. Opposite these doors, a bench and hob are also concealed from the living areas behind a white feature wall.

The more private bedroom, ensuite and study area is differentiated only by a subtle, two-step change in level, and by a variance in materials on the decking outside the windows.

"Materials play an important part in the clean, uncluttered look of the home, with the stonework, concrete, and western red cedar being principal elements," says Ashton. "Perhaps the most emphatic example is the sandy-coloured concrete which runs through all levels of the interior, the exterior paving and pool surround – and is even used for the home's cantilevered stairs."

The concrete stairs are a striking feature of the home. Each tread is reinforced with steel rods, running right through the concrete base that lies at the heart of the stonework. The rods are bolted on and the fixings clad in stone to complete the look.

From the sandy tones of the concrete to the open-plan top floor layout, the interior maximises appreciation of the location in every way, and so, too does the home's expansive design.

"Situated on a headland, on a double site, we had the luxury of building across the two sites, orienting the stretched, glass-walled northern and southern faces of this slender home to the views."

The pool, spa and outdoor living areas are situated along the sunnier, northern side of the home.

"The asymmetrically curved roof dips to meet 2.7m-high glazing on this side – providing a degree of solar shading," says the architect. "On the opposite side of the residence the arc is less pronounced, allowing the glazed walls to soar up to 3m high to meet the taller roofline. This provides views of not only the seas but the coastal skies as well."