This central kitchen has a contemporary, understated air that enhances rather than detracts from the views

A kitchen positioned at the heart of a home sometimes has to balance its aesthetic against that of the interior as a whole.

This centrally set kitchen by designer Joanne Godding replaces a tired workspace in the same place. The old kitchen had blocked views out to the conservatory in one direction and to the ocean in the other.

"The owners gave me free rein on this project, and in response I designed a modern, open kitchen that would free up the spectacular outlooks," Godding says.

"Where the old kitchen had mid-height cabinets, the new cabinetry is set high on the wall or under the bench – allowing sightlines through."

In addition, the island's rich wood veneer reflects the views in its polished surfaces. High-gloss white cabinetry and glass backsplashes add to the overall reflective effect. 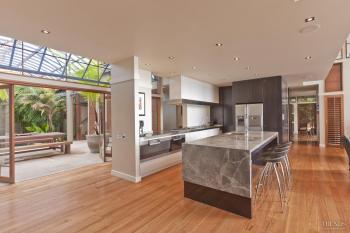 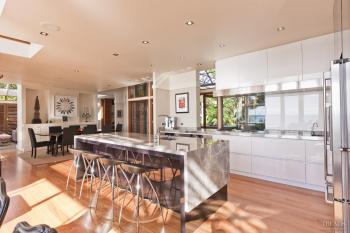 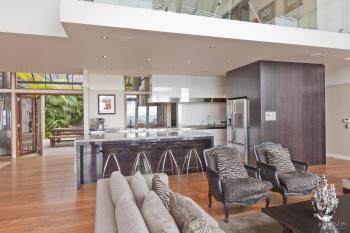 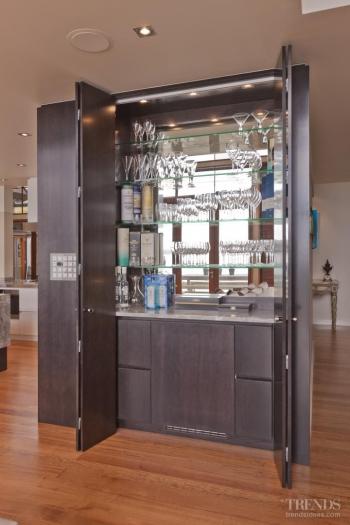 Downplaying the kitchen's practical role helped integrate it with the adjoining spaces.

"All the messy aspects of kitchen life – such as cookers, waste disposal and prep sink – are set on the back wall," says the designer.

Similarly, a scullery, bar and home office have been subsumed into a simple box form. This has been finished in the same veneer as the island but with a honed surface, to downplay its presence.

"While we didn't want the kitchen to overwhelm, or even lead the interiors, it also deserved a rich feel of its own," says Godding. "To this end, we introduced a marble wraparound benchtop as a touch of material luxury that was appropriate to the house."