While the sleek, contemporary lines of this house owe much to modernist traditions, the mix of translucent glass and dark mahogany surfaces creates a warm and inviting interior

Renowned American architect Frank Lloyd Wright once said that the space within a building is more important than its enclosure. The statement reflects his belief that buildings strongly influence the people who inhabit them.

It's a concept that has been embraced by the designer and owners of this condominium. It's also particularly relevant – the design of the owners' previous home was inspired by Frank Lloyd Wright's Fallingwater house. And, as their new condominium was simply a shell when they bought it, the owners welcomed the opportunity to create a living space that reflected their preference for an open, light-filled home.

"We replaced the small panes in the upper level with single, large windows, which were more in keeping with the streamlined, contemporary look we were after," she says.

The other, most significant alteration to the shell was the relocation of the stairs. The original staircase near the entrance was removed, leaving a square-shaped void to the second floor. 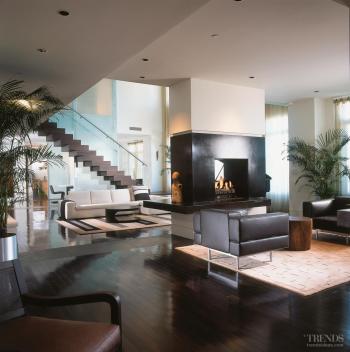 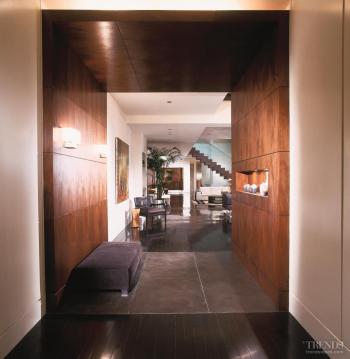 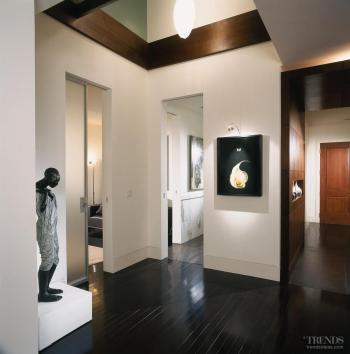 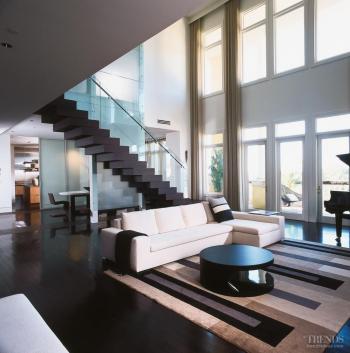 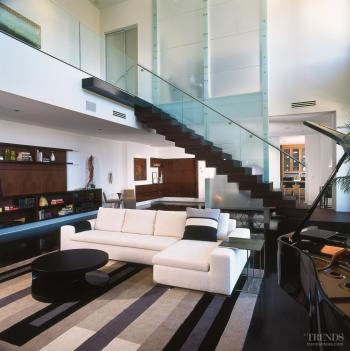 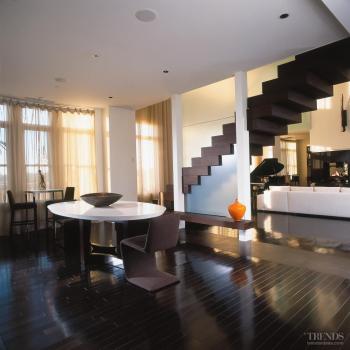 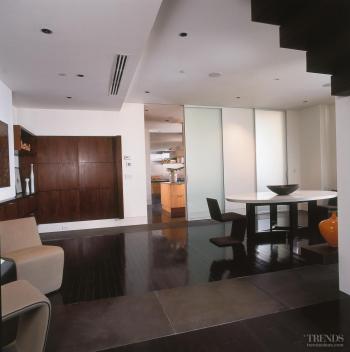 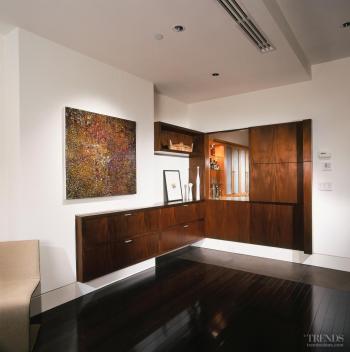 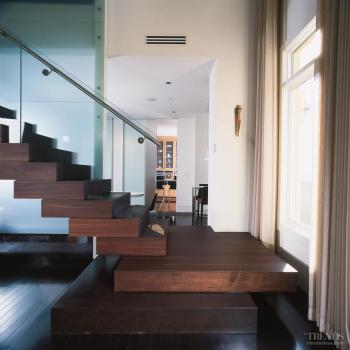 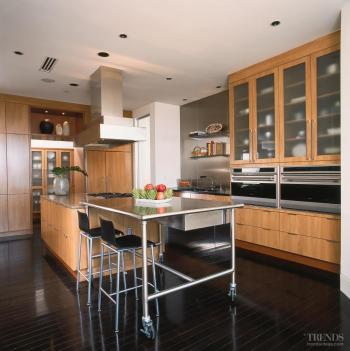 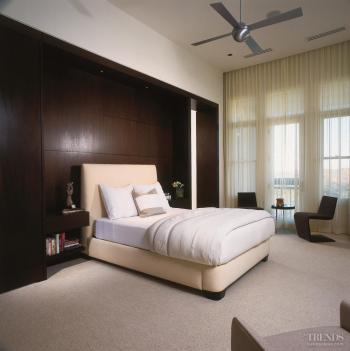 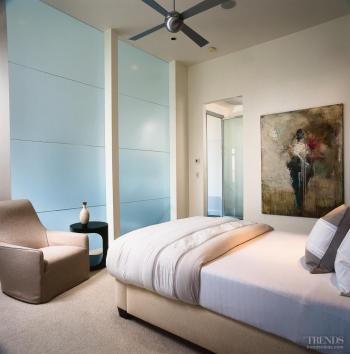 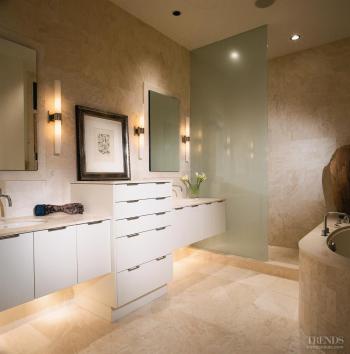 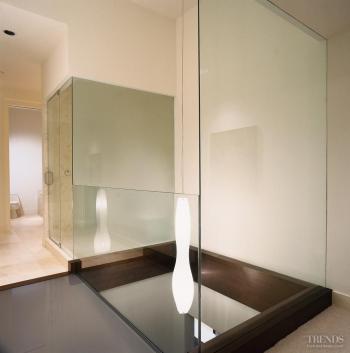 "Rather than close in this space, we decided to make a feature of it," says Vantosh. "It provides a glimpse of what lies beyond – the openness and the glass walls that bring a translucency to the interior."

The entrance to the main living area has a low ceiling, and is lined with mahogany paneling. Vantosh says this was designed to create a sense of anticipation.

"The lower ceiling invites you through the space, which then opens up to reveal the vastness of the light-filled living area and the view beyond."

Taking center stage in this space is the new staircase – a cantilevered design that unifies the three key design elements that feature throughout the interior.

"The stairs incorporate the mahogany wood that we have used elsewhere to add visual warmth to the interior; the glass, which provides the cool, contemporary feel; and the cantilevered design that enhances a spacious look," says Vantosh. "The stairs also work as a separation device, helping to define the dining and living areas."

Vantosh says one of the challenges of designing a single, large living space, is the need to contain certain areas, such as the lounge, the dining room, and in this case, a library.

"We used a change of ceiling height to further define the dining area," she says. "The flooring also helps delineate the different spaces. The mahogany wood is interspersed with concrete strips that mimic the changes in ceiling heights."

A large, double-sided fireplace with a cantilevered concrete hearth helps to visually separate the library and media room from the main living room.

"Cantilevered elements, which also include shelving and cabinets, provide an illusion of space," says Vantosh. "Everything appears to float, which reinforces the light, airy feeling."

Another feature that contributes to this look is the negative detailing around the base of the walls. The reverse of baseboard moldings, this indentation appears as a cut-out channel where the baseboard meets the wall.

To further enhance the light, translucent look of the interior there are frosted glass walls in the second-floor bedrooms and a study overlooking the stairwell. These create a visual connection between the different floors, and allow light to filter in both directions, while still maintaining privacy in the bedrooms.

Walls throughout the house are painted white, but Vantosh says this is not a white house – the architectural features and the use of neutral furnishings in warm tones avoid a clinical look.

"The owners' last house reflected simplicity in wood. This house is more modern, with a very contemporary Italian feel, but again, the wood creates an element of warmth," she says.

While dark mahogany is the dominant wood in the house, a lighter cherry wood features in the kitchen. Flush cabinets and a mobile aluminum table continue the sleek, streamlined theme.

The kitchen can be closed off from the living area by sliding glass doors. There is also a pass-through to the dining area, which is concealed when not in use.

In the master bedroom, mahogany paneling creates a dramatic bedhead. The paneling conceals a door to the master ensuite bathroom. Here, a cantilevered vanity and limestone tiling continue the spacious look.