Read all about it

The meadow on the roof is probably the most readily apparent feature, but this new Seattle library is green to its very roots. It's also an educational tool for sustainable design initiatives

Read all about it Discover this article's resources 0

Public libraries have always been resource centres, but it's usually the contents of a library that educate, rather than the building itself. The new multi award-winning Ballard Library and Neighborhood Service Center in Seattle takes a different approach, providing a hands-on learning experience that goes far beyond the traditional confines of a library.

Principal Robert Miller and project manager Dave Cinamon of Bohlin Cywinski Jackson say that right from the outset, sustainability was the preferred option. But although most new civic buildings in Seattle need to be LEED certified, libraries are exempt due to predetermined budget constraints.

"Public interest, however, meant that green building principles needed to be applied," says Miller. "The key challenge was managing such considerations on a modest budget."

The architects say the design was also influenced by Ballard's Scandinavian and maritime roots – notably the fishing, shipping and shingle industries.

"We wanted the design to reflect that history, but also look to the neighbourhood's future, which is projected to be composed of a younger, more diverse population." 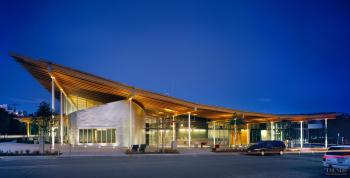 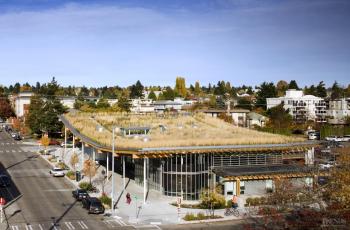 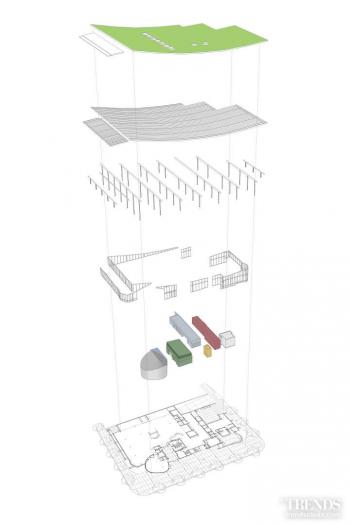 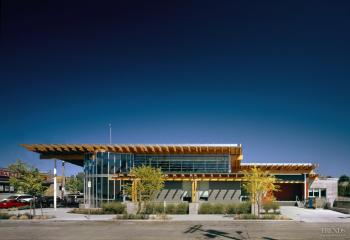 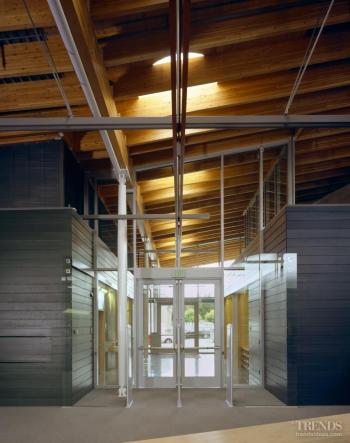 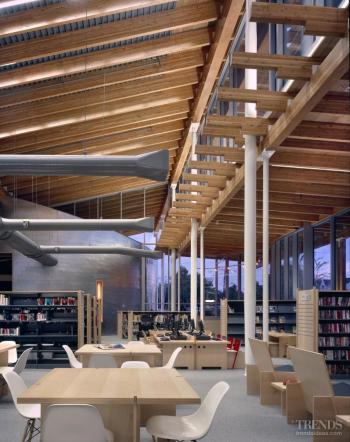 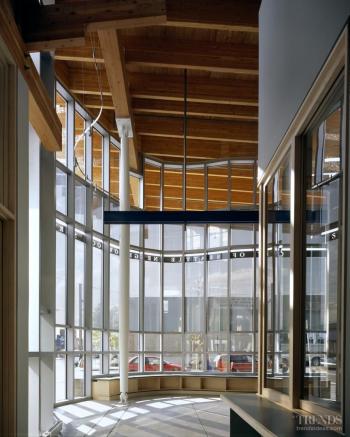 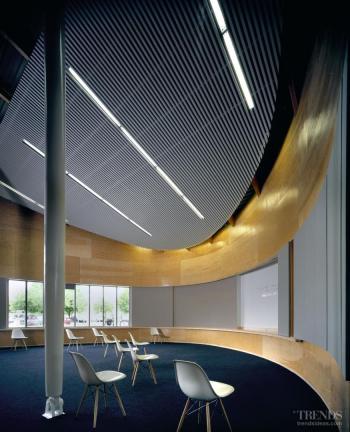 Designed to present a powerful civic face along the main pedestrian corridor, the building exterior features tapered metal columns that support a gently curving plane of laminated wood beams, and a planted grass roof. The roof turns upwards at the northern and southern ends, allowing plenty of natural light into the building. Miller says the shape was also a design gesture to make the roof look like it was floating above the ground. Wood purlins extending beyond the perimeter of the roof help to visually soften the edge.

"The roof is a characteristic Scandinavian feature," says Cinamon. "The pattern of the planting mimics the natural spread of seeds by prevailing breezes. The roof, which incorporates a photovoltaic system, is also one of the more obvious sustainable design features, slowing and limiting rainwater run-off into the storm-water system."

The architects say the planting stops the heat and glare that would result from a conventional steel roof.

"For the residents of the proposed high-rise buildings in the neighbourhood, it will also be more pleasant to look down on a meadow, rather than an expanse of conventional roofing," says Cinamon.

Anemometers that monitor wind speed and direction are integrated into the roof design. This information is coupled with information about light, rainfall and other data, and transmitted to LED display panels inside the library, making the microclimatic conditions created by the building visible inside. A glazed pop-top on the roof, and a periscope also help to educate the public about the environmental features.

Down at street level, the building has a welcoming presence. The entry is pulled back from the street to make a deep front porch that ties together the library and Neighborhood Service Center under the western edge of the roof. Outdoor seating is positioned in groupings that encourage dialogue and interaction, reinforcing the civic nature of the sheltered space.

Glazed walls provide transparency deep into the public areas of the library and service centre. The glazed skin bends around the corners, marking the children's area and service centre lobby as special places, says Miller.

"The glazing in the curtain wall also offers another educational opportunity," he says. "It features a frit pattern of photovoltaic film that provides shading for the service centre lobby. The windows are individually metered, and low enough to allow people to examine the pattern closely, so the effectiveness of the photovoltaic system can be witnessed."

Brightly painted metal channels above the entry mark the spine of the building. A pair of red channels forms a distinct line leading through the lobby and over the reference desk, terminating at a glass-enclosed quiet room. A pair of blue channels parallel to the front of the building lead to the service centre lobby.

"These steel spines not only define the building's key axes, they also provide a way to organise the art component of the library," says Cinamon. "Art can be suspended from the ceiling along these channels."

The exposed ceiling, with its glue-laminated wood beams and rafters, is strongly reminiscent of traditional Scandinavian architecture.

"The building is effectively defined by its various layers, each influenced by a different heritage aspect," says Miller. "The shipping, sailing and shingle industries are all represented. The tall metal columns, for example, resemble ship's masts, and the wood beams recall the importance of the timber industry to the community."

To ensure the timber would not be a heavy, overwhelming presence, the ends of the rafters are notched, helping to diminish their apparent size.

A new cladding material that features on part of the library exterior is also seen inside. Galvanised, corrugated steel shingles clad the exterior of a curved multipurpose room. The room also features a distinctive, semi-elliptical acoustic ceiling framed in curved wood panels.

Rectangular, colour-stained cedar-clad pods within the library contain support spaces, and are aligned on the east-west axis. As with all the materials used in the library, low-VOC finishes were specified for the cladding of these rooms.

"Using natural materials with no off-gassing to preserve the air quality was vital," says Cinamon. "All the furniture was factory finished before it was brought into the library. We also ensured the concrete was sealed so that it wouldn't chalk."

Energy-efficient lighting was another green initiative. Photosensors monitor the amount of natural light coming into the building, and dim the artificial lighting accordingly, ensuring energy is not wasted.

As the perimeter of the library is glazed to provide plenty of natural light, book storage is provided by back-to-back shelving units positioned away from direct sunlight.

"The environmentally responsible design has many layers," says Miller. "It even extended to the speed with which the building went up. We used pre-cast concrete slabs, for example, to hasten the construction period."

In other initiatives, a material made from recycled milk cartons was used to form the concrete columns. And recycled glass, which has excellent drainage properties, was used as backfill against the foundation walls.

The design also ensures the underground garage car park is isolated from the rest of the structure utilising rigid insulation and a floating concrete floor slab to limit heat loss.

"We are always looking for new ways to be environmentally responsible," says Cinamon. "It's a real driver for innovation and creativity – and as this project shows, it can be achieved on a modest budget."