Quiet on the landscape

Quiet on the landscape Discover this article's resources 0

Relaxing on their expansive, sheltered porch, the owners of a rustic mountain home might enjoy relating its history to their guests. Starting by describing the architectural tradition the house alludes to, they soon move to pointing out specific details, reflecting that their home has a character all of its own.

This house is in the tradition of the grand rustic retreats built by wealthy industrialists over 100 years ago in the Adirondack Great Camps in Upper New York State. Conceived in every detail by architect Laine Jones and built with handcrafted precision by Steve Howell, this spacious retreat has many features typical of the style. Constructed from local wood and stone, with a shingled roof, wide overhangs and porches, the house sits comfortably in its remote country setting.

However, there is much about the house that resists a direct comparison. The many gables, shingle sidings, a set-to-one-side master suite, and a recurrent fir-tree motif are just some of the elements that create a highly individual statement.

"I intended this house to have the feel of a whimsical lodge or inn," says Jones.

There are many diverse areas to explore and connect with the landscape, says Jones. "To make the most of the views, the teenagers' rooms, bunkroom, games room and guest suite are all on the lower level – this allows the decks, living spaces and the master suite upstairs to have the best vantages." 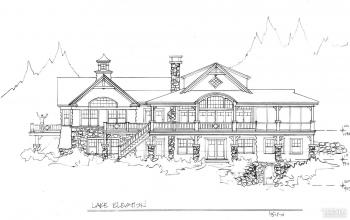 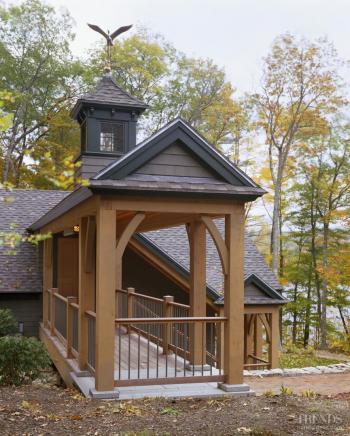 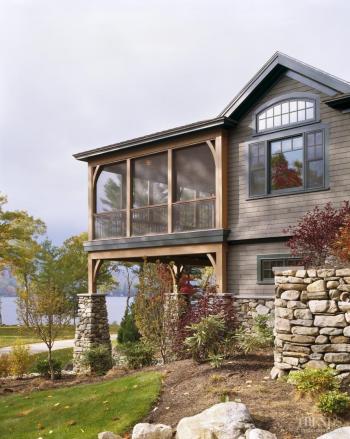 Part of the inviting quality of the approach to the house is due to the care the architect took to play down its impact.

The squat stone piers at the base that make way for slender support posts above, the central skirt line and arch over the deck, the gables, and a cupola on the bridge to the garage, all work to break down the visual mass of the building.

"These details add individuality and give the facade a readable scale," says Jones. "Traditional Adirondack elements such as rising stonework anchor the house to the land – but this house achieves a lighter feel."

This lightness of touch continues on the interior. One reason for setting the children's rooms downstairs was to enable Jones to create soaring ceilings in the great room and adjacent dining room.

Steve Howell says that while the arched cord trusses that support the roof and substantial snow loads in winter are not strictly Adirondack style, they do exhibit the celebrated structure with articulated joinery typical of these great houses and the related American Arts and Crafts style.

"The massive arched beams are formed from a single timber, sliced into eight laminations and then glued back together for greater strength" says Howell. "The twisted black metal kingpins, integral to these four-piece trusses, were made by the Mennonite people."

Appropriate to the home's hand-built ethos, the kingpins were forged without electricity – the Mennonites heated the iron rods with gas torches and twisted them with a transmission from an old tractor.

Tonally, the Douglas fir finishes give the rooms a warm, golden aesthetic. Jones introduced dormers in the ceiling to bring additional light into the space. These are intended to look as if the wood ceiling has been peeled back to let in the sunlight.