How a building will relate to its surroundings plays an important role not only in the eventual design of the house, but also in how the occupants will interact with both. A harmonious relationship between the built and natural environments will permeate all levels.

But achieving a harmonious relationship isn't reliant upon the conformity of one environment to the other – quite disparate elements can be brought together to create a unified whole, much like the house featured on these pages, designed by architect Noel Lane.

"Disparity does not necessarily lead to conflict. The lineal nature of this house serves to make you even more aware of its free-flowing surroundings, and vice versa."

"The formal relationship between the house and surroundings is heightened by the fact that architecture is as much about straight lines as it is about the wider context of setting and spatiality," says Lane.

The setting, however, cannot be ignored and has a more intrinsic role that just that of providing a nice view. 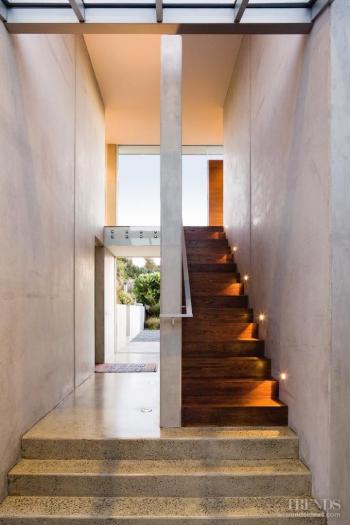 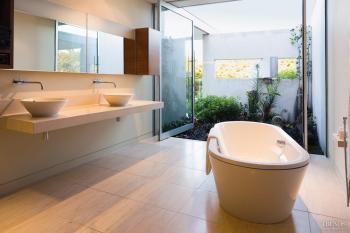 It is also a linking element contributing to the relationship on a subtle level. In this instance it is the incorporation of water into the built environment that sustains the harmony.

Just as water plays an important visual role in the identity of the house, so too does light, with its ever-changing, almost physical manifestation.

"Allowing the light to carve up the spaces means you never get the same sense of the house on a day-to-day – or even on a minute-to-minute – basis. Each person's experience of, and relationship to, the house is unique."

Another relationship, between private and public spaces, was formed due to the property needing to fulfil the requirements of a family home and boutique lodge accommodation.

Lane says the eventual design resulted from the requirement for a greater separation of public and private areas than would be needed in a usual home. The result is two distinct buildings that are linked via a stairway. The main building houses the living areas and master bedroom, the other the guest suites.

The benefit of this intended segregation is that the main building acts as a self-contained home when the owners are there by themselves, says Lane.

The division also gave the architect the opportunity to play with the expected norms surrounding the spatial relationship between public and private spaces, and between internal and external environments.

"The desire to give the house a more intimate relationship with its surroundings raised point-of-arrival issues for its role as a lodge and the need for privacy. The solution was to reinterpret the expectations of visitors. Unlike the more typical open-plan arrival points of visitor accommodation, the public areas of this guest building are sheltered and enclosed. On the other hand, the private areas – the suites themselves – have been opened up to interact with the natural environment."

This means the full extent of the relationship between the house and its setting is unveiled only once the guests enter their room.

"This aspect of the house was used to strengthen the sense of arrival. I wanted to make sure that everything wasn't laid out in front of the guests," says Lane.

For the main building though, the opposite is true, as it is practically laid bare to the elements.

"Every room opens directly to the outdoors. Even the decks and terraces that constitute the outdoor living areas flow straight onto the lawn and down to the water's edge or into the swimming pool.

"The whole front of the house is basically one large veranda, so you get the feeling that you are standing on the edge of the lawn, regardless of which room you are in," says Lane.

The idea of constantly being on the edge of nature strengthens the harmonious relationship that has already been visually reiterated through the extensive use of glass.

It is the amount of glass used that made it possible to construct the house from concrete, says Lane.

"When I started designing the house to feature large sheets of glass and minimal shelter, it became important to counter that with the emotional weighting that a building material such as pre-cast concrete provides. This sheltering element was then warmed up through the introduction of timber – again in a series of lineal features – that are in harmony with the overall aesthetic."