Puttin' on the Ritz

Taking a cue from contemporary luxury hotels, this new master suite brings a little sparkle and glamour to everyday living

Puttin' on the Ritz Discover this article's resources 0

Modernizing this ranch house provided an ideal opportunity to reinvent the master suite. But rather than remodel the existing space, the owners chose to extend the house, creating a new suite where a carport once stood.

Designer Burns Century, who has worked with the clients on a previous project, says the pair liked the idea of a modern, sophisticated interior reminiscent of a luxury hotel suite.

"They loved the idea that their own suite could be an escape, a bit like going away somewhere special," the designer says. "A little sparkle was also required – I envisaged the suite as a jewelry box. The chandelier above the sitting area in the bedroom, for example, is like a pair of sparkling earrings."

The look continues in the bathroom, where glass mosaics and a pearlescent paint finish bounce light around the room. Many of the tiles wrap around a large freestanding wall that separates a tub from the shower area.

"The tiles are a mix of soft, nature shades," says Century. "They provide the only accent of color in the otherwise neutral palette. But there is plenty of visual interest provided by the reflective elements, such as the stainless steel vessel basins. Even the white quartz countertops have recycled mirror flecks that catch the light." 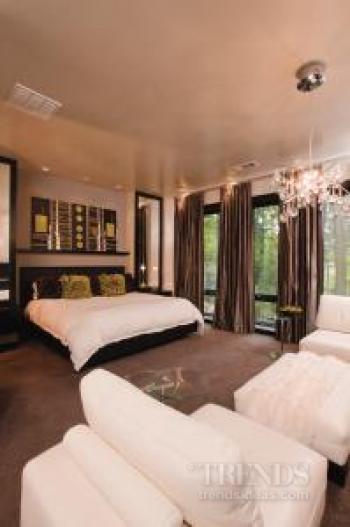 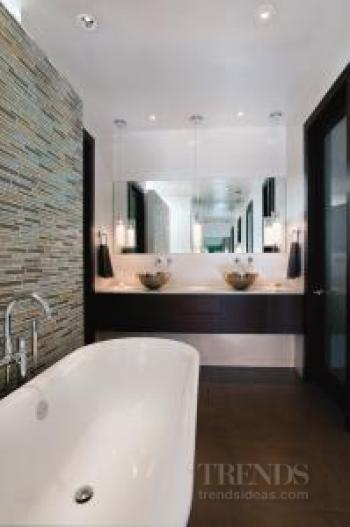 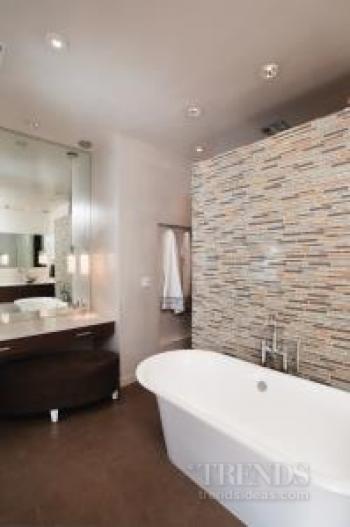 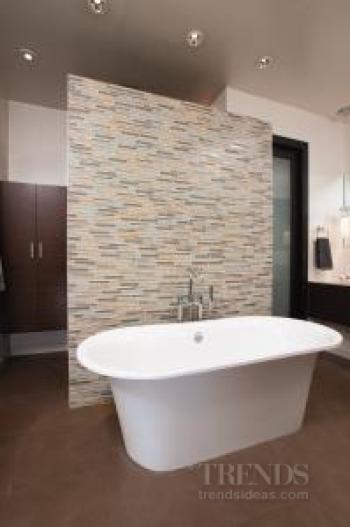 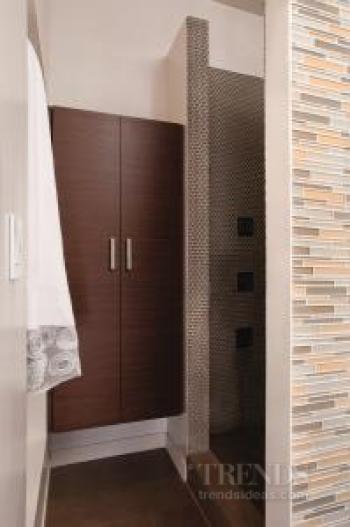 The designer provided cantilevered wenge wood vanity cabinets at opposite ends of the room. One of these serves as a make-up area, complete with an upholstered oval ottoman.

However, it is the freestanding Victoria & Albert tub that forms the centerpiece.

"Sculptural elements bring an artistic feel to a space," says Century. "They also reinforce the modern styling of the ranch house. Here, both the shape of the tub and the pure whiteness enhance the sculptural feel."

Functionality has not been compromised, either. In addition to the vanity storage, there is a linen and supplies cabinet suspended off the wall near the shower.

Robe hooks are provided within a large niche in the wall. Century says placing such accessories within niches keeps items from protruding into the circulation area, which helps to maintain the bathroom's crisp, clean lines.