On the outside, white aluminium screens recreate the outline of a suburban gable roof – before all is then revealed on the inside

From the architect Architects EAT
Photography by Derek Swalwell

This new single residence in a suburban street in Kew, Melbourne responds to the north-facing orientation to the street. The house is designed to occupy two-third of the width of the site, with the remaining one-third for the garden positioned to receive maximum northern daylight.

The external white aluminium screen forms a singular mass in the outline of a suburban gable roof, subtly referencing the immediate neighbours in both form and colour. The screen holds in suspension the visitors’ first experience of the house - as one passes along the façade towards the entry, it deconstructs to reveal the concrete bodies in a journey of discovery and surprise.

The entry sequence finishes in a recess, with raw concrete beams cantilevering out to provide partial shade, hanging plants from the gutter and grasscrete paving below, together with tactile rough concrete.

The internal spatial volume is defined by the three repetitive in-situ shotcrete concrete vaults and off-form gutter beams. This cavernous volume receives direct daylight that changes by the hour and season, or nuanced indirect ambient light on the curve of the textured north facing vaults. 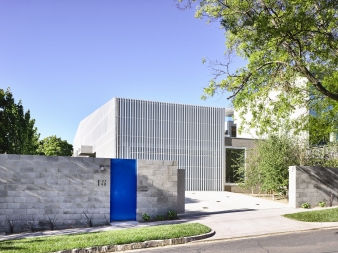 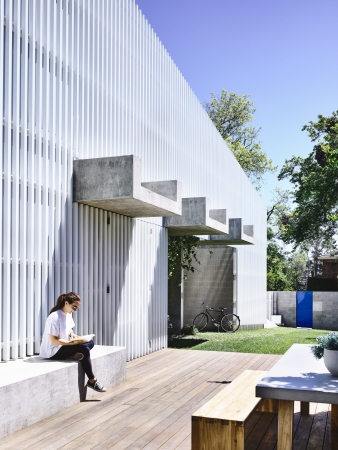 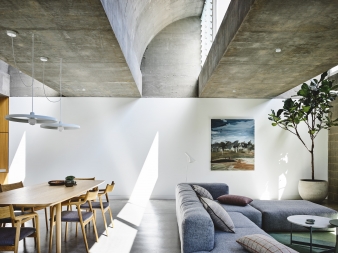 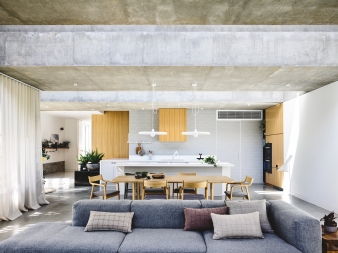 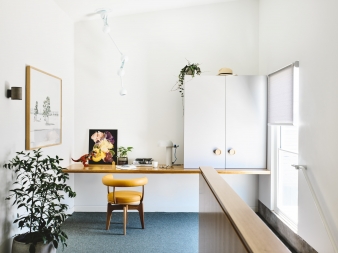 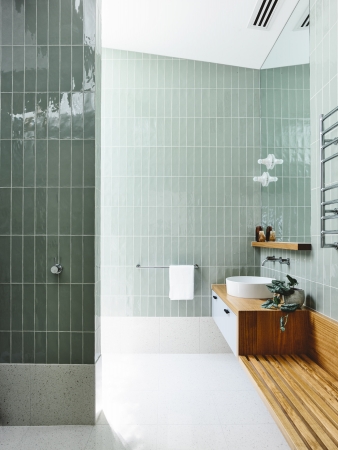 The interior is fully glazed to the east with bi-fold doors and windows with in-situ concrete seats. In fine weather, it can be fully opened up to the garden, allowing exposure and interaction with the outdoor space. Cross ventilation is also aided by these openings together with the glass louvres at the height of clerestory in the vaults.

At dusk as the sun sets to the west, lights cast a faint silhouette of the vaults onto the white screen, displaying the geometric form briefly, before the internal glow of artificial lighting transform the street façade into a lantern.