Choose a job you love and you will never have to work a day in your life – Confucius was way ahead of his time when he coined that phrase more than 2000 years ago. Creating a work environment that fosters such passion is in fact a very recent development, one that is epitomised by the fit-out of the new Lion offices in Homebush, Sydney.

Designed and built by Project Control Group (PCG), the Lion workplace needed to integrate staff from the dairy and alcohol businesses into one location – people were coming from the Quad building at Sydney Olympic Park and the brewery office at Lidcombe. As well, the new office was integrating back office facilities that were previously in Docklands, Melbourne.

"This is all about sociability and wellbeing," he says. "It applies equally to Lion people who work in the office, to new talent we are recruiting, and to our customers and visitors who frequent the office. The office needed to reinforce what we want to be known for – great people and great brands." 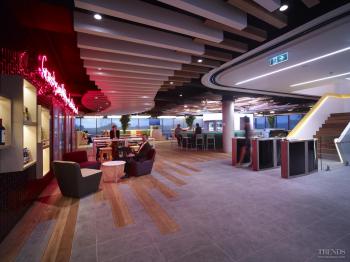 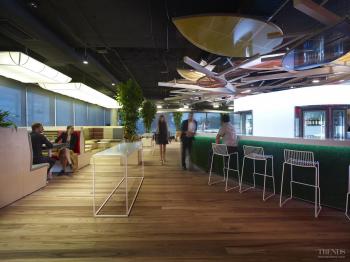 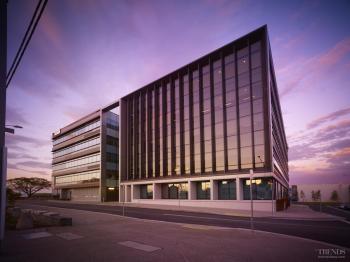 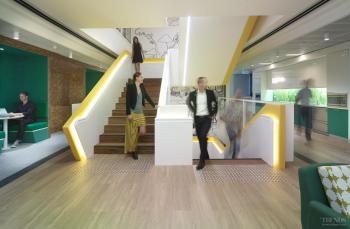 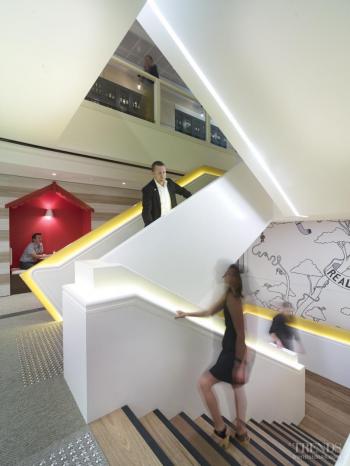 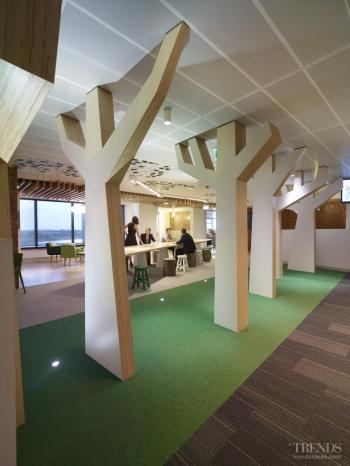 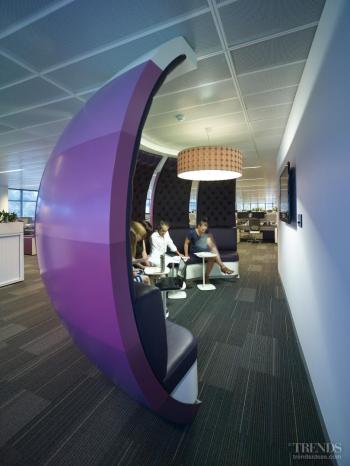 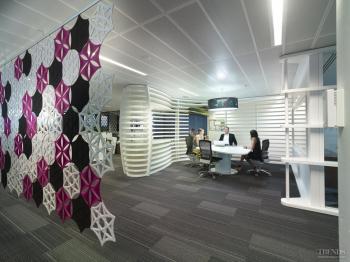 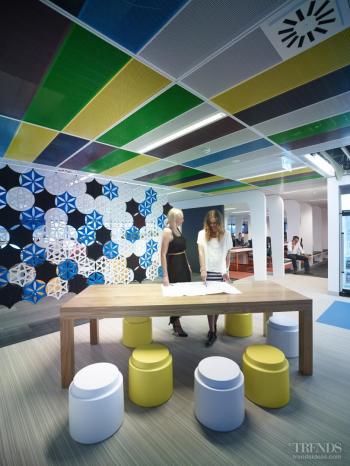 "The manifesto determined that the workplace needed to spark passion and creativity," Gunnis says. "It had to be a significant environment that would attract and retain premium talent. We also needed to address issues of brand consistency and sustainability, and design a workplace that would promote and enable increasingly flexible and mobile work styles. The office needed to support both formal and informal communication, providing plenty of opportunities for interaction."

Gunnis says PCG worked closely with the Lion People and Culture team, which provided feedback from workplace questionnaires and workshops.

"It became clear that the office needed to be a hybrid solution of allocated and non-allocated work points. While some people required fixed desks, others came into the office less frequently and were happy with a hot desking arrangement. But it was essential to provide alternative work areas, or settings, so people could choose the space that worked best for them on any particular day."

"It was important to create an identity for each floor, one that would determine the colour and design theme throughout. We chose to draw from a range of iconic Australian environments. For example, the ground floor, which is a reception and hospitality area, is the Beer Garden. Other floors feature the Lounge, the Park, the Beach and the Vineyard. And because the floors are so large, we have another themed area on each office floor, on the south side – the Jetty, the Pool, the Backyard and the Laneway."

The Beer Garden reception area epitomises Lion's desire to promote sociability – the venue is regularly used for social events, such as pre-match functions, and by staff during the day. A large circular bar takes centre stage. In keeping with the theme, the front of the bar is clad in artificial grass. Ceiling services were left exposed to maximise the height, but painted black so the ceiling appears to vanish like the night sky.

"Suspended timber blocks beneath this ceiling are reminiscent of a curved garden path of railway sleepers – they lead the way through the space," says Foung. "We also added a stylised leafy canopy above the bar and furnished the space like a beer garden."

Other amenities on the ground floor include a training/auditorium area, meeting rooms, coolroom and storerooms, gymnasium, change rooms and masseuse rooms.

A central staircase was an essential part of the interior design brief. Gunnis says the interior is all about connectivity, both literal and visual.

"The central stair needed to make a statement, and provide visual continuity through all levels. This is achieved by the scale of the stair and its associated penetration, and by illuminated yellow banding on the solid white balustrade."

PCG project manager Dan Jones says the openness of the stair was only made possible by adding the operable Won Door fire rating system, on special tracks, to each level. When the building is in fire mode, these concertina doors close automatically, but are hidden from sight at other times.

PCG also introduced landmark features to the top of each stair and at the lift entry on each floor. Niches for small meetings are lined with themed colours – the niche on The Beach floor resembles an iconic, gable-roofed beach hut. Bold graphics are also in evidence on every floor, and breakout areas are both colourful and sculptural. Space dividers include snowflake partitions, ribbed walls and curved pumpkin-inspired freestanding meeting pods.

"Lion required something different and was happy to introduce a sense of fun to the workplace," says Foung. "All these non desk-based settings might not be perceived traditionally as productive spaces. But Lion is empowering its people and encouraging them to use these areas to optimise specific tasks or objectives."

Gunnis says that while these activity-based workplace options are very new to many of the people working in the office, everyone is quickly becoming acquainted with the whole notion of having choices, flexibility and mobility.

Jones says PCG installed a raised floor throughout the entire building to accommodate changes to work settings and services as dictated by future dynamics in the business.

"Much of this fit-out, including the raised floors, references our earlier design for the existing Lion head office in York Street, Sydney. That project paved the way for what was to follow."

"We have ensured there are sightlines right through the office and out the windows. No matter where you are, you can almost always see into the distance, which at Homebush is a long way."

Gunnis says PCG adopted a best practice policy for sustainability, building on the initiatives developed for the base build, which targeted a 6-Star Greenstar As Built rating and 5-Star Nabers rating. These initiatives include solar panels on the roof that produce 25% of the base building's energy requirements, and chilled beam thermal control in place of traditional air conditioning.