With the kitchen so much a part of modern living today, it's not surprising that a kitchen designer working on a new home has a significant role to play.

When Matthew Quinn of Design Galleria was commissioned to design the kitchen for this new traditional house by Clay Chapman of Period Architecture, he could see there was an opportunity to accentuate an elevated brick fireplace that was one of the key features of the architecture.

"The brick fireplaces are the first elements to be built in Chapman's houses," he says. "They are always distinctive, and it made sense to align this fireplace up with the front door and kitchen cabinetry. To do this we shifted the stairs slightly. Now you enter into a double-height grand foyer, move through a lower, vaulted space and then pop out again into the kitchen and family area with its high ceiling."

Quinn says in this family it is the retired husband who is most interested in cooking.

"The kitchen is essentially his laboratory,"he says. "He loves to go to the farmers' markets, buy fresh produce and come back and experiment with various foods and sauces. So it had to be a great kitchen to work in." 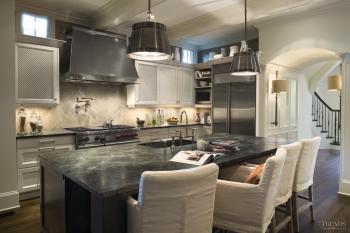 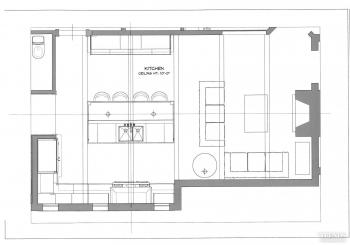 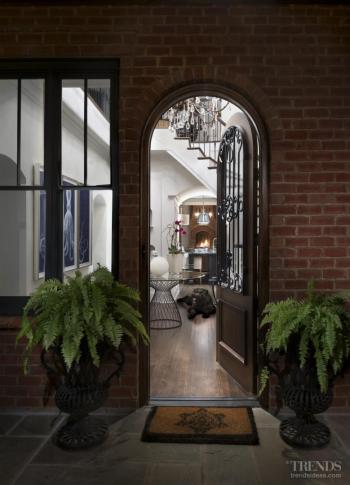 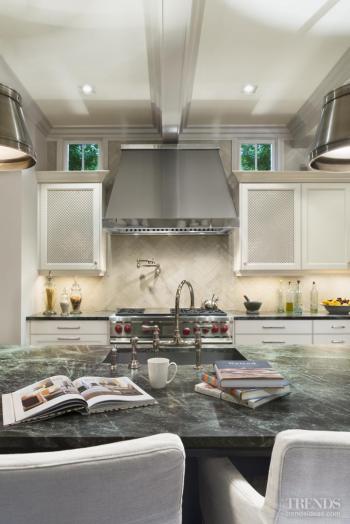 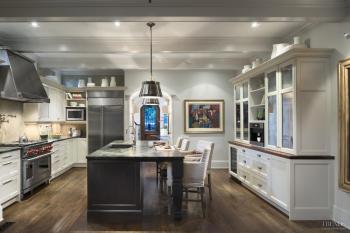 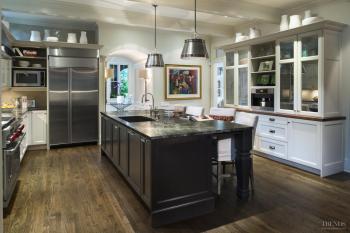 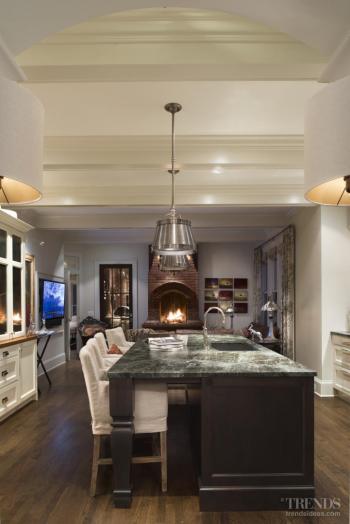 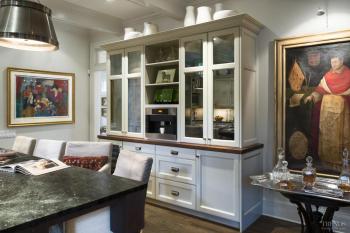 For this reason all the food prep and cooking can be carried out on one side of the island where there is an easy work triangle between the sink, refrigerator and oven.

On the opposite side of the oven is a large, decorative hutch that functions as a bar, with ample storage for wine, liquor and glassware. Inset antique mirrored panels and a black walnut countertop on the hutch enhance the traditional, furniture-style look of the cabinet.

High clerestories bring natural light into the kitchen – these are the only walls in the kitchen as the house is close to the neighboring property on this side. The clerestory windows also allow a pleasant leafy view of the treetops for family and friends seated at the island.

"Because the island was designed to form part of that axis through the house, we gave it a dark ebony stain, rather than painting it white, like the perimeter cabinets," says Quinn. "Being dark it appears to have emerged from the dark wood floor – it certainly doesn't detract from the sightline.

"The client loved the look of soapstone, but it is not a practical surface for a kitchen, so we found a granite slab that looks very like soapstone, but has the added functionality."

Overhead cabinets either side of the cooking center have a wire mesh accent. This wall is further enhanced by brick-style, white-painted tiles laid in a herringbone pattern, another traditional touch.