From out of the ashes of a fire that destroyed everything in its path, a new home honoring the modernist tradition has emerged

A decade ago, this area overlooking the Pacific was decimated by fire, and the home on the site that is featured here was reduced to smouldering ashes. But this enviable location, boasting both ocean and mountain views, was too special to leave vacant. Architect Stephen Kanner was commissioned to create a new home in the wake of the devastation.

"A dramatic landscape called for an inspirational home, which is why we opted for industrial, rather than indigenous materials," Kanner says.

The house consists of two cubes that are joined together by a stairway – a simple design that challenges the complexity of nature.

"We've juxtaposed the geometric form of the house with the rugged hills that surround it to create drama and power," Kanner says.

White ceramic subway tiles interspersed with aluminum window frames form a clean, linear exterior. The large spans of glass offer a transparent view of the countryside, blurring the division between structure and nature. 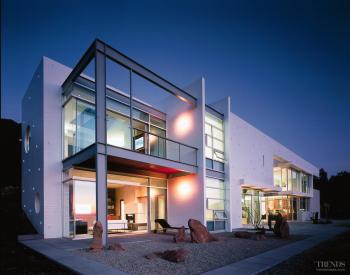 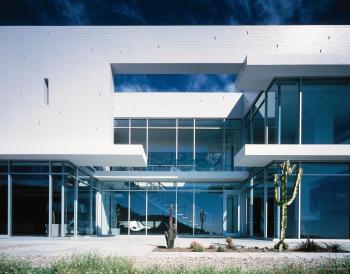 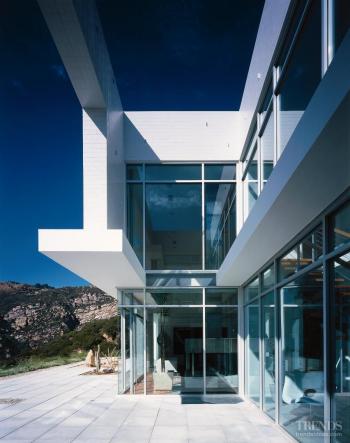 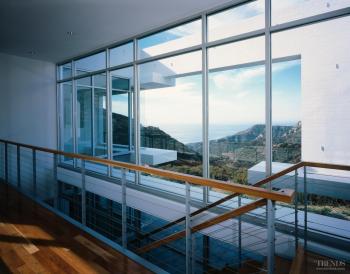 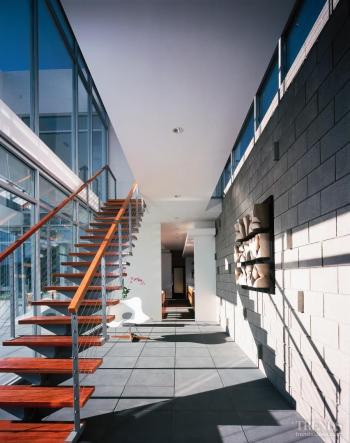 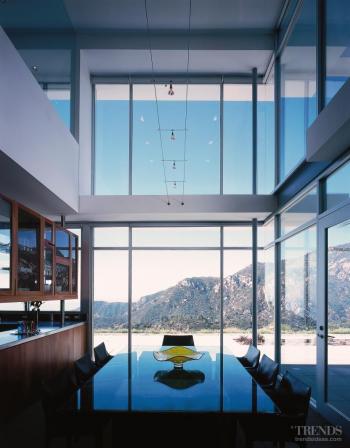 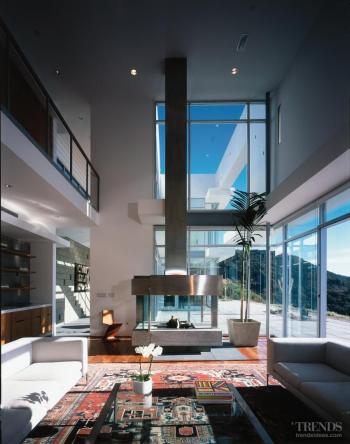 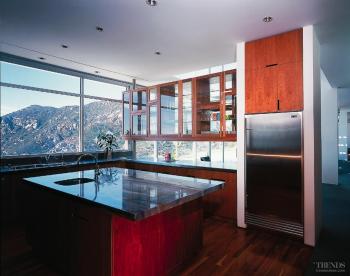 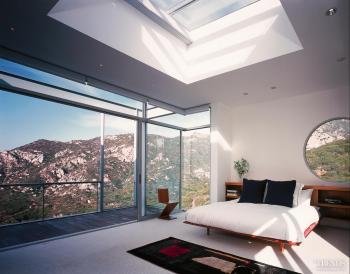 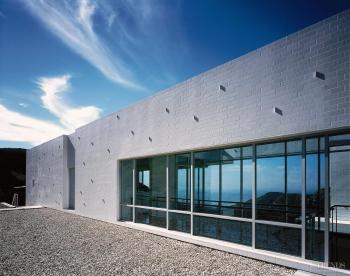 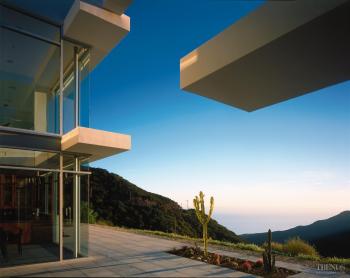 "The style of this home, both in the materials that have been used and the design itself, has been influenced by outstanding examples of modernism. These homes have proven over time to be extremely distinctive, practical and comfortable living spaces," he says.

Kanner also found design inspiration in the owner's profession – dentistry. He says the white ceramic tiles on the exterior have the sensibility of a tooth, pristine and gleaming.

In addition both tiles and the aluminum window framing are fireproof materials.

Inside the house, this texture is echoed in the concrete block wall that runs the length of the structure. This retaining wall has been left exposed to form an industrial-look feature along the corridor. At irregular intervals, concrete blocks protrude from the otherwise regular pattern.

So that maximum advantage can be taken of the view, all the rooms, including the two bedrooms and exercise room have windows facing to the front of the home. The house is orientated to the southwest, at the angle with the brightest exposure to sunlight, so micro-shades made from a plastic mesh can be rolled down to protect the interior without blocking the view.

"As the house is effectively only one room deep, you are constantly aware of its setting. It is this combination of the power of the mountains with the serenity of the ocean that makes the scene so breathtaking," Kanner says.

The dining and living room face each other across the central courtyard, their glass walls stretching the full two stories of the house. These tall, majestic rooms echo the mountains that surround the home, Kanner says.

A distinctive material palette featuring a mix of cool industrial and warm domestic surfaces, add depth to the interior. Three different types of marble have been used in the home – white marble in the bathroom, blue marble in the kitchen and matte-black marble for beneath the hearth.

While harder surfaces dominate in the public areas on the lower floor, softer materials have been used upstairs. For example, the floor in the great room and dining area consists of 2ft x 2ft concrete pavers, while the bedrooms above have been carpeted. Connecting the two stories are cherry wood stairs enclosed in a steel frame.

"We've used a mosaic of textures and surfaces. If we had restricted ourselves to cutting-edge modernist materials it would have made the home too cold. We didn't want the experience to be like living inside a refrigerator," Kanner says.

Landscaping in front of the house features a Zen garden with three distinctive arrangement of stones representing the owner and his children and his interest in Eastern philosophy. The house has been named Simpatica Sem – a combination of Italian and Tibetan words that means the blending of the mind and the soul.